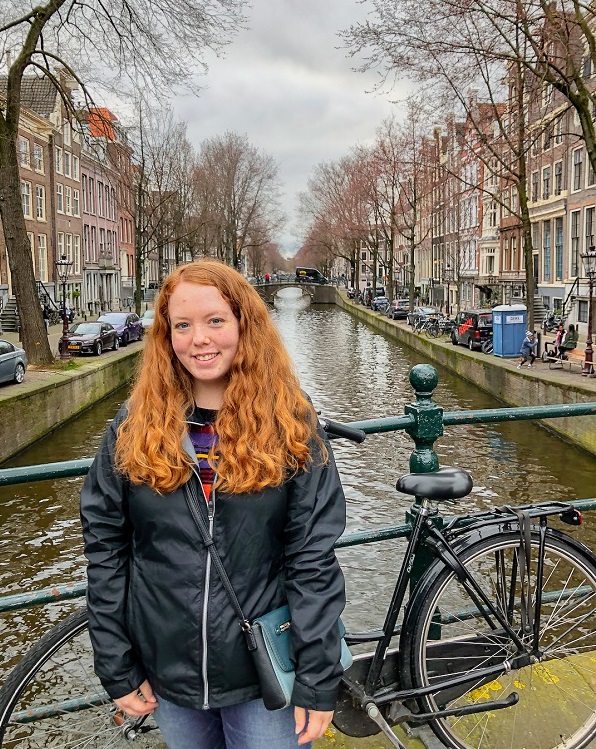 While you can no longer take a selfie with the iconic “I Amsterdam” sign, due to its removal in 2018, there are still many things that you are able to do in this sparkling, canal-abundant city that will make you say, “I belong here.” From touring notable sites and museums, to casually walking down beautiful brick-coated and bicycle-ridden paths, you will surely find yourself falling in love with Amsterdam. To help you out, I’ve compiled a list of my top five favorite memories from my weekend trip there, in which I have faith that you will enjoy yourself.

5. Indulge in a Stroopwafel (and go to Dunkin’ Donuts)!

I know what some of you are thinking––that you already know to do this. But, seriously, it’s a real treat. Admittedly, I felt a little sick from already consuming too much sugar on the day I had one, but my friends really enjoyed theirs in full. These are basically thin waffle sheets spread out between a layer of caramel goodness. Based on what I did consume, however, I could easily see myself walking after class to head on over to grab another one (or two, for later). This would probably become a habit of mine, but at least I could choose between three different sizes (small to large), to help myself feel a little better about my sugar intake. Also, I must inform you that Amsterdam has an abundance of Dunkin’ Donuts locations––not just cyclists. This made me so happy, since I was going through some withdrawal in Galway from not having my usual iced caramel latte. In other words, you will not be short of sweetness while visiting or living in Amsterdam. 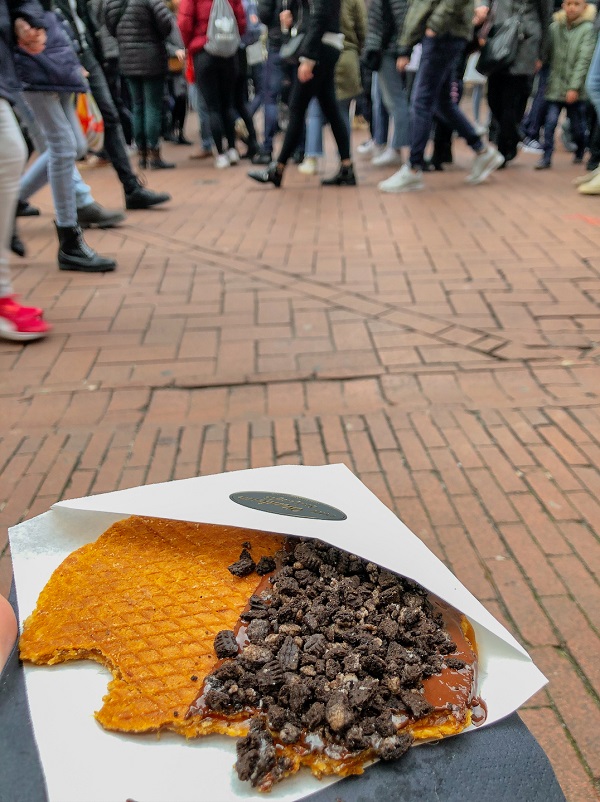 I realized before that I was in a city, but I didn’t feel as connected to Amsterdam until I stepped into this area of it. Here, I got to see a woman blow bubbles and a flock of birds take over the ground and secure their territory. This area is especially fascinating for those who desire to just take a moment to pause and reflect on the many paths and people in this life. Also, the Royal Palace is seriously one of the most beautiful works of architecture I have ever seen, and it provides a grand background to the city’s brick-coated and dreamy landscape. I would recommend that you make a stop here––even if it is only for a few minutes, or on your way to another area in the city. 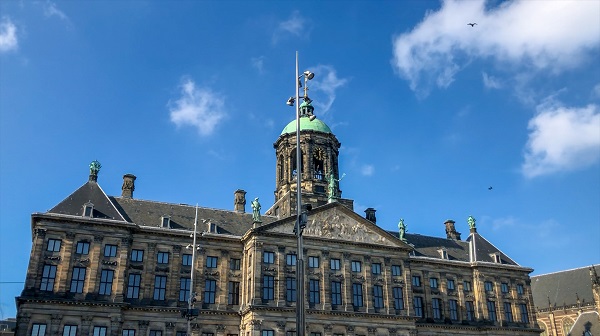 3. Find the Bench from The Fault in Our Stars

I write this to you with caution: the actual bench used in the movie is no longer there, but another one has since taken its place, so you can still say that you have been there and take a seat! To refresh your memory: this scene is one of the most heart-wrenching and tear-jerking moments in the movie, where Gus reveals to Hazel Grace that his cancer has returned. I felt slightly uncomfortable posing on this bench, given the context, but as a fan of this movie, I really wanted to find it. However, my friends and I were so busy looking for the original dark green bench that we walked past the spot entirely our go-around, only to return about 20 minutes later. I have to say, though, getting lost provided us with some more picturesque opportunities (like the main photo for this article!) that we would probably not have had without this happening to us. I eventually put my detective journalist skills to the test and paid attention to the background, instead of just the design of the bench itself. I also took a pause from writing this to re-watch the scene, so to distract myself perhaps we should continue with this list. 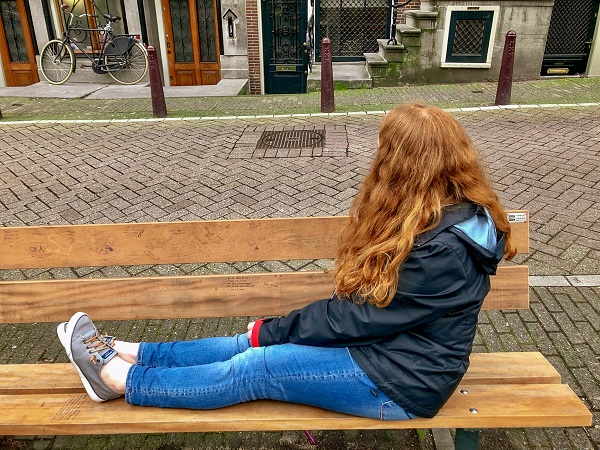 2. Go on a Canal Cruise––and Take in the Sights

My friends and I did this during our first morning in Amsterdam, which provided us with a good feel for the city. Even though it was colder than it was in Ireland the days prior to this, we wanted to sit outside in the back of the cruise to truly feel there. We were awakened by the bone-chilling breeze and took in all the sights and scenery. There was also a guided audio tour that we got to listen to, which steered us toward some fascinating sites including the NEMO Science Museum, and introduced us to the high and narrow canal houses and boats in which people actually live. I find this interesting, especially since tourists like us pass by their homes only briefly, whereas life on a canal is the start and end to their every day. While I love the idea of living near water, I’m not too sure how much I would enjoy living right on it. But I would love to see these canals all the time, so I find it awesome CEA’s new program here makes this possible for students. 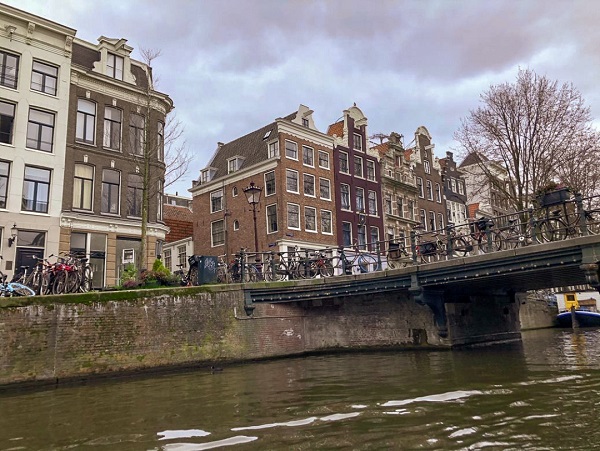 I must caution you again: make sure to buy your tickets in advance, because the bulk of them will probably sell out before you know it. I would strongly advise going to the Anne Frank House, because it’s an experience that I'll keep with me and reflect on for life. Also, I realize that I’m a writer, but I’m not too sure of the words to describe this visit other than eye-opening and self-removing––because, suddenly, none of the trivial complaints in my life felt like they mattered. I walked through the actual house that Anne Frank and her family hid in during WWII, and it did not feel like I was really there. This is an important historical preservation for people to see and recognize, which is why it places number one on my list.

I am so glad that I was able to visit one of my top travel destinations in Europe, and I really hope to return someday. There is still so much that I want to try (including Dutch fries!) and see (including the Rijksmuseum and Van Gogh museum!), so I know that I will somehow make my return happen. For now, I strongly urge you to investigate either visiting or living in Amsterdam during your own experience abroad––and to possibly get the chance to come up with your own top five experiences.

I was so happy to learn about CEA’s new program in Amsterdam, which makes the opportunity to go there even more likely for you! Instead of trying to cram everything that Amsterdam has to offer in one weekend, you could live there and do more than just the five items on this list. You could spend your days cruising along the canals instead of only taking a guided tour. Can you picture yourself here? For more information, click here.