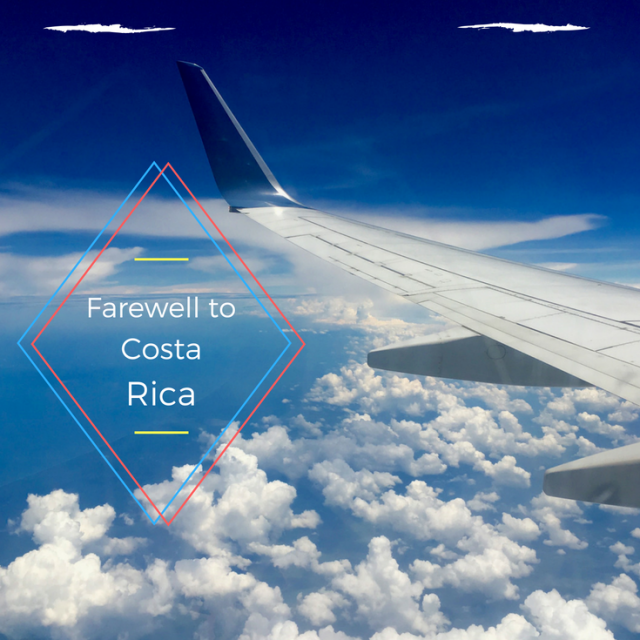 Well, this is it. I have a couple more weeks in paradise, until I make the flight back home to the United States. Every day I wake up, it still blows my mind how I am still in Costa Rica. I just passed the three-month mark, but going over the rules of the house seems like it happened yesterday. Here's how studying abroad has absolutely changed my life.

Let’s go back to that first day, when I arrived in Costa Rica. One of my ultimate goals was to improve my Spanish. When people asked me, “Habla Español?” I would reply with, “Un poco”. Fast-forward thirteen weeks, and I now respond with an exclamatory, “Sí!” Granted, I’m not quite as fluent in Spanish as a native now, but nevertheless can definitely hold an interesting conversation with somebody (as long as they’re not speaking a mile a minute). Actions such as ordering food, talking to Uber/taxi drivers, or simply talking to my Tico family about their day have become second-nature to me. My advice to learning a second language abroad: practice at every opportunity you get, because looking back, I could have learned a lot more merely by being more sociable.

More than just the Spanish, I’m going to take home some values that “Ticos” have instilled in me. At the end of each of my blogs, I write, “Pura Vida”. These words mean so much more to me now than they did when I first arrived. Aside from hearing these words every day, I can see that the people who live here are more laid-back and stress about little things much less. I envy that because often times, as Americans, I think we get caught up and don’t take a moment to realize some stressors just aren’t worth it. I just watched a national geographic video that said that Costa Rica is the happiest country in the world. I believe it!

I have been truly blessed by some of the experiences I’ve gone through during my four months in Costa Rica. My adventures range from bioluminescent kayaking, swimming in hot springs under volcanoes and going (literally) from coast to coast. I value my experiences because I felt free, relaxed and happy as can be. I literally have never had so much fun in all of my twenty years of existence.


Last, But not Least

Studying abroad has given me two things that mean so much more to me than experiences or souvenirs. Living on my own and practicing the native language has made me more confident and independent. My confidence grew gradually in the time I’ve spent abroad, because I was often put in situations that I was unfamiliar with. I have made plenty of mistakes with my Spanish, but looking back I gained more poise and control because of my slip-ups. And although I have met plenty of friends, things like time-management, studying, speaking with my family and even writing blogs were all done alone. With newly acquired confidence and sense of independence, I will enter the healthcare field motivated to practice my new skills.

Studying abroad may seem scary, but I encourage everyone to try it! Take a risk and I promise you, it is much more rewarding than I can put into (any) language. I had the time of my life!


Andrew Mantone is the Fall 2016 CEA MOJO Blogger in San Jose, Costa Rica, and is currently studying at Philadelphia University.
Leave a comment
Newest on top Oldest on top
Load more comments
Thank you for the comment! Your comment must be approved first