My name is Micaela Brown and I attend Xavier University of Louisiana. I am a sophomore public health major from Memphis, Tennessee. I studied abroad the summer following my freshman year in San José, Costa Rica! I spent a month in Costa Rica and made so many memories while there.

I have always enjoyed chasing adventures and exploring new cultures! I have been to Costa Rica once before, so once I learned about the medical Spanish course my university offers I knew I had to take advantage of the opportunity. I thoroughly enjoyed my month abroad. I not only took a class on medical Spanish but I also strengthened my Spanish speaking skills, explored the country, and made some amazing friends. 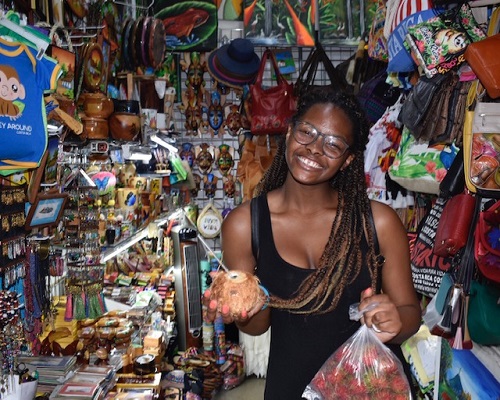 One of the most impactful parts of the trip for me was the homestay. Living in a home with native people immersed me in the culture and made me appreciate it more. My host mom was super sweet and did everything she could to make me feel comfortable. We even had sing-alongs and danced together after dinner every night. She spoke no English but we were able to communicate efficiently. The Spanish course I was taking while there also helped tremendously. The relationship we built was amazing, and we are still in contact now.

The Spanish course I took while in Costa Rica played a major role in my trip. The course was aimed at learning medical vocabulary and how to effectively communicate in medical settings. I did not realize how quickly I would put what I learned to use until I began shadowing medical professionals in various hospitals and clinics throughout Costa Rica. The most memorable experience I had using what I learned in the classroom occurred one morning when I was shadowing an emergency room doctor. A lady who had come in was complaining that she had many symptoms of the flu. We had just covered that chapter in class a couple days before, so I easily followed along and was able to ask her more questions and to describe her symptoms in more detail. We had also recently covered the various types of specialty doctors. The emergency room doctor asked her of all her symptoms and then asked me what I thought it could be based off of what I understood. We both thought it was the flu; however, the doctor continued to evaluate her. After further evaluation, he noticed that her lymph nodes were swollen and recommended her to an ear, nose, and throat doctor. Later that day, I was given the opportunity to speak with the otolaryngologist and we discussed various symptoms and illnesses he had seen in his many patients over the years. After that experience, I began to dive deeper into my medical Spanish course in an attempt to learn everything I could before I left. I wanted every moment to be like that one, and they all came pretty close. The excitement that came with understanding the patient and being able to communicate with them has been unmatched. The opportunities I was given by my university and CEA were amazing! They encouraged me to learn more on my own and even look into studying abroad again. I thoroughly enjoyed my summer and the many memories that came with each adventure.

Micaela Brown is a CEA Alumni Ambassador who studied abroad in San Jose, Costa Rica, during Summer 2019. She is currently a student at Xavier University of Louisiana. Micaela Brown is the Summer 2019 Alumni Ambassador in San Jose, Costa Rica, and is currently studying at Xavier University of Louisiana.
Leave a comment
Newest on top Oldest on top
Load more comments
Thank you for the comment! Your comment must be approved first