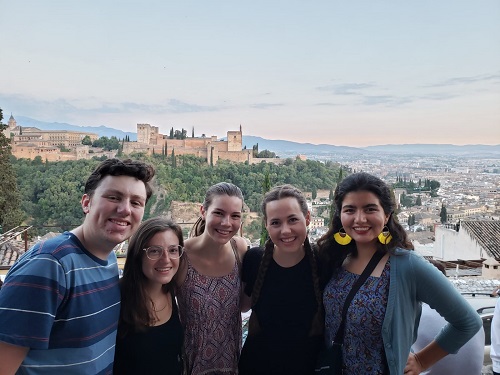 Many college students dream of studying abroad. Many also choose not to fulfill this dream because they wonder how they can still graduate on time. Going into this whole experience, I really had no idea what I wanted to do or if it would even be possible to go abroad during my educational career. After deliberation and lots of doubts and questions, I decided to at least look into education abroad for the summer of 2019. I wanted to keep on track with my Zoology major but also practice my Spanish for my minor. Plus, I just really wanted to spend time in a beautiful foreign country! My first thought was, Wow, I would love to go to South America - Valparaiso, Chile, or Cusco, Peru. Either of those choices would have been amazing and fulfilling, but the course selection was too small to be able to fit into the requirements of my minor. So… I investigated programs in Spain. The course selection seemed very well-developed, interesting, and diverse.

I found a program I wanted after several months of researching: Spanish Language and Liberal Arts in Granada, Spain, with CEA. They offered an extensive variety of classes for an advanced Spanish-speaker. That was one of the biggest challenges when looking into education abroad for Spanish -- many programs only offer classes for intermediate or beginner speakers. I remember looking at the CEA Granada program and being so pleasantly surprised and also intrigued. When I examined the list of offered courses, I saw “Spanish and Islamic Culture in Spain,” “Spanish Business Law,” “Spanish and Latin American Literature,” “High Advanced Spanish,” and so many more options. Wow, this was so perfect for me! Not only did they offer a large number of options, but also a diversity of courses that interested me. My interest was especially captivated by the Spanish and Islamic Culture course. I have always had a passion for learning about other cultures, and this class offered two very different cultures mixed into one class. Granada, Spain, was also the perfect place for me to study because of this important mixture of social values.


So, I applied to study abroad in Granada, Spain, and began my journey with CEA and the wonderful staff there. Going to class in Granada was such a dream. I would walk through the city every day to school - about a 25-minute walk - taking in every bit of culture and fresh-air that I could. This walk was a learning experience for me in and of itself. I had never really traveled before, never seen a new culture outside the United States, but here it was. Every day, I was able to see beautiful European architecture: tall buildings, intricate, carved statues and fountains, old Arabic streets, and giant cathedrals in the heart of the city. Everything was truly amazing and breathtaking.

After this beautiful stroll through the city, I would arrive at the school. “El Centro de Lenguas Modernas” is a branch of the University of Granada for foreign students; I loved the atmosphere of the school. It was so open, welcoming, and full of students from the United States, Australia, China, France, and many other countries. I made so many friends from all throughout the U.S. - California, Florida, Idaho, Tennessee - that I never would have met otherwise. I loved that this journey overseas helped to build a network of people from entirely different backgrounds in order to share interests and experience adventures together in a foreign country. I also thoroughly enjoyed my professors. I had seven different professors for four intensive Spanish classes that summer: High Advanced Spanish, Spanish and Latin American Literature, Geography and History of Spain, and Spanish and Islamic Culture. Each of my professors shared their unique insights and national pride, and it was so refreshing to have perspectives of educators other than those of the United States.

I also left Spain after ten weeks as a bilingual Spanish-speaker. There are 9 levels of proficiency of Spanish that the University of Granada follows: level 1 being beginner and level 9 being proficient. I placed into level 7 when I arrived in Spain and ended up returning to the U.S. in level 9. This was such an exciting accomplishment for me. Traveling to a foreign country for several months allowed me to take classes, practice my Spanish, and finally feel extremely comfortable conversing in a second language. Upon returning to the U.S., the credits transferred from the University of Granada to my own university. I met with my advisor to transfer credits, and every class was able to transfer the way I had hoped. I had completed a total of 12 credits in one summer: three 300-level Spanish classes and one 400-level class. At this point, I was completely done with my minor in Spanish. My advisor told me that I only needed four more Spanish classes to be able to major in Spanish. Amazing! Not only did I go to Spain for an entire summer, but now I could easily double major in both Zoology and Spanish. I would only have to take one Spanish class per semester and continue with my Zoology classes without any new obstacles.


Although I would have loved to study abroad for a semester or a year, it is almost impossible to double major and do this without pushing back a graduation date. At the end of this journey, I was able to change my Spanish minor to a major and still graduate within four years. Studying abroad during the summer allowed me to excel in my educational career while experiencing a very worthwhile international adventure. It also helped me to come to important career realizations; education abroad opened up my world and has helped me hone my interests and passions for travelling and cultural studies. I would love to continue in a career with international affairs, study abroad, or teach English in a Spanish-speaking region, such as South America. Hopefully I can also pair my two majors and one day work in an animal rehabilitation center in a Spanish-speaking country.

Ashley Cialone is a CEA Alumni Ambassador who studied abroad in Granada, Spain, during Summer 2019. She is currently a student at Colorado State University.