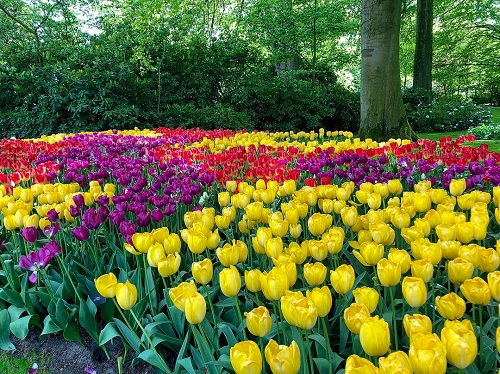 It was the best of times... Actually, it was just the best of times. Seriously, you’ll fall in love with Amsterdam and Budapest. I studied abroad for a full academic year of 2018-2019 and was fortunate enough to have the opportunity to visit both of these wonderful cities (both of which are new CEA destinations!).

Amsterdam is an incredibly beautiful city that most people don't realize is built in a labyrinth-shaped pattern of extensive canals right on the North Sea. I was able to visit Amsterdam twice in total during my time studying abroad. Throughout my adventures in Amsterdam, I visited the Van Gogh Museum, experienced the wondrous parks, toured through the incredibly narrow streets, and even visited the Keukenhof Flower Gardens right outside the city (pictured above). The Keukenhof Flower Gardens encompass the world's largest flower exhibition, and it was especially breathtaking because the Netherlands, particularly Amsterdam, is known for their beautiful tulips. I would say that out of the two trips to Amsterdam going to the Keukenhof Flower Gardens was hands-down the best part and a must-see for any traveler.

Another enjoyable experience in Amsterdam was visiting the Albert Cuyp market outdoor market. This was a huge walkway full of various shop merchants and food vendors, including the place of the original StroopWafel, which is actually a traditional Dutch dessert that has become extremely popular in Amsterdam. It is made from two thin, dough-like waffles with hot caramel syrup in the middle. I recommend getting it with chocolate on the outside. The warm waffles melt in your mouth, making each bite better than the last. Another food that I recommend trying is the fried cod with homemade tartar sauce. The cod has outstanding quality and is deliciously flavored, making for a great lunch.

However, a close second to the Keukenhof Flower Gardens was eating at FoodHallen. With towering ceilings, hundreds of tables, live music, a hearty crowd, and 20+ food vendors, this offered a fun atmosphere to try gourmet food. Each vendor specialized in a few items and sold them for 7-9 euros. My friends and I ordered from different vendors and ate family-style. My favorite foods consisted of calamari fries, a burger, herring, Mexican street tacos, and poffertjes for dessert.

Budapest blew my expectations out of the water as soon as I set foot off the bus. I was expecting an old, run-down, dirty city, but I couldn't have been further from the truth. Budapest is a magnificent city by cleanliness standards. The city is extremely well-kempt, so it almost feels modern but still conveys that old city charm. The first landmark I visited was the Fisherman's Bastion Twilight, which is modeled after an old medieval castle, and at the top is Matthias Church. The architecture of Fisherman’s Bastion was astounding, and the walk up was even more breathtaking. The church at the top was beautifully crafted, but the real view was the structure and walk up to the church.

A must-experience activity when visiting Budapest is the famous bathhouses. I went to the Gellert Thermal Baths and was not disappointed because it is one of the leading natural hot spring spa baths in Budapest. The bath houses have heated indoor and outdoor pools, and they are friendly for all ages. Additionally, steam rooms and cold baths are also present at the facility. Honestly, they are a great way to spend an afternoon with some newfound friends.

The best major landmark I visited while in Budapest was the Liberty Statue on the Gellert Hill right near the bath house I visited. Erected in 1947, the statue signifies the liberation of Budapest and Hungary from the Nazi rule. It’s definitely a bit of a hike to get to the top of the hill where the statue is, but the views of the city are magnificent. Alongside the 360-degree views of the city is the Liberty Statue itself, which is an impressive feat nonetheless.

A fun fact about Budapest is that the Danube River, which is one of the largest running rivers in the world, literally cuts the city into the Buda and Pest sides. Buda is the side which is commonly known for its wealthier inhabitants and includes the Buda Castle, which is now a famous art exhibition.

Amsterdam and Budapest are two incredible cities that Europe has to offer and are the first two cities I recommend when asked where to visit first when abroad. The warm atmosphere of Amsterdam with the narrow alleyways and uncountable canals make it a cozy spot for a short weekend trip or long-term study abroad destination. And Budapest's vibrant nightlife and endless historical landmarks make it a must-see destination.

Matthew Baldini is the Fall 2018, Spring 2019 Alumni Ambassador in Prague, Czech Republic, and is currently studying at Montclair State University.
Leave a comment
Newest on top Oldest on top
Load more comments
Thank you for the comment! Your comment must be approved first