Taking the Bull By Its Horns

October 14, 2015
by CEA Content Creator
SHARE SHARE
When you hear bullfighting, it is commonly associated with Spain. You might also have seen, through social media, that it is a very controversial issue. But wait! Before making judgments, I think it is important to get as much information as you can from both sides.

Cue Fernando del Toro, a local bullfighter or torero, who first stepped in front of a bull at age 16 and then in front of a bull with the crowd watching at 17. Luckily I had the opportunity to sit down with Fernando himself to talk about his experiences and how bullfighting changed him. [Special thanks to HablaWorld for helping translate the exchange between Fernando and I!]

What made you first want to become a bullfighter?
As a kid, I had a curiosity, and I have always been involved with sports that took risks, so this felt like one of those—a challenge, if you will. Then I liked it so much that I continued. Like a game, for me, I had some experiences that changed my way of seeing the world. And then I discovered that [bullfighting] was neither a game nor a sport, but a profession that I wanted to become involved with. What makes a great bullfighter were qualities I want to possess, and what I’ve witnessed while doing this has changed my life.

Going off of that, could you expand on those changes on your life?
You see life from a very different perspective from other people because you are facing life-or-death every time you step in front of a bull. Things that aren’t as important to other people become very important to you, or vice versa. 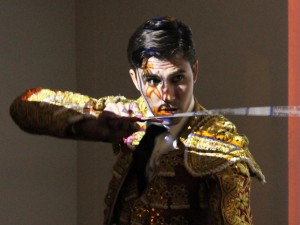 Can you explain how you practice or train for bullfighting?
I train about 6 to 8 hours a day. I would start with some running, and then do some exercises. Another important aspect of training is through certain sports that would be beneficial to you for bullfighting—for example, frontón, or handball. In the evening, I practice doing the movements of the capote [cape], which is called toreo de salón. I can just do this in my room, pretending the bull is in front of me. The mind is also very important, so I have to mentally prepare myself as well.

Describe your most memorable bullfight.
What I should say is that my best bullfight has not arrived! My perfect performance with the perfect bull is yet to come because I am still learning with each bullfight. However, if I am to choose one, in my short career, my bullfight in Málaga on August 14, 2006 was very special to me. When I first arrived to the stadium and faced the bull, I did not feel very confident, but while with the bull, there was a certain point when I could not even hear the music or crowd since I was so focused. I felt a connection with the bull, and that was a reminder of why I love bullfighting so much.

Do you have a favorite torero or inspiration?
There are many toreros, and each torero inspires me in a different way. A good bullfighter should pick up the good things in various toreros and learn something from them. My pink cape, or capote, for example, was inspired by Morante [de la Pueblo, another torero]. El Fandi inspired me with his banderillas. But I guess my hero, or point of reference, ever since I was a kid, is Finito de Córdoba.

Can you describe your thought process during the ritual stage?
It’s a lot to think about, very quickly. From the moment the bull comes out, observation is my main technique since I need to notice as much as I can about the bull’s movements and reactions to present myself as a good challenge to him. Therefore, I need to make sure I am intuitive, ready, and focused.

What is the scariest moment in your bullfighting career?
I cannot think of one specific moment but a generic moment. It’s the moment right before I go out—when I hear the trumpets, the clarinets, the timbales, the public—and then I know that I have to get in. When I know I have to face the bull now. Each bullfighter has his own moments, but this is mine. It is so intense that this is the worst part for me. 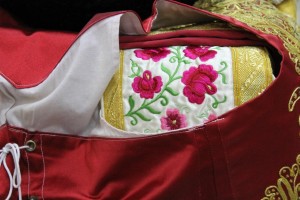 That is pretty scary… what makes you go in though?
[Laughs] Well it is what I said in the beginning. That objective of wanting to take a step forward, to survive—your instinct—, take control, and achieve this is so fulfilling. I am learning a lot about myself throughout this process and constantly having to face my fear makes this worth it.

I see. So what was your family’s reaction to you wanting to pursue bullfighting?

Well, in the beginning, because I was a kid, everyone thought I was kidding and did not take me seriously. My family and friends would laugh and joke that I would be a bullfighter. Unfortunately, my first injury happened very soon, when I was 20. That was the first time I performed in front of the public wearing my entire torero outfit. My personal life changed at that point, not only for me but for my family as well. It was then that I really understood that I was playing with my life every time I stepped out in front of a bull. My parents too saw that this was my job, but that they could also lose their son. My relationship with my family and friends changed, and they respected it more because they knew that I was not only serious but risking my life. After that, they did not laugh anymore.

What is one common misconception about bullfighting that you would like to dispel?
Well, there is an internal fight between people who are against it and not. What I always like to say is to get to know it—to not judge the profession without getting to know the bullfighter and the bull. If afterwards they’ve met the bull and the torero and still are against it, then I respect their decision.

Okay. I know your interest in bullfighting was sparked at a young age, but in your presentation, you mentioned that bullfighting might fade in one or two generations. What is being done to ensure that youths can still be interested and continue the tradition?
It’s a matter that will require more attention, since the people in charge of this are not bullfighters themselves. They are spectators, or called aficionados. Professionals should get more involved so that they can give their personal perspectives. We are concerned about bullfighting’s reputation.

That’s very interesting you say that. I was researching bullfighting on the Internet before this and noticed that there aren’t very many interviews with bullfighters. I only found one, from GQ Magazine, with Juán Padilla because he had, at the time, recently suffered a horrible accident with his head…
Yes, unfortunately, the activists against bullfighting are very, very organized than people who are willing to renew bullfighting. The only way they can support is by attending bullfights. The thing is, bullfighting events are almost always sold out. For me, I see so many people who are pro-bullfighting; of course, I am in an environment that is obviously going to support it, so maybe I need to talk to some different people. But it is true that stadiums are full of spectators, which does say something. However the people against it have such a strong social media presence, that it makes it look like way more people are against it than there actually are.

Wow, I read this figure that said 80% of Spaniards are against bullfighting. This doesn’t seem very accurate then.
I don’t believe so. After soccer, bullfighting brings in the second highest amount of money in taxes, which is equal to the amount that theater, music, and cinema put together bring in. Someone who is convinced to watch bullfighting may actually enjoy it, and someone who already enjoys bullfighting will always go. So bullfighting spectators will increase. Maybe that figure meant that there are certain parts of Spain in which 80% of the people in that region do not support bullfighting. In Barcelona, bullfighting is illegal. But in a lot of the little towns around Barcelona, they do toro embolado, which is when they attach balls of flame to the bull’s horns. This practice is even more harmful to the bull than [regular bullfighting.] 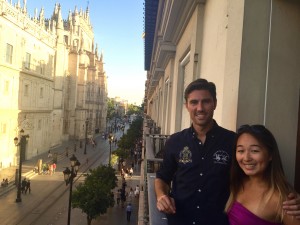 Okay, well thank you for your time and all this information. It was very helpful and can definitely shed some light on bullfighting.
Well thank you for wanting to more about it and share this! There is just so much talk around this topic, but it is always best to know both perspectives.

Overall, my [personal] final thought is that, though controversial, one should not be quick to jump to conclusions based on one article you read on it. With CEA, I attended a bullfight on Sunday, and I honestly have to admit that it was quite difficult to watch. There were exciting parts but definitely uncomfortable ones as well since I have never witnessed such a public death of an animal. The best advice I can give is to go in with an open mind and do your research beforehand!