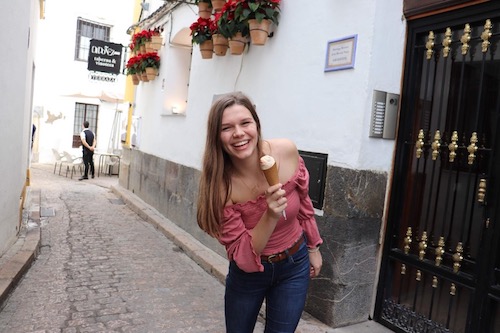 One of my absolute favorite day trips in Spain was to the beautiful city of Aracena. This city is about an hour and 15-minute drive (and an easy bus ride) from Seville. When you arrive in Aracena, you are surrounded everywhere by white homes with red Spanish rooftop tiles. In this small town, you will find that it’s hard to find anyone who speaks English, so it’s a perfect city to really practice your Spanish. The city is famous for a Castle on top of a hill named Cerro del Castillo (Castle Hill) that you can climb up the hill and tour. Once you reach the top, you get a fantastic view of the entire town of Aracena below! I highly recommend walking all the way to the top; you won’t regret it. 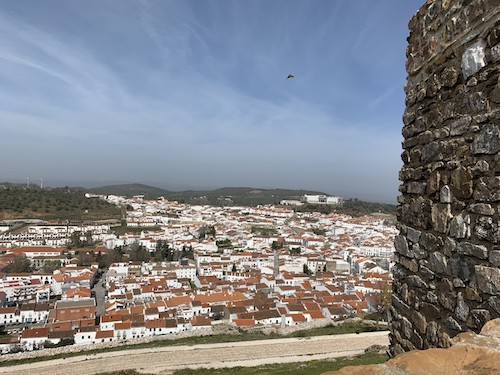 Another amazing sight to see in Aracena is the Gruta de Maravillas caves (pictured below). The caves are located directly below the hill on which the castle stands. This is one of the most spectacular sights in Spain and a great way to spend your time in Aracena. After a day of sightseeing, my friends and I went to different local tapas restaurants in the city center and ordered jamón ibérico, which is famous in Aracena. Speaking of jamón (ham), there is a museum in town dedicated solely to jamón! Having jamón ibérico and spending time in Aracena with my friends was one of my favorite memories in Spain and a perfect day trip!

Sydney Schwaller is a CEA Alumni Ambassador who studied abroad in Seville, Spain, during the Spring 2020 semester. She is currently a student at the University of Wisconsin - Milwaukee. 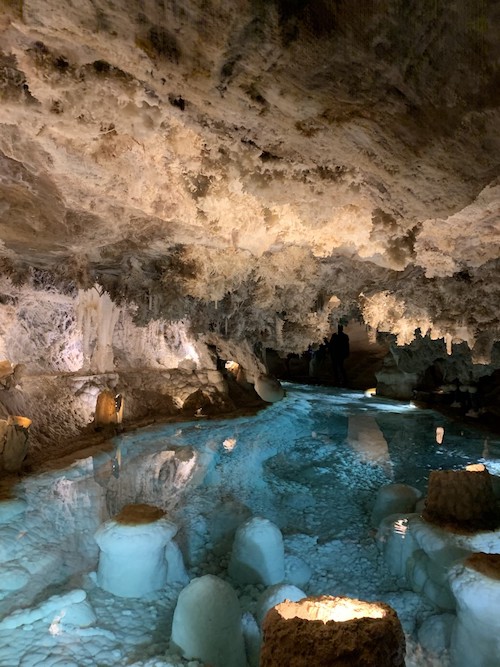 Imagine yourself in the hometown of Pablo Picasso, roaming the charming streets of Malaga. This was by far my favorite day trip while studying abroad in Granada, Spain. My friends and I spontaneously decided to buy bus tickets the night before, and it turned out to be the perfect adventure. First, we ended up hiking to the Alcazaba and the Castillo de Gibralfaro; the Alcazaba is a large Moorish fortress full of interesting history and an amazing view of the city. We also saw the ruins of the Roman Theatre. By this time, we were already exhausted and decided to eat delicious bocadillos at a local restaurant for lunch. In the afternoon, we spent over an hour at the Picasso Museum and were able to learn about his life and the many interesting and famous art pieces he created. After taking in so much excitement and history that day, we tanned on the beach and watched the happenings of the city unfold in front of us. There are many other sights to see that we didn’t have time for, including the Malaga Cathedral. However, it was an unforgettable experience, and I am so thankful that studying abroad allows for so much spontaneity. There are also many other opportunities to travel locally while in Granada, whether you walk up to the Mirador San Nicolas, take a bus to the beach in Nerja, or take a hike in the beautiful Alpujarras. There is always an adventure, near or far, waiting for you in Andalusia, Spain.

Ashley Cialone is a CEA Alumni Ambassador who studied abroad in Granada, Spain, during the Summer 2019 term. She is currently a student at Colorado State University.

Girona is a beautiful city with a rich history located just over an hour away from Barcelona by car, bus, or train. There are many attractions that make the trip well worthwhile for a day trip, but there is definitely enough to do in the historic city to fill a weekend, or a couple of days. One of the most noticeable landmarks in the city is the Catedral de Girona. This cathedral is located atop a long staircase and is visible from just about everywhere in the city. It features beautiful Romanesque and Gothic architecture, like many of the historic cathedrals located in and around Barcelona. Additionally, Catedral de Girona, along with various other sites in Girona, has been featured in the popular TV show, Game of Thrones. 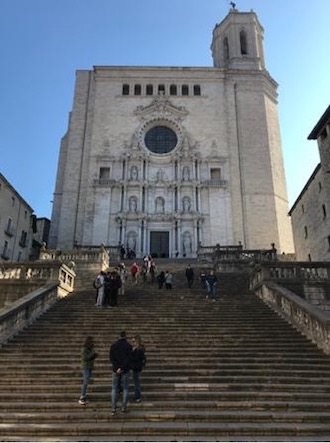 Another eye-catching feat of architecture that can be found within Girona is the Eiffel Bridge. This pedestrian bridge spans one of the few rivers that run through the city of Girona, offering a great view of parts of the skyline, including the cathedral, and awesome reflections of the colorful buildings on the water’s edge. 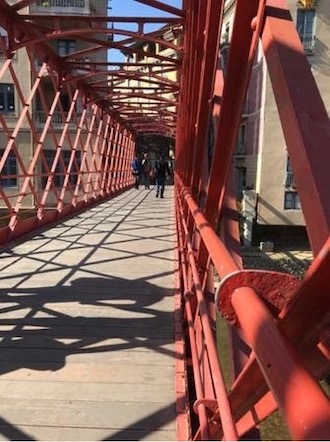 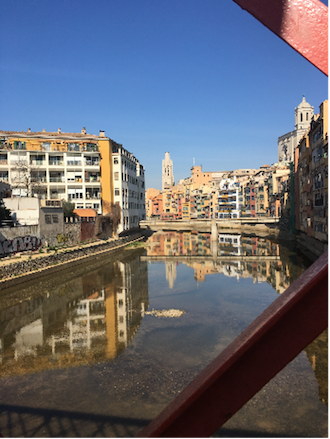 As if that wasn’t enough, the Muralles de Girona, or walls of Girona, is a medieval wall which runs throughout the city. Atop the wall, there are roughly 2 miles (3 kilometers) of walkway offering spectacular views of both the city itself and the surrounding countryside. One of the things I found most interesting about the city was the abundance of Catalonian pride. Yellow ribbons and Catalonian flags line the streets of Girona just about everywhere you turn. A day trip to Girona, an extremely pleasant, charming city north of Barcelona, is an adventure worth embarking on! 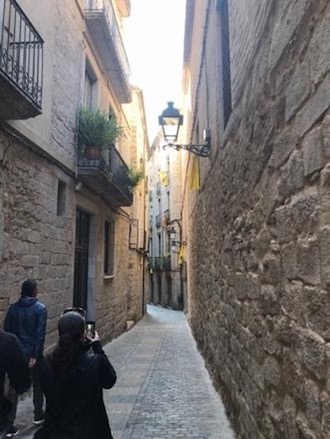 Scott Budkofsky is a CEA Alumni Ambassador who studied abroad in Barcelona, Spain, during the Spring 2020 semester. He is currently a student at Indiana University - Bloomington.

Upon completion of the three-week Spanish intensive course I took at the Centro de Lenguas Modernas in Granada, Spain, CEA took my classmates and me on a trip to Córdoba in late January. I remember traveling in the morning by bus from Granada, which took around three hours. Córdoba was a quaint, beautiful city. When we arrived in Córdoba, Spain, we crossed a long beautiful bridge which led us to our first stop, the Mosque of Córdoba. We were given the choice to follow along the tour in English or Spanish. I followed along in Spanish with a little earpiece and learned about the architecture of the beautiful mosque that was later converted into a Christian cathedral. The church has features of a Catholic church as well as a mosque, and the design is so impressive. 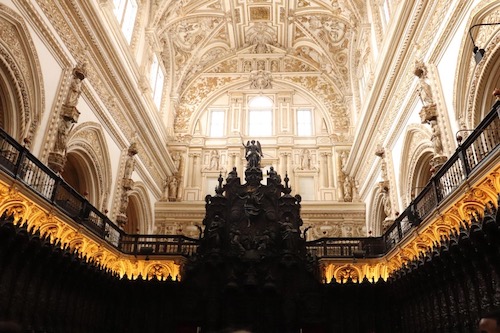 After our tour of the Mezquita, we walked down a famous street in Córdoba called Calle de las Flores. The street is narrow and full of potholders with blooming flowers. After the trip down Calle de las Flores, we were given a couple hours of free time, whether we wanted to eat lunch, explore more of the city, or just bask in the sun.

My friends and I ate the lunches our host mother’s packed for us, bought some gelato, and decided to explore more of Córdoba. We found neat little streets with vivid paint and a little plaza with more flowers. I will always remember this as one of my favorite days in Spain. I loved learning more about the history of Spain and getting to explore Spanish cities on my own.

Mackenzie Brady is a CEA Alumni Ambassador woh studied abroad in Granada, Spain, during the Spring 2020 semester. She is currently a student at Illinois State University.