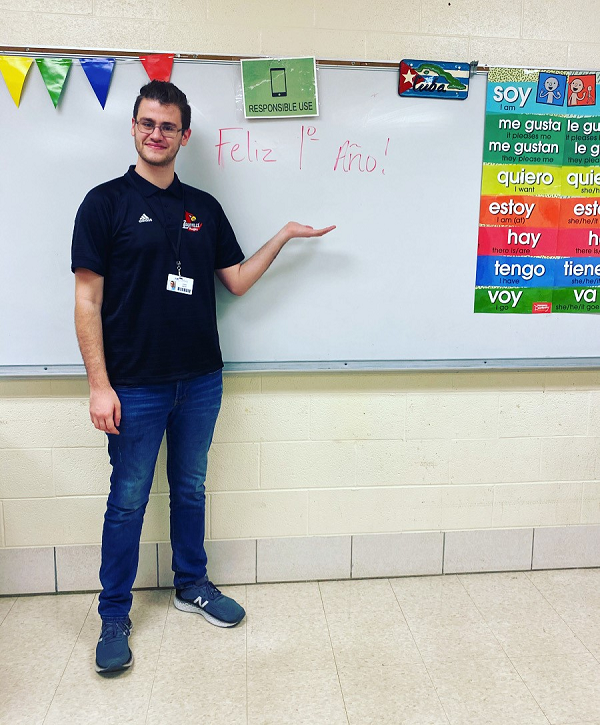 I don’t know if I could ever be a successful teacher if I hadn’t studied abroad in Buenos Aires, Argentina, through CEA. As a first-year Spanish teacher, I share many stories about the fantastic memories that were made in Buenos Aires. I talk about the empanadas, dancing the tango, and seeing Iguazú Falls, one of the most spectacular sights of my life.

I’ve always known that I wanted to be a teacher, and it was a decision that I made in the seventh grade. I’ve always considered myself blessed to have known what I was destined to be--now that I’m a high school teacher, I see the worry in my students’ faces when trying to decide what to major in college. Since the seventh grade, every step I’ve made academically since then have been ones to help make me a successful teacher.

At first, I wanted to teach English. I always knew that I loved languages and words. Grammar has always been interesting to study, and as a teacher, it is one of my favorite subjects to teach. During my freshman year of high school, I took year one of French. I absolutely loved learning a foreign language--there were new grammar rules to learn, new stories to be told, and new cultures to learn. Later on in high school, I decided to take Spanish, and I loved the language even more.

I was blessed to have a fantastic Spanish teacher in high school who helped encourage my love for foreign languages. Not only did she have a love and respect for the Spanish language and culture, but she was an exceptional teacher who encouraged me to be a better person, overall. During my senior year of high school, I decided to take dual-credit classes at the local university in Spanish. My Spanish professor for that class was an Argentine woman who made me begin considering studying abroad in Argentina.

After high school, I went to Berea College in Berea, Kentucky. Berea College has been an amazing college to which I owe so much gratitude. As a student who grew up financially poor, I was able to to benefit from Berea College’s Zero Tuition Promise, meaning that they don’t charge tuition to anyone who is accepted to the college. The course load is also academically rigorous, so as a Spanish major, I was able to learn much about the Spanish language and culture. As a language major at Berea College, it is expected that students study abroad during the final semesters of the college experience.

Through quick Google searches I found CEA’s Buenos Aires program, and I immediately fell in love with the program--it offered so many excursions, so much support, and a multitude of experiences to feel like a porteño. In a matter of days, I applied to the program. I soon heard back from the CEA team with an acceptance call, but also with the fortunate news that I had been awarded CEA scholarships to help lower the cost of the trip. Within the next year, there were many meetings, calls, and emails sent between CEA and me to help prepare me for my study abroad, and after each message sent and received, I became more and more excited.

Soon, January came, and I was ready to fly to Argentina. As soon as I arrived in Buenos Aires, I was picked up by a CEA member and taken to my home-stay. For the next seven months, I learned so many Spanish skills that did more for me than my Spanish major ever did. I learned all the cool lunfardo, talked to the very warm and welcoming people, and made so many Argentine friends that I miss so much every day. I was able to travel to many countries and experience so many different cultures and places. I got to experience Carnaval in Río de Janeiro, Brazil, tour the wineries in Mendoza, Argentina, visit the beautiful Iguazú Falls, and visit the beautiful country of Uruguay.

All along the way, no matter where I went, I picked up an insane amount of vocabulary and grammar skills that have helped me successfully teach Spanish skills in my classroom. Whether it was during my home-stay, at the university, or on the streets, I was always speaking Spanish and learning new things every day. Without a doubt, studying in Buenos Aires has well-prepared me to be a great teacher.


Chase McCoy is a CEA alumnus who studied abroad in Buenos Aires, Argentina, during the Spring 2019 semester. He is a graduate of Berea College.