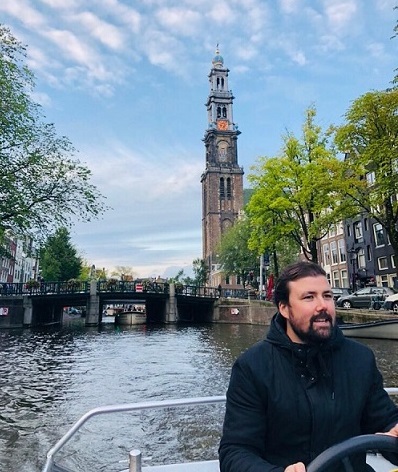 We caught up with Frans van den Bliek, the CEA Program Director in Amsterdam, Netherlands, as he shares what makes the city so ideal for study abroad students. Learn more about Frans and the lifelong benefits of an Amsterdam study abroad experience in our Q&A below!

What’s your favorite part about living in / growing up in Amsterdam?

As I grew up in very small town in the south of the Netherlands, Amsterdam could be considered as the biggest opposite place to live within the Netherlands. After completing my bachelor's degree in Tilburg, I decided to apply to the Vrije Universiteit (VU) Marketing master's program in Amsterdam. Unfortunately, due to different academic policies, I was not allowed to start and I continued and completed my first master's in Tilburg. Luckily, I only found out that I was not allowed to start after VU's wonderful orientation and spending / living my first week in Amsterdam. I immediately felt a sense of belonging, and I knew at that moment that I would return to Amsterdam. After finishing my master's in Tilburg, I moved to Amsterdam. The reason why I moved is my favorite part about living in Amsterdam: there is always something new to explore. New venues, restaurants, bars, exhibits and music events pop up on a daily basis and provide you with the feeling that you are alive.

Why is it a great place to study abroad?

When people think about Amsterdam, they come up with various thoughts and ideas about the city and its "liberal" way of life. Therefore, people often mistake Amsterdam for a big, crowded, and maybe even unsafe place. As I have traveled a lot, I can honestly say that Amsterdam is pretty much a big village (no high buildings in the city center), with an atmosphere akin to walking around in a museum, with its canals and beautiful buildings. Besides the fact that it's small enough to discover while studying abroad for a semester, it's very diverse, open to everybody and it offers so many (music) events and other entertainment, that there is no need to travel anywhere else during your stay. But if you decide to explore more cities / countries within Europe, Amsterdam Airport (Schiphol) is only a 20-minute train ride away and offers cheap flights around Europe (and the world). Last, but certainly not least, Vrije Universiteit (VU) is a great academic partner. VU offers a very diverse student group and any student will feel welcomed at VU by their friendly staff and classroom environment. 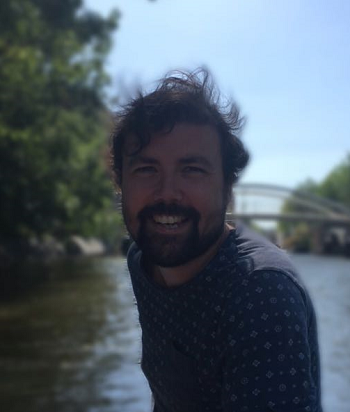 Tell us a bit about your background and your role with CEA in Amsterdam.

While studying (bachelor's and my first master's), I was already working part-time for a direct marketing agency (up to 32 hours a week) next to my studies. Therefore, I never considered studying a semester abroad myself (how foolish could I be?). The travel bug was planted a couple of years later; during a quick holiday to Thailand,  I decided to quit my job and to travel South-East Asia on my own pace. When I returned to Amsterdam, and decided to work in a true International Environment, I was introduced to the director of the only American university in the Netherlands (Webster University). I started working (and studying) at Webster, and started my new career in education. After a couple of years at Webster, I joined another great company in the educational sector, Education First (EF), where I was the Country Product Manager for Dutch students and professionals who wanted to learn a language abroad. By joining CEA in July 2019, I am on the ground working with the students, which I enjoy very much!

What are you most looking forward to having CEA students experience in Amsterdam?

The personal growth of the students! I have seen it happening with the first group of students studying with CEA in Amsterdam. I really saw their personal development within a couple of months. They are in a new environment, and new country / city, with new people who become new best friends, which has a great influence on the way they see and experience the world. 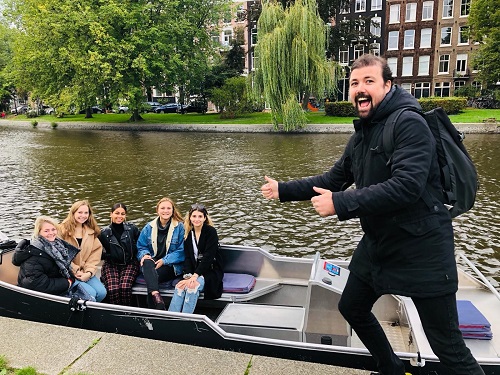 That most of the canals show the fact that you are below sea level! It's called NAP (Normaal Amsterdams Peil). Without all the dikes, a big part of the Netherlands (including Amsterdam) would be the next Atlantis.

What is an important part of the history/culture that you find students aren’t aware of before they arrive in Amsterdam?

Most students are very aware of the Dutch WWII history by Anne Frank's book. Some even know the Dutch-U.S. link, and that New York actually was named New Amsterdam before it was rebranded by the English. What most of the students do not know, is the former (colonial) link that the Netherlands has with Indonesia and Suriname. Therefore, you can find a lot of warung's and toko's (Indonesian and Suriname Restaurants) in Amsterdam.

What might appear to be the most challenging aspect of life in Amsterdam for students to adjust to, and how do they overcome the difficulty?

Getting around on a bike! In Amsterdam, we tend to cycle everywhere. We don't drive or use public transport. for that matter. No, we cycle. In order to overcome this hurdle with students, I start with some biking lessons and spreading the general traffic rules in the Netherlands for cyclists. The group of Fall students thought at first they would never make it to the VU on their bikes (a short trip, just over 4 miles), but after a while, they found cycling around Amsterdam one of the best experiences they could have. One of the students even mentioned that she was thinking about shipping the bike back home because she would miss it!

Anything else you’d like to add about CEA’s new Amsterdam programs or the student experience there?

Not only does Amsterdam have a lot to offer; as the Netherlands is just a little big bigger than the state of Maryland (!), and we have great public transport -- it's really easy to see more of the Netherlands during your semester abroad. Students can always ask me for travel advice (within the Netherlands and abroad) and I will provide them with a weekly update of the most important things to do in Amsterdam, so they can make the most out of their semester abroad.

I hope to see you soon in Amsterdam!

Frans van den Bliek is the Program Director - Amsterdam.
Leave a comment
Newest on top Oldest on top
Load more comments
Thank you for the comment! Your comment must be approved first