Public Transit as a Passport 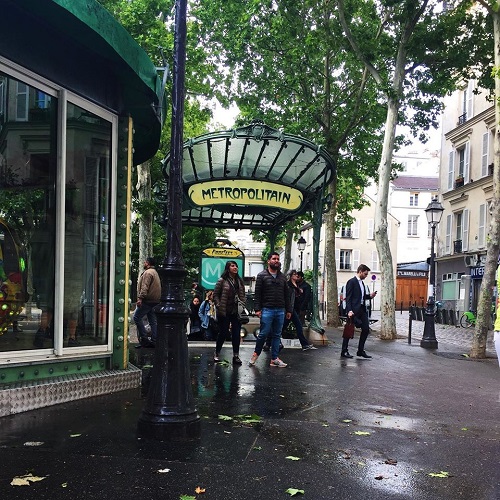 At the beginning of my study abroad experience, one of the things I was most worried about was how I would make my time abroad count. Since I would only be studying abroad in Paris for a month, I wouldn’t really have time to go explore other countries. Instead, I endeavored to try and get to know the city I’d be living in as well as I possibly could within the time frame that was provided. I wanted to go outside the neighborhoods I’d be studying and living in and try to see many different sides of what Paris had to offer.

My number one tool in this mission was public transportation. We didn’t live in the same arrondissement as the CEA Center, so our teachers required us to buy weekly Métro passes. Unlike some of my classmates, I chose to take the Métro to class every day instead of walking. I’ve always been very interested in public transportation — and I wanted to get my money’s worth out of that pass I was paying for!

Thanks to my daily travel on the Métro, I also felt confident enough using it to explore around the city, which was a great deal more efficient than walking. Our cards didn’t only work on the Métro itself, but also on buses and other forms of public transit, such as the funicular that travels up Montmartre to Sacre-Cœur. On my own, there was scarcely a day that I didn’t utilize my Métro pass. Though our trips with CEA were engaging and covered a wide range of Paris’s most famous and important sights (and did utilize the Métro and the RER, Paris’s commuter rail), there were plenty of other places I wanted to see, such as Sainte-Chapelle and the Catacombs. Thanks to the student ID that CEA provided, those places were financially accessible to me as well.

Another important facet of the Métro was that it made it easier to travel alone. Making friends is an important part of studying abroad, and I’m so glad I met the people who I got to know thanks to my program, but that didn’t mean they always wanted to do everything I wanted to, especially when it meant leaving the house when it was pouring rain outside! By using the Métro instead of walking, I knew that I had both a way to get home quickly if I got lost, and attendants who would be able to help me as well. This gave me the confidence to try exploring even though the possibility of not knowing where I was scared me — and I actually did much better than I had expected.

I grew up using public transit heavily, so it might have been an easier transition for me to use the Métro than most. However, even if you’ve never tried it before, going abroad is a great place to take advantage of the world of public transportation if it’s available to you. Your feet will thank you, and you’ll also learn more about the place you’ll be living for the moment: the geographic relationships between areas, the public etiquette, and it’s a great place to people-watch as well. Most of all, it helps with that self-reliance thing that people always mention when studying abroad. The worst that will happen is that you’ll get lost, and that’s more or less a rite of passage — at least then, you’ll learn to find your way home.