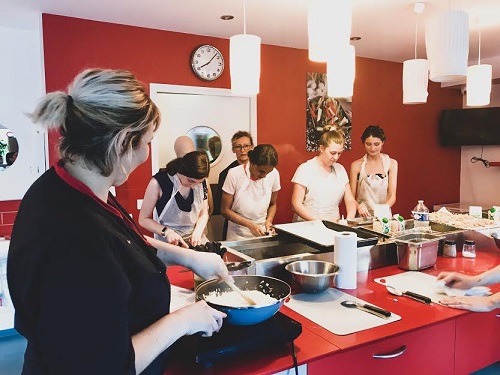 All things culinary - aka my favorite thing in my favorite place. I was recently able to attend one of the ateliers set up by CEA, a cooking class at Cook-N-Go. As someone who enjoys anything to do with tasting, making, and learning new things about food, I knew this activity was right up my alley.

Upon arrival to Cook-N-Go, the students and I were kindly asked to hang our belongings up against the wall to start preparing for the fun. We started the course by making sure everyone had washed their hands and put on an apron. The students and I were split into four groups, each helping to make individual recipes. The four recipes included were filets de poulet panés, les chaussons au jambon, crumble aux légumes du soleil, and for dessert a mini tarte aux pommes. 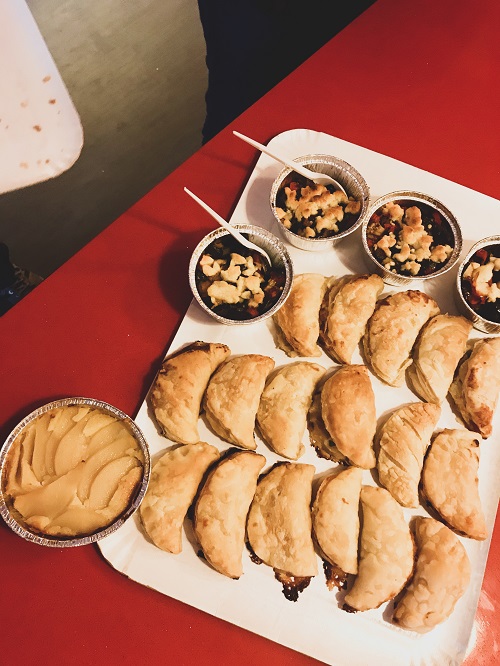 A student and I were put in the group that made the filets de poulet panés, which is breaded chicken on a stick that you later dip in mayonnaise. The chicken was pre-marinated in a sauce; our job was to cut it into small cubes, coat in breading which is seasoned in herbs de Provence, and lastly put it on a stick. It was honestly easy and did not take much effort at all. The staff put the chicken in the oven and let it cook. Across the kitchen counter, another group was working on les chaussons au jambon, an empanada-like puff pastry filled with cream and ham. I watched the students chop and sautée onion, garlic, herbs, and ham, and then they added the cream and cheese. A teaspoon of this mixture was then added to the puff pastry, sealed, and put in the oven to bake.

Although I was not at the other kitchen counter to watch the two other recipes being made, students explained that for the crumble aux légumes du soleil they cut up red bell pepper, eggplant, squash and mushrooms tossed in olive oil and herbs and topped with a flour, butter, and cheese mixture to  make the crumble. Lastly, for dessert, the tarte aux pommes (like an apple pie) was a simple recipe that included apples, sugar, butter, eggs, vanilla, and the breaded crust that was baked until golden. 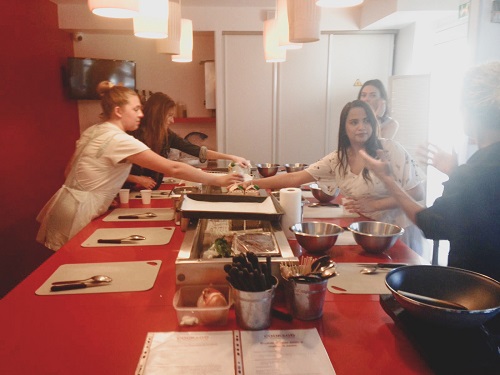 After everything was cleaned up, it was time for the best part: actually eating the food we made. Everyone gathered and sat at one of the kitchen counters to eat family-style and as the dishes came out, each group talked about what they made and how they made it. It was a great time to mingle and bond over something I a'm passionate about. Some students talked about how they also enjoy cooking and others didn’t remember the last time they made a meal from scratch—so this was quite exciting for them.

These ateliers are great for students to see and try new things. These activities are generally catered to smaller groups, which makes it nice for students of different programs to get to know each other. Throughout the course of the summer and regular academic year, CEA Paris offers many ateliers such as Cook-N-Go, a night out at the Opera, cheese and wine tastings, and many more. These activities definitely add to the wonderful Parisian experience when you’re abroad.