Leaping into the Unknown: Reflections from a Solo Female Traveler 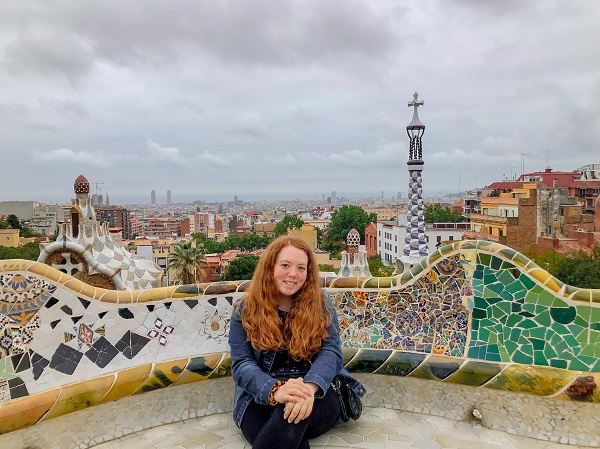 (Traveling alone? Don't be shy to ask a fellow solo traveler to take a pic of you, so that you can return the favor! Here I am at Park Güell in Barcelona, overlooking the beauty of the city.)

If you’re reading this, it is likely that you are either interested in or on your way to a solo travel trip as a woman. Chances are you have received concerned looks from your loved ones, or just advised over and over again to “be safe!” Now, while safety is of course important, this constant reminder from people to protect yourself can definitely become emotionally draining after awhile, and possibly even discourage you from venturing on this solo journey entirely.

This is where I come in with this hopefully helpful article, where I will provide you with some advice gathered from my own personal experiences as a female solo traveler myself. I used to allow anxious thoughts to fill my own mind, but I’ve since found a way to replace these with personal affirmations about my solo time. I want to remind you that you shouldn’t have to feel limited in what you can and see and do during your time abroad merely because of your gender. People may tell you horror stories about being by yourself in unknown places, but the truth is when you feel confident and remind yourself “I can do this!” you will be safe and have fun! Why yes, you should buy those flight tickets even if someone else can’t go with you, no matter the situation at hand (schedule conflicts, lack of time or funds, or simply a disinterest in going to wherever your heart desires to lead you).

You, my friend, are in control of what you do with your time abroad, and I really want you to know that being alone isn’t as scary as it seems. It’s actually pretty relaxing and eye-opening, and you’ll probably make some new friends along the way (like I did!). You don’t know when you will get this time again, and no matter your reasoning for wishing to go now, please don’t let other people turn you from the paths that you feel as though you are meant to travel.

1. Don’t think too much about the what-ifs.

I almost made the mistake of not going out of fear of what could happen to me. Instead of focusing on the fact that I would be seeing three beautiful countries, where others may only dream to go, I worried too much about the mainly irrational events that could occur. Thankfully, I realized before my trips that the key to solo traveling is believing in yourself. I took the leap and suddenly found myself alone and loving my life in not one or two, but three popular tourist destinations: London (England), Krakow (Poland) and Barcelona (Spain). I almost made the mistake of not going to these places, where I really wanted to go, as a result of my anxiety sweeping over my sense of rationality, and trying to bury it until the opportunities passed me by. While abroad, you may not be familiar with your surroundings, but you do know that you are an intelligent woman who has found her way to this day, to the moment of your reading this, so why would this trip be extremely different? (You also have Maps on your phone, which I highly recommend using, as well as investing in international data to feel more secure.) Just take it one step at a time: from your arrival to the airport, your journey to the hostel (which really aren’t as scary as you may think! I would advise just bringing a lock and key with you, so that you don’t have to worry about your stuff all day) and the rest of your time in the city of your choice.

2. Don’t think too far into the future.

Much like my first tip, I would recommend not planning out all your days in entirety. When I was in Krakow and Barcelona, I only had two days to explore the cities. Now, I don’t regret anything that I did there, but I did put high expectations on myself to see everything notable in the area; however, I realized that experiences in the city are usually better than going to popular tourist destinations themselves. I did a couple free walking tours in the places where I went (which, by the way, are technically free, but I would bring some of the local currency to tip at the end!) and booked in advance the trips that I would take to places like the Memorial and Museum of Auschwitz-Birkenau and Basilica de la Sagrada Familia, since guided tours and tickets will most likely be sold out even up to a week before your trip. But I would advise saving some free time during your day, and only plan on visiting a couple destinations each day. Trust me, you will want to save time to just wander the cities and immerse yourself in the local cuisine and culture. This will also give you those moments when you get to just think: wow, I’m actually here, I’m alive and I’m having a great time even by myself.

3. Thank people for their consideration of you, but don’t let it stop you.

Your friends and family members are going to worry about you; that’s expected. But you don’t need to let their concerns keep you from chasing your dreams. When I told my mom I would be going to two countries, where English is not the first language, alone, she took a deep breath and told me to tell her that I was joking. But I wasn’t, and I neither wanted to apologize for this decision of mine, nor cancel my trip and watch that scheduled time pass me by. If you come across issues like this, it’s helpful to explain to people that you are a capable adult, and also to possibly provide them with some of your itinerary and accommodation details. These worries derive from a place of love, but don’t let these kind of expressions intimidate you. If anything, use it as fuel for when you are on your trip to remind yourself that you can do this. However, while we’re on the subject of the people who surround you, I would say not to be entirely kind and welcoming towards the strangers that you may meet abroad, since you really do not know people’s true intentions. It’s okay to talk with them and introduce yourself, but remember that your safety and well-being are ultimately more important than letting your guard down completely.

You are a smart, capable and independent woman, who doesn’t need anyone else besides yourself to see the world! So go watch the Changing of the Guards at Buckingham Palace and feel like royalty in London, because you are the queen of your own destiny. Feel free to book a trip to Barcelona to see la Sagrada Familia, because you deserve to take in sights as beautiful as this experience that’s all your own. Most importantly, solo travel because it’s what you want to do, and because of all the feelings of accomplishment and happiness that will come from your doing so. You’ve got this! (And just think about all the cool stories you’ll have to share after your trips!)

Love and Best of Luck,