A Lesson Not so Black & White 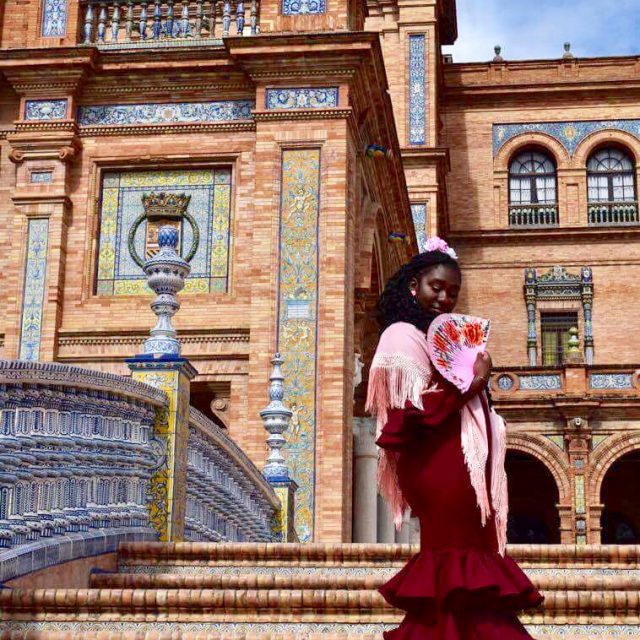 This time last year I was beginning a five month adventure where I lived in Seville, Spain and I took on the world by traveling to surrounding cities and countries. The cities and cultures that I experienced taught me a lot about culture and behavior, but as it turns out, I also taught a lesson or two of my own. A lesson about what it means to be Black. Even though I was with hundreds of other Americans who were abroad in Seville, my “minority” status still stuck with me. To tell you the truth, the number of African American students studying abroad just isn’t very high, especially not in Seville. That means on top of being an American in another country, I stood out even more.

In my five months in Spain it was clear that many Sevillanos have had very few interactions with black people and just really did not know how to handle it. People would stare at me on the streets, some even going so far as to stop me and ask to touch my hair.  I was called “Morena” and “la morenita” which means dark or black skinned girl. On one less than pleasant occasion, I had a much older man touch my skin as a way of saying that I was beautiful. Compliment or not…..that’s just gross. Another time, a younger Spanish guy impressively rapped to me when he asked me if I liked rap music. Even my host mom was joking around one day asked me to teach her how to twerk because she assumed I knew how it was done. My roommates and I teased her about the whole thing and even invited her to come out with us but when I look back I can’t help but wonder why she asked me and not anybody else. In America, these kinds of things would never fly.

It is important to I mention that I didn’t ever feel threatened or insulted because I knew the interactions weren’t coming from a place of hate. It was curiosity and intrigue that drove their actions. When I looked at it that way it made me see things a little bit differently. For some Spaniards all they have as representation of Black people is pop culture: Music, TV, and Movies. All too often pop culture presents a unilateral view of a race or culture to draw in viewers. So of course the foreign consumers would have skewed perspectives. That’s when I realized that the response I would normally have if someone touched my hair or rapped to me, or asked me to twerk cannot be the same as it would be in America. The people just aren’t the same. Rather than accepting the fact that I looked different and would probably be treated differently, I actually looked at my time abroad as a challenge to educate the people of Spain that I encountered.  For me, being black abroad was a teaching opportunity. A chance to shift the “Black narrative” from the stereotypes portrayed in movies and TV shows and guide it to something much more real.


My first lesson: I may be different in skin tone but we’re more alike than you think. Despacito wasn’t the summer hit of 2017 for nothing. Everyone can appreciate good music! I’d like to point out that I was a fan of the song before Justin Bieber came out with his remix and I definitely prefer the suave intro Luis Fonsi serenades me with in the original. Nevertheless, when it came down to the music, there was no Black vs. Spanish war, we all enjoyed all types of music together. Even when we didn’t know the language.

Another lesson I taught was about my hair. When I was abroad, I felt like my hair got more attention than I did sometimes. My go-to style since basically the fourth grade has been individual box braids with curly or wavy ends. When it was time to get my braids redone I knew I was going to have to find someone to do them and I was definitely prepared to take the six hour bus ride to Madrid, if needed. Fortunately, someone helped me find a local who was capable. When I came back to my program the next day looking different a lot of people loved my new look, but also had a lot of questions which meant that I had to be open about what my natural hair looks like and the process to get it styled the way it is. The questions were a lot more candid than I’m used to but to help them learn, I had to be willing to teach.


The main lesson I tried to teach was that African-Americans are not all the same. Some like rap, some can twerk, some have long dark braids. But some like K-pop, some can’t dance to save their lives, and some have big beautiful afros. There are no categories that we can all fit into. So when it comes down to answering the question “What’s it like to be Black? ” My answer could be totally different than some other Black person and since I am more than just my skin, I’d really rather you ask, “What’s it like to be Christina?”

Christina B. is a CEA Alumni Ambassador. She studied abroad in Seville in the Spring of 2017 and is currently a senior at the Christopher Newport University.