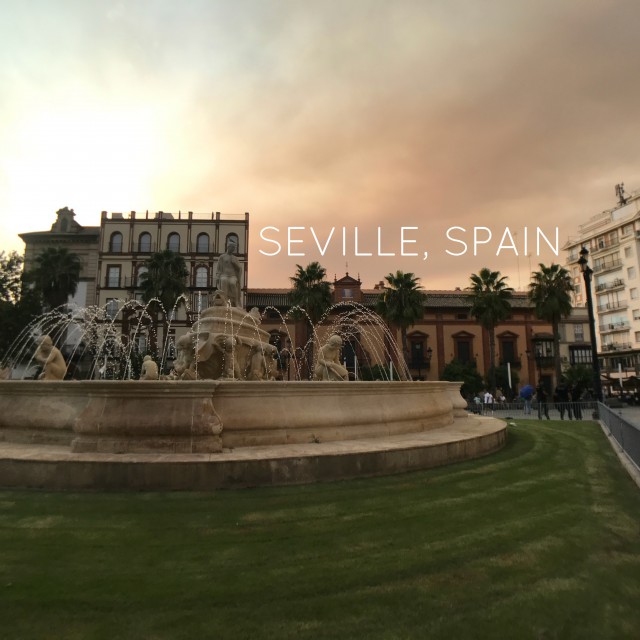 Upon my arrival in Seville,  I was overwhelmed with jubilance and curiosity. I had just spent three days in London with my cousin, two days exploring Madrid with two girls from my University, and was still reeling from the adrenaline rush. In the taxi on the the way to my homestay, I probably looked crazed with my nose pushed to the window, eyes wide with excitement. Great first impression on my new home.

I would be remiss to ignore that fact that I, along with everyone in the beginning phases of their study abroad journey, are going through a honeymoon period. The first few weeks of a study abroad in a new city can feel like you've stepped into heaven - there are new sights, smells, sounds, people, and seemingly endless possibilities. While that is definitely where I'm at right now, that's not to say that I haven't had some worries and difficulties adjusting to a new culture.

Upon arriving, I was greeted excitedly my host mom, Rocio, with kisses on the cheek and she grabbed my hand and showed me around my new home, the 9th floor of a three bedroom apartment located in Los Remedios. It was then, I became quickly aware that Rocio speaks no English and that my Spanish speaking abilities had dwindled throughout the summer. Those worries quickly disappeared when Rocio treated me to a delicious home-cooked meal and sat with me, making sure to speak clearly and at a speed I could understand - she's a veteran host mom. My roommate, Jenna and I have our own separate rooms and I'm grateful that we get along SO well. It's very relieving to have someone who can relate to some of the stresses and difficulties in adjusting to a new culture.


It's been so nice to have home cooked meals every day, not only because all of Rocio's cooking is delicious, but also as a budget-friendly option. That essentially just means more money for gelato and cafe con leche. On the subject of Spanish cooking, forget everything you know about eating schedules because here in Spain there exists a completely different concept of time. Desayuno (breakfast) for Spaniards is small and generally between 9 a.m. - 2 p.m. Almuerzo (lunch) is the biggest meal of the day and is typically eaten around 3pm. If Spaniards become hungry between lunch and dinner, they typically go to a tapas bar for something light. La cena (dinner) isn't eaten until about 9 p.m. and sometimes even later if you are going out to eat with friends. Spaniards stay up late, get up early and take breaks during the hottest parts of the day (it gets very, very hot here in Seville during the day) called "siestas" between 3 p.m. and 5 p.m. It's not better or worse, simply different!

Though my initial transition into life as a "Sevillano" has consisted of getting lost, sweating profusely during the day, becoming easily dehydrated, language barriers, lots and lots of walking, napping, and staying up late...believe or not, I'm having the time of life.

Amanda P. is the Fall 2017 MOJO Blogger in Seville, Spain. She is currently a Senior studying Global Studies & Communications at University of Wisconsin – Milwaukee.
Read more about our CEA Content Creators.
Leave a comment
Newest on top Oldest on top
Load more comments
Thank you for the comment! Your comment must be approved first