July 25, 2017
by Alvaro Sánchez
SHARE SHARE
Our walk began at Plaza Paseíto Ramiro in front of Postiguet Beach. This square, constructed in XIX century, has a few specimen trees being Ficus Nitida the rarest with 80 years old and 43 feet.

Then we walked by Paseo de la Explanada, probably the most characteristic place in Alicante and constructed in the very beginning of the twentieth century, arriving to Paseo de Canalejas which has some Ficus trees so tall that they cover the sunlight.

Once passed Canalejas we headed to Luceros Square passing by Plaza Calvo Sotelo, this Calvo Sotelo Square took his name from the second President in Spanish Democracy. 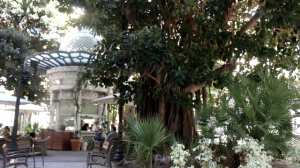 From Luceros square we went to Portal de Elche, constructed with the rest of the old wall ‘El Vell’ in 1858 and we found there four specimen of Ficus Macrophylla which are 120 years old and between 42 and 62 feet.

A few steps next to Portal de Elche we passed by Plaza Gabriel Miró, who was a Spanish writer born in Alicante 140 years ago, until we arrived to Plaza Doctor Balmis, who was a Spanish physician who headed an 1804 expedition to Spanish America to vaccinate the populations against smallpox.

After 90 minutes walking around Alicante Centre, our visit finished at Ruperto Chapí Square where is placed the Main Theatre built in 1846 with a neoclassical style.