Don't Let It Rain On Your Parade: Dingle, Co. Kerry

You’re in a seaside town on Ireland’s southwest coast come midnight, shopping the sounds drifting out a row of pubs when a sudden ruckus busts out of nowhere: a cavalcade of drums and pennywhistles, ecstatic boys hoisting a substantial trophy, and a mass of townspeople following hot on their heels, swathing the night air with flags of red and white. Random bystander and stranger to Co. Kerry, what do you do in this situation? Leap into the parade of course and follow them all the way to the high school of the victors where you’ll chuckle and nod knowingly to the speech delivered by the Gaelic football coach, more than likely incomprehensible to you, in Irish. Such is one night’s adventures in Co. Kerry’s poster-child, the town of Dingle.

From Dingle to the ghost-towns of the Blasket Islands to a Skywalker-haunted Skellig Michael, Kerry seems to be a world of its own, if not—please don’t shrink at this word, ladies and gentlemen—a genuinely magical one.

My first trip to Kerry with the NUIGalway’s Mountaineering Club, while thoroughly sodden over the weekend (our hostel’s ‘drying room’ became a proper aquarium after we deposited our hiking gear), gave us the chance to trek around one of Ireland’s highest mountain ranges and Kerry’s countryside. Unfortunately, a squall routed our hike up Mount Brandon, Ireland’s second highest peak, but if you’re able to, I’d definitely suggest the area for any avid hiker.  The same goes for Dún Chaoin Hostel and its stunning view of the Blasket Islands—but, millennial be warned: Wifi may or may not be in rare form here. 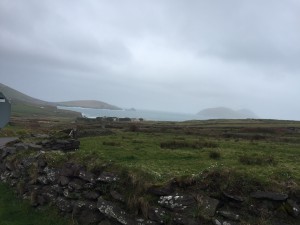 Speaking of which, what actually are the Blasket Islands? As we learned on our CEA excursion to Kerry, this ring of abandoned islands once boasted of a rich literary history (particularly from natives’ autobiographies) and the most ‘undiluted’ form of Gaeilge in all of Ireland. However, due to its the inaccessibility to the mainland, the government evacuated all 30 remaining inhabitants in 1953. 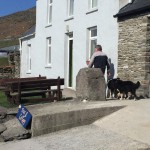 CEA’s stop at the Blasket Centre café for lunch gave us a moment to catch a breath before continuing on our roadtrip to the Gallarus Oratory, several Caribbean-blue beaches and the remains of a medieval farmhouse near a working sheep-farm---a sheep farm advertising “Hold a baby lamb!” to the roadside with a cardboard sign. Which, of course, we did.

At first, Dingle town appears deceivingly sleepy with its picturesque sea-side shops and pubs, but its claim to numerous festivals, gigs, and an influx of tourists sings a different tune.  Our group caught a glimpse of Fungi (a dolphin who followed a fisherman into the harbour in 1983 and hasn’t left since) and savored the surprisingly astounding taste of Blackcurrant and Brown bread ice cream at award-winning Murphy’s Ice Cream.


Friday and Saturday evening, we split and went out on the town---and being the Trad-head I am, I zeroed in on the many music venues. O’Sullivan’s Courthouse’s screen-free pub featured an infervored concertina-guitar duo. They weaved innovative riffs into reels and polkas as the night wheeled on, old friends more accustomed to each other’s style than a hand to a glove. Which is a delight to watch. As is Niamh Varian-Berry, a traveling voice with Irish-American super-group Solas (a personal favorite), whipping up Appalachian tunes at The Session before nonchalantly picking up her kids from the babysitter. When the gigs all end, well, that’s when you can jump into a parade at midnight.