Lessons from Moving In and Moving On 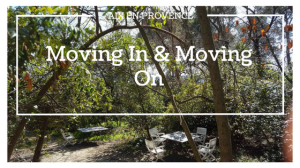 I spent the night before flying to France lying awake in my bed, listening to Michael Bublé's Christmas album on repeat. Not because Christmas was the week before, but because it’s my go-to “goodness gracious Sarah, calm down” music. In 24 hours, my life would completely change. I was consumed with not knowing: what would my surroundings be? What would my host mother be like? On what level is her apartment? Would the other students be nice? Would I have to speak French from the moment I stepped off the plane? Did I pack enough black licorice? You get it…my mind was running away from me.

As nervous as I was, I was in the market for change. I’d spent most of my life up until now wiping my feet at the same welcome mat — and when I wasn’t, I was wishing that I was. But at almost 20, I was finally ready to hang my key behind a different door and call it home, and what a home it was. My first year in college I refused to call my dorm room my “home”— “it’s just a room, not a house,” I’d say. Now I know that at it’s root, a home needs just two things: a place to rest your head, and a place to share a meal with people you love.


I found a lot of little homes like this the past few months, and they hold some of my favorite moments:

Eating peas and chocolate, sitting on an old dock in Venice.


Devouring pretzels with one of my best friends, standing in the middle of a lake in Bavaria.

Sharing plates of kimchi, guac, and mac and cheese with my language class at our end-of-semester picnic in Aix a few weeks ago.

Those memories are worth a whole lot, way more than I knew at the time. And I don’t think they’d be nearly as rich if I hadn’t consciously decided to invest in the moment. Studying abroad, and life in general, is composed of little decisions that make up what we value. And you always have two choices: glaze your eyes over in anticipation for what’s coming next/when you can get back to where you were before, or just rest in reality. I really believe it’s that simple. There is so much life to live where you are now but it has to be your decision to do it. Do the work, have the conversation, open the door. Sometimes life pushes you along without a word left for your own input, but mostly it’s you who has to do the heavy lifting.


There is no magical land or corner on this Earth than can blossom you into the person you stay up at night dreaming about. The roots aren’t going to grow if you don’t plant them, but that’s not to say that the soil isn’t more fertile in one place than another. For a lot of people, taking the chance to study in a brand new place is that fertile soil. It was for me, and I hope it is for you, wherever you are.

I will probably still turn on the Michael Bublé Christmas music sometimes, and it’s okay. But if I could boil down everything I’ve learned this semester - besides actual French - it’s to press into the not knowing. To accept the feeling, but push through and wait until you get to the other side. Because now I know that there is another side. And there’s so much life to live there, you guys.

Thanks for an unbelievable semester, and I will see you soon. I’ve just about 5 hours until I land in Philadelphia.

Sarah S. is the Spring 2017 MOJO Blogger in Aix-en-Provence, France. She is currently a Sophomore studying English Non Fiction Writing & French at University of Pittsburgh.