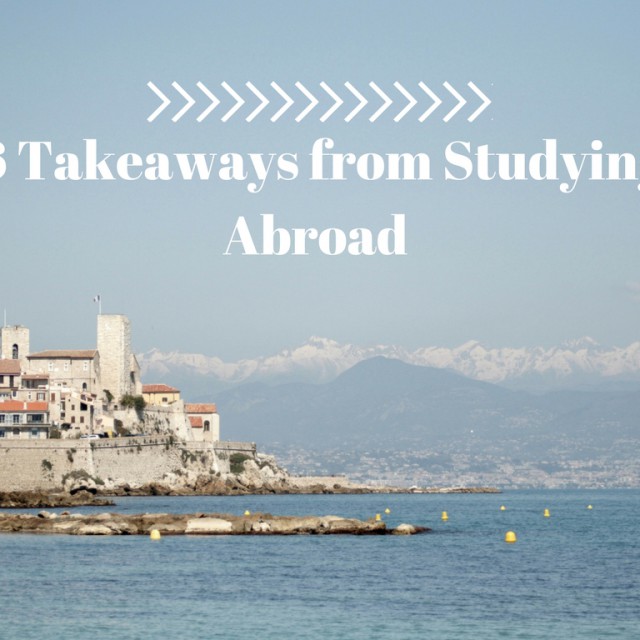 My time abroad is almost over and, as I reflect on the experience, I have compiled six key takeaways gathered from throughout this incredible journey.

Apart from working through academic and cultural differences, I have learned a lot about living independently in the South of France. Learning to grab groceries when grocery stores close early, making diners and creating budgets for expenses all in a foreign context has taught me how to live independently.

It is no secret; French culture is different. Besides the obvious cultural relics like wine, cigarettes and baguettes, a few norms change as well. A notable difference is how people interact. Unlike America, exchanges between bus drivers and cashiers are formal and polite requiring a greeting like “bonjour, monsieur” at the beginning and “au revoir” at the end. With friends and even new acquaintances, the French use “la bise” (an air kiss on each side of the cheek) to greet everyone individually. It was an awkward affair, at first, greeting friends and new acquaintances this way but I have grown accustomed to it.


Some stereotypes are based in reality

Yes, there are reasons for stereotypes. The French really do adore their wine, their fashion and their food. For example, while skiing in the nearby Alps I noticed several French men nonchalantly sitting on the slopes drinking wine. As for fashion, it is a normal sight to see older French men with clothes college kids in America could deem fashionable; skinny jeans and scarves for example. Furthermore, the negative stereotypes of the French as heavy smokers and hard to approach are also partially true, although, after living here for four months, I realize this does not apply to all the French.

Traveling is much cheaper in Europe

Unlike America where the plane tickets are normally above $100 for even short flights, in Europe budget airlines make traveling incredibly cheap. It cost me less than 60 Euro (approximately US equivalent) for a round trip to London. Hostels and Airbnbs are also very cheap making weekend trips a breeze for budget conscious college students like myself.


It is important to capture memories

Between living in an incredibly beautiful region, traveling to amazing locations, learning some of the language and culture and studying for classes, my abroad experience and memories are all a blur. Therefore, I am thankful for the photos and journal entries I have made that remind me of the things I felt and experienced.

A year ago, if someone were to tell me all that I have done this semester, I would not believe them. I have successfully lived in a new country. In its most basic form, studying abroad here in France has revealed who I am and what I am capable of, for that reason alone I would recommend studying abroad to anyone interested.


Kyle S. is the Spring 2017 MOJO Blogger in the French Rivera, France. He is currently a Sophomore studying Marketing at Cedarville University. Kyle Spencer is the Spring 2017 CEA MOJO Blogger in French Riviera, France (Sophia Antipolis) in French Riviera, France (Sophia Antipolis), and is currently studying at Cedarville University.
Leave a comment
Newest on top Oldest on top
Load more comments
Thank you for the comment! Your comment must be approved first