A Stroll to Strahov 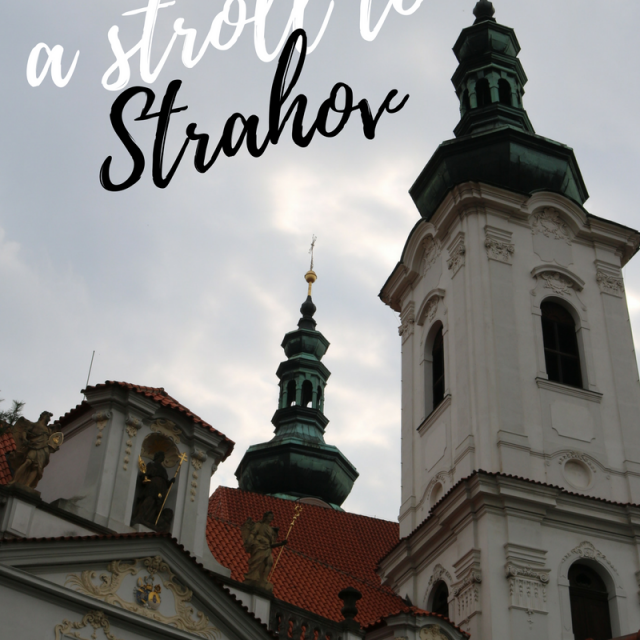 Different from the all-day excursion to Karlovy Vary, some of the excursions that CEA offers are actually located in Prague. These activities are usually on a weekday and last just a few hours. They are a great way to meet other CEA students and learn a little more about Prague. The activities are great because they take us to unique places that I would never be able to find on my own. One of my favorite activities was the Strahov Monastery and Brewery Tour.

The tour met at the CEA center, and we set out on an uphill walk to the monastery and brewery. Our tour guide led us up steep, cobblestoned streets and pointed out significant buildings as we climbed. Along the way we passed the American embassy which she pointed out used to be a luxurious house with wealthy tenants. Eventually we reached the monastery and brewery. The complex includes a basilica, The Basilica of Assumption of Our Lady, the Strahov Library, and the Monastic Brewery. The construction of these began as early as 1143, when a monastic community began to develop in Strahov. The order is still in operation and has about 80 monks today.

Our first stop was the library, where sacred and secular books, natural items, and many other things are housed. The library’s walls were lined with large cases with preserved animal and sea creature skeletons. The monastery shows just two of their halls to visitors, the theological hall and the philosophical hall. Both only allow visitors to look in, but they looked like something from a movie. The shelves were heavily stocked wall-to-wall with texts. The philosophical hall had more than 42,000 books! The ceilings were beautifully painted and have detailed molding. Glass cases with centuries-old manuscripts showcased the beauty of illustrated bibles and other texts.

Right next to the monastery was the brewery, where many people were dining or simply sitting down for a beer. The brewery, though reconstructed, closed, and re-opened over the years, has been in operation since the 13th and 14th centuries. We were served their original St. Norbert beer, named for the founder of the monastic order. The St. Norbert beer is actually housed in the monastery, is made from all-natural ingredients, and contains high levels of vitamin B. One of the brewery workers took us in to see the large tanks where beer is brewed everyday of the year. The brewery produces more than 26,000 gallons of beer each year including various specialized, seasonal beers.

I was amazed by how old the monastic order and the brewery they founded each were. The tour gave me a look into the history of brewing in the Czech Republic, and I realized that Czech’s love of beer is a very old tradition!