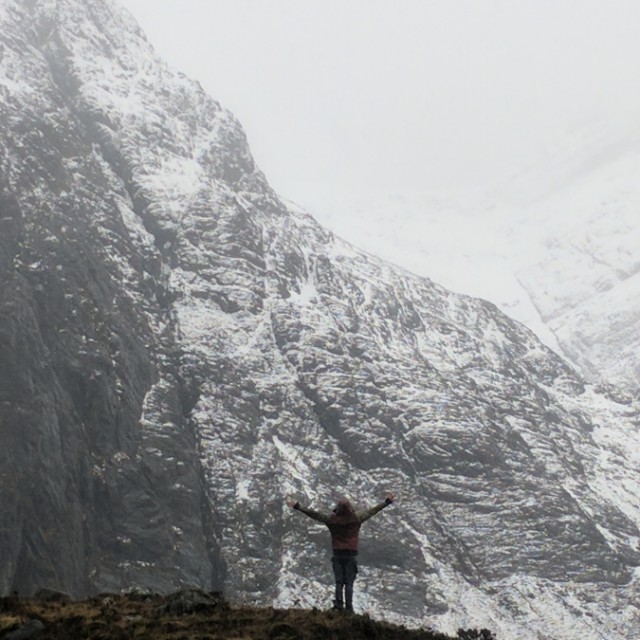 Scotland is a breathtaking country.  Only a 40-minute plane ride from Dublin on Thursday and a quick evening in Edinburgh, I rented a vehicle with some friends and we started our adventure. For most of it, I couldn’t believe that what I was looking at was real. There are so many spots along the road while you're driving to pull of just to look at the scenery. I probably pulled over at these stops for a good hour throughout the trip.

Our first stop was Loch Ness where we did a short hike in the woods on the banks. I really wanted to go say "hi" to Nessy but she didn’t come out. In hindsight I should have stopped at least once along the half hour drive along the loch, but I was so in awe of the views and ready to just keep going that I didn’t get many pictures. From Loch Ness we went to Oban to catch the sunset then to Fort William for the evening where the hostel was.

On Saturday we drove to the Isle of Skye to see the Fairy Pools and Neist Point. Saturday was your classic rainy and cold Scotland weather but the sights were still incredible. A majority of the driving in the Isle of Skye was very narrow and windy single lane roads. If a car was coming the other direction you had to figure out who was going to pull over and let the other vehicle pass you. I also had to stop multiple times for sheep and goats just hanging out on the road. On one occasion, this sheep was immune to the sound of a car horn so I had to roll my window down and “baaa” quite fiercely to get it out of the road.

When we got to the Fairy Pools, we were expecting them to be actual standing pools of water with like rustic tress around them and such but it ended up only being one long stream with beautiful mountain scenery. It was raining heavily so the water was rushing fairly hard, so there was no actually still water for “pools”. I did drank from the pools and it was some of the purest and best tasting water I’ve ever tasted.


From the Fairy Pools we headed toward Neist Point. We drove to Sky’s other coastline then down to Broadford to our hostle and Portree for dinner. The next day we drove through Loch Lomond National Park and then to our last destination with the car, Stirling castle (a good chunk of Braveheart was filmed there). We returned the car and headed back to our first hostel by the Edinburgh castle. I left the girls to go to the Scotch Whiskey Experience and it was so cool! There was a room with over 3,000 bottles collected from one man.


I highly recommend going to Scotland for everyone. I ended up driving for about 850 miles taking 20 hours and it was definitely not enough time.

Sylas S. is the Spring 2017 MOJO Blogger in Dublin, Ireland. He is currently a senior studying Mechanical Engineering at University of Wisconsin-Platteville.
Read more about our CEA Content Creators.
Leave a comment
Newest on top Oldest on top
Load more comments
Thank you for the comment! Your comment must be approved first