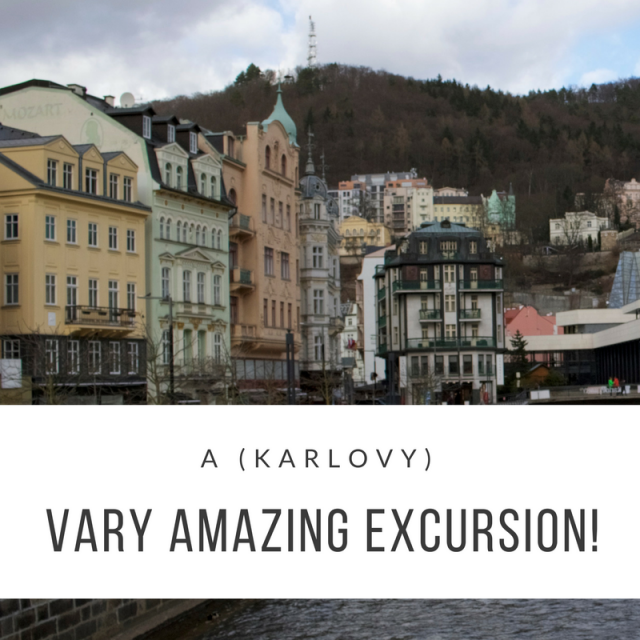 Karlovy Vary: the CEA group met at the train station, loaded the bus, and headed towards our destination. The drive was a beautiful ride through the Czech countryside, and it was interesting to see a part of the Czech Republic that was quite unique from the hustle and bustle of Prague.

After about two hours, we arrived at our first stop: Moser glass museum and factory. The tour began with a video describing the history behind the glass industry in the Czech Republic. I was surprised to learn that the Czech Republic is one of the most well-known locations for its artistry and quality in glass-making. We learned about several techniques and methods of creating the intricate and detailed pieces of glassware. Following the museum tour, we toured the factory itself. The factory has been operating for more than 150 years and was in operation while we were touring! Observing the workers create such perfect and beautiful pieces of glassware with their hands and tools was so interesting and unique! After a walk around the gift shop (where none of us could even think about purchasing anything, it was so expensive), we headed to our next stop.

We went into the city center and ate lunch at the Thermal Hotel. We were presented with an extensive buffet of food of all different types. The Thermal Hotel is one of the biggest hotels in Karlovy Vary and hosts an international film festival each year which draws some headline actors, actresses, and other celebrity figures.


We were then led on a walking city tour of Karlovy Vary. The Ohře River runs right through the city and most of the city is situated around this river. Our tour followed the river as our tour guide pointed out the main attractions, buildings, and points of interest around us. The city is an incredibly colorful town, that looks as if it was out of a movie. The buildings are painted in charming pastels and situated between evergreen-clad mountains all around.

While the town is charming and beautiful, it is most well-known for its reputation as a spa town. It has held this reputation as a popular resort since the 19th century. People from all over the world travel to Karlovy Vary for a little rest and relaxation. The town is also home to many hot springs and geysers, which provide rich mineral water. As we toured the city, our tour guide gave us each a small cup that we could use to fill up to drink water from the hot springs. While the water is enriching and good for rehabilitation, the taste is rather unpleasant. Rich in iron and often hot, the water is not the most enjoyable but it was fun to taste it from each hot spring.

CEA excursions are the perfect way to meet new people and explore unique areas around the Czech Republic. The cost of excursions is included in the program fee, so I would encourage signing up for as many as you can! Some are just a few hours, a few are full-day trips (like this one), and one is a multi-day trip. The transportation, tours, and some other things are included so all you have to do is show up. Someone does all the planning and I just have to show up to enjoy it all? Sounds like a great way to travel!