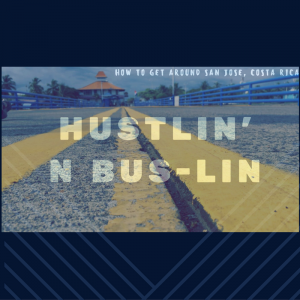 Picture the area you live in and think about all the street signs, numbers and specific addresses that help you figure out where you are. Now imagine all of them have disappeared. No more house numbers, big street signs or exact locations. In Costa Rica, the addresses are quite different. Specific locations use distances from common landmarks such as schools, churches or small businesses. For example: 200 meters south of the old white church, in the Zapote neighborhood. As you can imagine, this makes it a little bit trickier to get around. Despite this, I have held my own so far by utilizing transportation resources around me.

Other than my umbrella, public buses have become my new best friend. Since I live with my host family in San José, which is in the middle of Costa Rica, there are dozens of buses that leave from downtown and go all across the country. Depending on the bus company, tickets may be purchased online or at the bus stop itself. I prefer online, because all I have to do is screenshot the receipt and show it to the driver before I get on the bus.

Tip: buy bus tickets a day or two in advance, whether online or at the bus station, because it guarantees you a seat. Although most buses fit around 50-60 people, you may be stuck “de pie” (standing) if you buy them too late! Take it from me—standing six hours on a bus is as miserable as it sounds.


Taxi Vs. Uber: the Transportation War


As a college student, one of my favorite apps on my phone is Uber. It’s reliable, easy to use and best of all, doesn’t cost much for short-distance rides. Here in Costa Rica, however, Taxi drivers absolutely hate Uber. Since so many people in San José don’t have cars, the competition within the transportation market is fierce. While I have heard stories of Taxi drivers throwing things and yelling at Uber drivers, I have found that Ubers are still much more convenient and cheaper. Taxi drivers are so harsh because Uber drivers seemingly come out of nowhere and take potential customers right off the street. Solution: If I am near a taxi station, I usually call an Uber down the street just to be safe.

In Costa Rica, taxis are red with a yellow triangle on the side. If they only accept cash, there is a yellow taxi sign on top. A supplementary blue sign is seen on taxis that also accept credit cards. So I have been warned, there are drivers out there that have red cars, but no yellow triangle or sign. Do not get in their car! They are not real taxi drivers and usually use an app on their phone that multiplies the normal taxi fare. My advice: always be aware when you are prompted to enter a taxi.

On the Southwest and Northwest coasts of Costa Rica, there are two peninsulas. Why am I telling you this random geography fact? Because it was very important when my group and I took a trip to the Northwest part of the country. It was much faster to take a ferry to the Nicoya Peninsula than it would have been to drive all the way around it. The ferry costs a little bit over a dollar for an hour ride!

Aside from all the rides I get from Taxis, Ubers and buses, I walk a fair amount every day. While walking, one of the first things I realized was how crazy the drivers are. Everyone goes fast, beeps frequently and pedestrians don’t have the right of way. Since there are few crosswalks, jaywalking is completely legal. Despite this, drivers couldn’t care less whether people are crossing the street or not. They rarely slow down, or even let you cross when they’re idle at a stop sign or red light. This is something I had to get used to abroad, as it is the opposite in America.

Overall, getting around San José, or any study abroad city for that matter, is all about doing your research, being careful of your surroundings, and always traveling in groups.