A Postcard From Panamá

Not many people can turn down a trip to Panamá, but as Americans in Costa Rica, our VISAs prohibit us from staying in Costa Rica for more than 90 consecutive days. Being as awesome as they are, CEA took us on a four-day excursion to the beautiful island beaches of Panamá.

On the Road Again

The trip started with a six-hour bus ride from San José, Costa Rica to the border of Panamá. CEA offers a private, air-conditioned bus, where napping is encouraged. We were there in no time! After going through immigration, we walked across a bridge into Panamá. As a group of twenty-one, we individually paid to enter the country and got our passports stamped. The journey continued with a van ride to a dock where we took a boat to Bocos del Toro. The moonlit sky (not to mention streetlights) welcomed us to the gorgeous island of Colón. 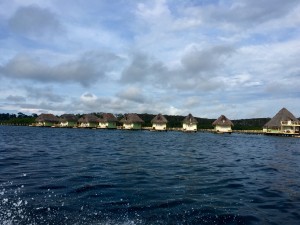 Since we were on an island, a couple of friends and I decided to eat on a dock-front Indian restaurant. We ordered and began to reflect on the ride over. All of a sudden, the lights went out. Not just at our restaurant, but literally the entire island. I know what you’re thinking, and to answer your question, they had gas stoves so our food was on time! We laughed it off, made the best of it and had a great dinner despite not being able to see each other’s faces. After all, it made for a great memory!

On the way to a snorkeling spot, we casually ran into some new acquaintances: dolphins. Five or six boats circled three dolphins, who enjoyed swimming in the wakes and jumping occasionally for their new fans. The energy on our boat was electrifying as they awed each person with each breath of fresh air. Once we got into more transparent water, we were able to hold starfish and see hundreds of tiny fish fly by. I know Costa Rica is known for its biodiversity, but Panamá offers plenty of its own too!

As if snorkeling wasn’t enough, we took a trip to Red Frog Beach the next day. Although it rained a lot, most of our group found fun in playing volleyball and hanging out in the Caribbean. The sand literally felt like a giant sandbox, dark tan in color and soft on the toes. At the end of the beach, I learned why they call it Red Frog Beach. Tiny red frogs, the size of your thumb, roam the jungle-like area next to the shore. What they lacked in size, these frogs made up with their beauty.

To end the trip, we repeated the same passage in reverse order: boat, to bus, to walking across the border and finally a nap-filled bus ride back to San José. I can speak for the entire CEA group in San José when I say this trip was truly unforgettable. Although the purpose of the trip was to renew our VISAs, we were still able to experience the culture of Panamá, meet new people, and enjoy great food. Thank you CEA and as always, Pura Vida!

Andrew M. is the Fall 2016 CEA MOJO in San José, Costa Rica. He is currently a junior studying Physician Assistant Studies at Philadelphia University
Andrew Mantone is the Fall 2016 CEA MOJO Blogger in San Jose, Costa Rica, and is currently studying at Philadelphia University.
Leave a comment
Newest on top Oldest on top
Load more comments
Thank you for the comment! Your comment must be approved first