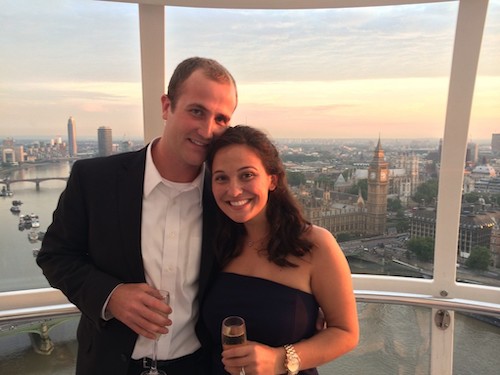 Remember all those new friends you made during your study abroad experience? Could you imagine if one of those friends was the love of your life? It sounds too good to be true, but Mari and Brice (CEA San Jose summer 2010 alumni) made it happen. From Costa Rica to Wisconsin and Texas, this is their story.

Brice and I met on the Fourth of July in 2010 during the CEA introduction tour of San Jose, Costa Rica.  As a student at the University of Wisconsin- La Crosse, I was studying abroad through CEA, and Brice was doing the same as a student from Texas A&M University.  The first night, he asked me if UW-La Crosse was also known as LaX. It turned out that his previous spring break in the Gulf Shores, he had met other college students from UW-La Crosse. Three of the girls were my neighbors! Such a coincidence! We had so many amazing adventures in the short five weeks in Costa Rica. Apart from the CEA excursions and cultural activities, we went snorkeling, hiking down to the bottom of a waterfall, zip lining through the rain forest, and bungee jumping off a bridge.

Our group had amazing experiences that brought us all close together. Brice and I began to get to know each other after the first weekend, and we grew closer as the trip went on. By the fourth week, we realized we had feelings for each other but by then our study abroad experience was coming to the end. We thought we may not see each other again.

When I got home to Wisconsin, I realized I really missed my friends I had met in Costa Rica, specifically the cowboy from Texas. So I decided to take a chance and bought a ticket to Texas! In October, Brice and I were reunited in College Station, TX. He then surprised me the next month by flying in for my 21st birthday, and we have been together ever since. For the next two years, we flew back and forth between Wisconsin and Texas, seeing each other one weekend a month. We even made it fun and picked different cities to meet: Las Vegas, Chicago, New York City, and Washington D.C when Brice had an internship there for a semester.

Finally, we graduated from our undergraduate schools. We both wanted to pursue our graduate degrees, so we chose a place where we could be relatively close to each other. Brice attended Baylor Law School in Waco, TX in the fall of 2012, and I started studying at the AOMA Graduate School of Integrative Medicine in Austin, TX in the winter of 2013. So after being 1,200 miles away, we were now only 100 miles away from each other. Although this would be a stressful long distance relationship for most couples, it was a great improvement from what we had known previously. We drove back and forth almost every weekend to see each other, and we adopted the most important member of our little family from an animal shelter, our dog Roscoe.

The Engagement Story
Last summer, Brice was studying abroad in Aberdeen, Scotland with his law school. Since I have family in England, I decided to visit Brice, and then we would travel to see family. So I flew in to Scotland and we had a such a nice long weekend. Then I flew to London to stay with my auntie and cousins while Brice still had four school days left of classes. Brice met me in London on a Thursday to stay with my auntie, cousin, and me until Sunday. He said he had a dinner planned in the city for Friday night. We had a beautiful dinner at one of the most romantic restaurants in London, Clos Maggiore. Then we walked around Covent Garden, and Brice then told me he had tickets for us to go on the London Eye.


When we got to the ticket booth at the Eye, I realized he had reserved a private capsule just for us with champagne and chocolates to enjoy. I was busy showing him all the different places in the city on the way up, and he seemed to be fidgeting (and not really paying attention to my tour!). At the top, just as the sun was setting, he gave the guide who was with us, his phone so we could get a picture together. That is when he got down on one knee and asked me to marry him! I was so excited and so happy he chose my favorite city in the world to propose.

Brice finished up his classes the next week and then we met in Ireland to tour the country before returning to Austin. He then began his last year of law school while I started back at graduate school for another year. Brice finally finished at Baylor this past May 2015, and I am completing my last year of grad school. Finally after five whole years of long distance, we are now living under one roof. We are planning our wedding in Wisconsin in October of 2016 and couldn’t be more excited. Our dear friend Kylie, who we also met in Costa Rica will be the one marrying us! We are so grateful for our summer in Costa Rica and the CEA study abroad team that allowed our paths to cross.