A Semester in Paris 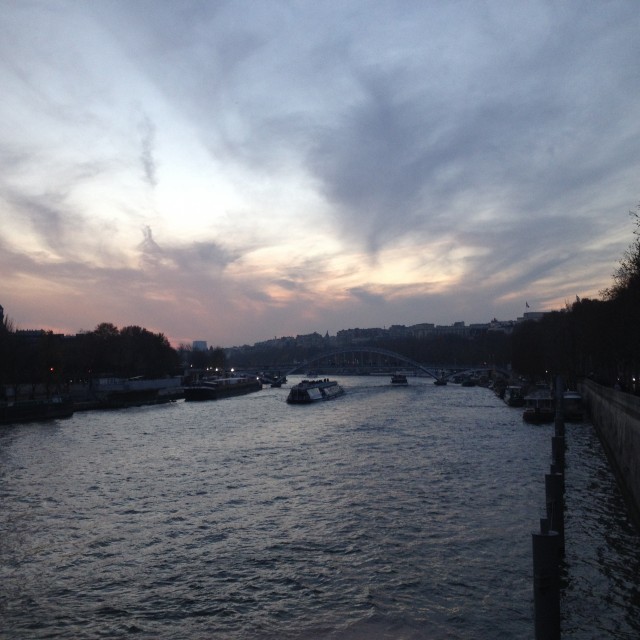 It was raining. The grey clouds were leaking out a Parisian drizzle that I would come to know all too well. I felt gross, jet-lagged and bothered by a headache from riding around town in the stuffy van taking me to my new apartment in Paris.

We turned on to Rue Charles Renouvier, the street I’d live on for the next four months. The driver powered the van forward, stopped, reversed, and stopped again, this time right in front of a creamy orange apartment complex. The color and the apartment’s spacious balconies made the place look like it belonged in Miami. But, of course, this was not Miami, nor the United States, nor a place that spoke a language that I was able to understand.

The driver helped me get my bags and open the first set of doors. I told him that I could take it from there. I pulled out the keys and set of instructions that were inside the orange CEA welcome packet I received just an hour before and, after a brief struggle, figured out how to open the second set of doors. Checkpoint passed. I still had to go to the bathroom, but now all I had to do was take the elevator to the eight floor, turn right, and follow the instructions to open the door to the apartment. I clicked the red arrow to take the elevator upwards, lighting up the button, and waited. Yet, the number showing the elevator’s current floor wasn’t changing. To this day, I have no idea why that would be. I haven’t had a problem since. But at that time on that day, the day I arrived in Paris, August 25, 2014, that elevator was not moving.

So, listening to the pleas of my bladder, I started dragging my luggage up the stairs, in the dark, because I had yet to learn how to turn on the lights. Reaching the eighth floor, I opened the door to the hallway, turned right and walked toward my new home, which I would access after another short struggle with the keys. I turned right and jetted down the hall to the bathroom and finally relieved myself. It wasn’t until afterwards that I realized that the toilet was in the adjacent room, and what I had just used was a bidet.

My three roommates had moved their stuff in, but they weren’t home. I had no television, no food, no concept of where this empty apartment I was sitting in was actually located, and a cell phone without service. I laid down in my new twin-sized bed, and thought to myself, “What. Am. I. Doing??”


Almost four months later, I can’t be any happier with my experience living in what was once that scary, unfamiliar place. Studying abroad has absolutely been one of the greatest decisions I’ve made in my lifetime. I would unequivocally recommend it to anyone with any inkling of interest. It has been a time of tremendous period of growth and discovery, of laughter and fun.

Progress happens when you are out of your comfort zone. Study abroad has been an experience that has verified that sentence for me. Missing out on my school’s football season - which in hindsight, seems ridiculous — and leaving my friends and family for four months were not easy or comfortable decisions to make. Leaving those things behind meant becoming vulnerable. I felt vulnerable in my identity, my surroundings, and my relationships when I moved abroad. Vulnerability is scary; there’s always the risk of failure and uncertainty. But it’s also exciting, as there’s the prospect of success and growth.

There have been times when living in a foreign place has been hard. Times when I’ve felt isolated. The first day was clearly one of those times. I also remember feeling down one morning after a boulanger visibly showed his dissatisfaction toward me after I paid with a 20 Euro bill. He didn’t have much change to give out. I also remember being tricked by a gypsy one afternoon who “found” a nearby gold ring and graciously gave it to me before asking me for money so she could by a sandwich. I gave her some. I remember feeling frustrated that I was not able to understand people speaking French to me, and I can recall struggling with finding an identity in a new place.

But struggle is not always a bad thing. Struggle forces thought, adaptation, and change. The quickest way to teach a kid how to swim is to throw them in to the pool. The trick is — and CEA has this figured out — to give the kid all of the support and resources he needs to make the learning process as easy as possible. You’re not tossed in to a vast, dark, rough ocean all by yourself, but in to the shallow end of your neighborhood pool, with a group of people looking out for you. It makes the process so much easier. I have picked up so much knowledge, both consciously and unconsciously in my time abroad. I’ve picked up on and begun to understand the way the French do things, and it has taught me a lot about my culture back home. It’s enlightening when you realize that all of the reasons you do things, the way you view life and all of its intricacies are culturally constructed. It’s hard to make that realization until you have an idea of how others do things differently.

It has been incredible to see all of these places that I’d only read about or seen pictures of. These magical, imaginary places in my mind have suddenly become so real, so tangible, and so accessible. I’ve made the memories that will last a lifetime in not only Paris but also Dublin, Marseille, Brussels, and many other European cities. The thing is, I haven’t even gotten to the best part yet: the people I’ve met along the way. Places only carry so much value by themselves. They’re empty without people.


I’m fascinated by people and their stories. Does anything really matter besides the people in your life and the way you make them feel? I like to think that the meaning of life is simple: Be happy, spread happy. One of the great things about life is that making other people feel better makes you feel better. It’s fun to see other people’s successes. It’s been incredible to be able to form such unbelievable, once-in-a-lifetime experiences alongside a group of people doing the same thing. I appreciate everyone that’s been a part of this journey in any way - from my family, to my roommates, to the good friends I’ve made in Paris, to the people I’ve had a single conversation with, to the people reading my blogs. I appreciate it all.

I was walking home during one of my last few weeks in Paris, when suddenly I paused, realizing just how casual everything had become to me. The traditions, the monuments, the architecture, the lights, the markets, the scooters, the food, the parks, the buzz; all of the elements of this spectacular city had become my “normal.” And I took a second to appreciate all of it. The journey was coming to an end, and I couldn’t be more thankful for my time abroad. For the friends I’d made, the places I’d visited, the things I’d learned, and the growth I’d achieved.

Riley Duncan is the Fall 2014 MOJO in Paris, France. He is currently a junior at the University of Tennessee.