Not so Nice: A Disastrous Day Trip to an Amazing City

A famous Aix-en-Provence legend is that of Le Mistral, an evil wind that blows into the city every year bringing misfortune to all Aixois. I’d like to preface this recounting of my day trip to Nice by, as the Aixois so often do, blaming Le Mistral for my unlucky day.

A gust of wind blew open my window, the crash jerking me awake to find myself fully clothed, above the sheets, with a puddle of drool on my pillow. I checked my phone to see that I was fifteen minutes shy of missing my 9:00 a.m. bus. I wiped the drool off of my cheek, tearing through my tiny apartment trying to grab my swimsuit and all other beach essentials before bolting down the Cours Mirabeau to the station.

Most of my CEA peers had signed up for a guided group trip to St. Tropez wherein they paid 25 euros to be bussed to one of the trendiest cities in France. Perhaps it was a tendency toward frugality, or maybe the three of us were just too hipster to go with the flow, but Jacqueline, Madeleine, and I planned our own beach trip to Nice for the day. We bought our bus tickets for 10 euros and made a plan to meet at 8:45 a.m. to make the 9:00 a.m. bus.

Jacqueline was waiting for me at the station at 8:50 a.m. I waved, awkwardly speed walking down the street. Right behind me was Madeleine, glasses askew, her backpack falling down to her elbows as she sprinted after us toward the station.

On the bus, Madeleine put her contacts in as I finger-combed the knots out of my hair. Despite the difficulties of the morning, we were unyielding in our idea of what a “Day in Nice” must include. We envisioned ourselves sipping a bottle of Rosé, dipping our toes in the Mediterranean, soaking up some vitamin D. Free from all worries. 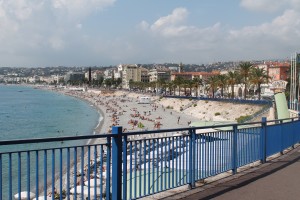 Nice, to our surprise, turned out not to be just a bus station outside of a beautiful Mediterranean beach. It’s actually a large, complicated, interesting city full of gorgeous buildings, wonderful shops, markets, parks, museums, and the most incredible playground I have ever seen. Who’d have thought? We were dropped off at the station in the middle the city where we proceeded on sans carte, forgetting to even note the location of the gare routier (bus station).

The three of us confidently strutted through the streets. We stopped at a flea market (Jacqueline added three vintage records to her collection and Madeleine and I bought tiny ceramic figures to be baked into King’s cakes at Easter), we stopped (after I almost got hit by a bus because I’m now accustomed to the tiny streets of Aix) at a boulangerie and ordered une baguette (we got two baguettes because my une sounded more like a deux), and we found a café to have a drink before we hit the beach (Jacqueline accidentally dropped a 20 euro bill down the storm drain beside our table). The theme of the morning was “just brush it off” and we balanced each tiny disaster with a tiny moment of fortune.

The Mediterranean is magical. We slowly crawled over the stony beach, our virgin feet used to American finely ground sand. After applying sunscreen (which we had to buy for a ridiculous 8 euros at a nearby bodega, since we forgot to bring our own), we dove into the crisp blue spray. Swimming in the Med is unlike anything I’ve ever done. The water is soft and bluer than blue and salty enough that swimming barely takes any effort.  We floated in that magnificent water for hours.


The precarious rock path from the water to the beach made stumbling drunkards of even the most seasoned beach goers, the waves shifting the earth under our feet. Jacqueline slipped and cut her hip on the sliding stones, a deserved battle scar of this discordant excursion. The sea had relaxed us so much we didn’t even think to check the time as we dried out on our towels. It was 4:20 p.m. before we looked at a clock. Forty-five minutes until the bus left. And we had no idea how to get back to the station.

We threw our clothes over our damp bathing suits, shoved what was left of our baguette into a bag, and ran full speed toward…anywhere. There was no time to deliberate over directions; we had a general idea of where the station was, so we started running that way. A few buses passed, further confirmation that we were headed the right way (or so we thought). The road began to wind, houses and palm trees got bigger and suspiciously less urban. It was 5:00 p.m., fifteen minutes before our bus departure, when we finally tried asking someone if we were almost there. After laughing at our broken French and our horrible American accents, a man walking his dog told us that we’d gone four kilometers in the wrong direction.


The street started spinning and we all stared at each other in horror. It was 5:02 p.m. I didn’t even say anything to Madeleine or Jacqueline, I just turned and started sprinting down the residential street we were on, my camera bouncing against my leg, my Old Navy flip flops loudly clacking on the pavement. The usual paranoia I have about being a blatant tourist disappeared as the three of us barreled through the city, weaving through the streets until we were totally lost. Again.

Jacqueline was trying to ask someone else for more specific directions and Madeleine was trying to connect to a local Wi-Fi network. I was trying not to throw up. Before coming to France, I’d never traveled on my own and the idea of being stuck without money in this foreign place where I didn’t speak the language well was too much for me to handle.

As it so often does, Google maps came to our rescue. Madeleine connected to Wi-Fi and we were able to weave our way back through the city to find the bus station. Triumphant, we ran to the information station only to slam against a locked door. We’d missed the last bus of the day. A frazzled station agent came out to our desperate knocking. But there was nothing to be done. We were in Nice for the night.

We were silent the whole tramway to the youth hostel. Madeleine finally broke the silence to say “Ha, I guess Saint Tropez would have been cheaper after all!” We didn’t respond.

We paid the thirty euros for a bed for the night and, exhausted, climbed up three flights of stairs. I dropped my sea-soaked backpack onto the bed next to a nice, very naked, older French lady drying her hair. The room was packed wall to wall with bunk beds.

Since it was too early to go to sleep, the three of us scrounged up the last of our euros and bought a feast of chips, cheese, cookies, and fruit at the Casino grocery store down the street. We laid everything out in one of the hostel’s common areas and cheered to our fine dining. An old Welsh man wielding a large package of pâté sat down with us and recounted his history as a “glorified extra” in assorted BBC dramas. Listening to him talk about his role as “stuffy lord” in the upcoming rendition of Tarzan was hilarious, but his pâté smelled horrible so we snuck out as soon as we could.


Nice came alive at night. Statues that seemed commonplace during the say were lit up in neon blues and pinks. Street performers littered the streets. Strings of bright lights crisscrossed above the main boulevard. We found a few euros to buy some gelato and strolled through the town center. Even the children of Nice were feeling the city. Jacqueline, Madeleine, and I sat on a bench watching the children tire themselves out on the incredible jungle gyms shaped as various sea creatures. We were waiting for them to get tired out so we could have a go on the playground, but by 11:30 p.m., they were still going strong and we were fading fast. We headed back to the hostel and managed not to get lost this time.

The next morning we grabbed our complementary petit déjeuner and made it to the bus with time to spare. Three hours later we were rolling into the Aix bus station. The relief that I felt as we pulled into the beautiful old city was the first time I’ve associated Aix with home. It took a chaotic, unexpected day trip to realize how comfortable I am becoming with the crooked streets of Aix. I am so grateful to be living in this gorgeous little city for the next three months and I know that the next trip I go on, I will definitely be bringing a map.

Bridget Stemmler is the Fall 2014 CEA MOJO in Aix-en-Provence, France. She is currently a sophomore at Northeastern University.