Celebrating “la Diada” with some of the CEA Barcelona students was even more exciting than with the “locals.” People attending the human V were a bit confused as they thought I was American, too. However, this confusion made me realize how Catalans in the demo truly wanted foreigners to catch the message that they wanted to give to the world: “We had enough, now it’s time to vote.” (Or in Catalan, Ara és l’hora)


"If Obama could see us for two seconds, it would be more than enough.” That is what a man in his fifties said when he realized that the CEA students were from the U.S.A. After talking to the locals, the students, all girls, decided to join the V. It was good that they were willing to join as Anna and I wanted to be there as well. Although we were not registered, we could form part of the V. I suppose the girls felt comfortable inside the demo and not outside it.  Unconsciously, they ended up being Catalans for one day, and more importantly, they supported us.

It is hard to believe how a date like the 11S involves different feelings within two different societies. For both societies, the Catalan and the American, the 11S is a commemoration day. However, the history behind it is completely divergent. For the Catalans this year, apart from being its National day, it coincided with the commemoration of 300 years since Catalonia lost its freedom. Anyway, la Diada was very touching as we could get to see “els Castellers” or human towers, “els Gegants” and Catalan traditional music as well as the anthem “Els Segadors” was played and sung all around.


Tyler Karahalios, a sophomore CEA students from Stanford University in California, shares her perspective on this event: 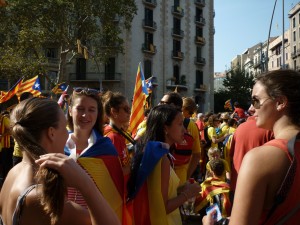 from the Catalunya flags hanging from the windows to the signs in Catalan on the streets.

Given the possibility of the impending referendum for Catalunian independence, this day is even more important for Catalunya. It is a day in which they can all come together and show to the world their Catalonian pride on a day that nowhere else in Spain celebrates or holds sacred. This is a day of solidarity acknowledging that while Catalunya may have lost its independence, it's distinct culture and spirit are still very much alive.

A group of us went to Gran Via to be a part of the huge "V" that was being created to represent Victory, Votar and Voluntat. It was organized chaos. There were thousands of people crowding the streets all clad in bright red or yellow with many sporting Catalonian flags. We snaked our way into the middle of the "V" and waited for 17:14 (5:14pm) at which time a helicopter would fly over to take a picture of the huge V. While in line, we heard Catalonian songs, chanted "in-inde-indepedencia!," and saw Castellers who created incredible human towers. At 17:14, the helicopter flew over and everyone erupted into cheers. It was incredible to be a part of something so powerful and energetic.


Experiencing La Diada, I learned about the richness and distinctiveness of Catalan 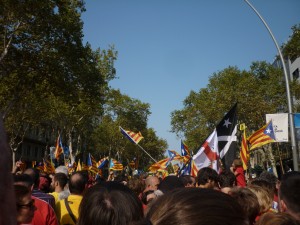 culture. Before, when hearing about the referendum for independence I was somewhat surprised as it could have catastrophic economic effects. However, after going to La Diada I realized that Catalunya has a culture of its own that goes beyond just having a separate language and is actually a different identity. While I don't have an opinion on the referendum, La Diada gave me more clarity its importance for Catalonians.
Read more about our CEA Content Creators.
Leave a comment
Newest on top Oldest on top
Load more comments
Thank you for the comment! Your comment must be approved first