Oh The Places You'll Go (And The People You'll Meet) Studying Abroad: A Weekend In Malta

I got to thinking the other day, and realized that I have yet to blog about one of my very favorite parts of studying abroad! It's the people you meet; there's something about traveling that brings people together.


Sometimes it's fleeting, hearing a rare bit of English outside the boulangerie or seeing a fellow backpack-wearing American on Cours Mirabeau. You exchange that little nod, the one that says something like kudos, fellow traveler. Because we're in the same boat. The backpacker, the Canadian bread-buyer, and me.

Two weekends ago, two friends and I traveled on a whim to a country two months ago I never knew existed. Malta is a cluster of islands just off the boot of Italy that is  rich with history, with megalithic temples that date back to between 3000 BC and 700 BC, many of which are UNESCO World Heritage Sites. The people speak both English and Maltese, and many of them can be found running along St. Julien's pier around 7:30 in the morning, waving to sailors on brightly-colored boats. 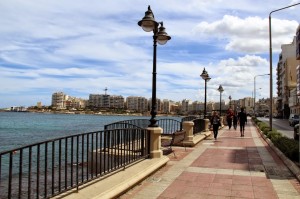 Of all the places I've been, Malta may have captivated me the most.The landscape is harsh and imposing, the architecture bleached to a dusty beige. Flowers and icons of saints fill the windowsills. The water is as clear as glass, spilling over white sands and rocks, splashing against dramatic and imposing cliffs.

N0w silly as it may sound, I've found that taking pictures is a fantastic way to meet poeple. And standing on the cliffs of Blue Lagoon, three guys around our age ask us to take a photo of them. They were all from England, visiting for the weekend. So we got to talking, planning to meet them for drinks later that night. 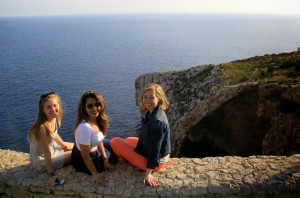 Contact information all set up, we say our goodbyes and leave to catch the bus. But it flies by right as we get to the stop, so we're left squinting in the sun. But lo and behold, here come are our new British friends, walking towards their car. "Missed our bus," we holler, "next one's not for an hour and a half." They look at us, and look back at their car. "Well, you might could fit... Want a ride?" And to the jealous glares of the others waiting at the bus stop, sprint to their tiny car. 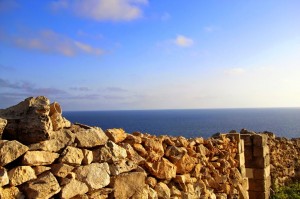 With two in the front and three in the back, I slide onto Ashlynn's lap with legs across Emily's. Which was all good and fine until I realize that in order to back up the car and avoid being stopped by cops, I have to lay across the back with my head in one of the guys' laps. The car peels out of the lot, and as I'm thrown down and covered with someone's jean jacket, he plays with my hair and grins,"Come here often?" Oh jeez. 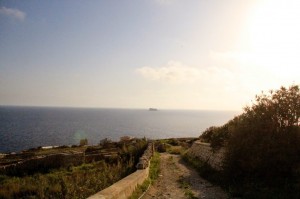 So off we went, traipsing across the Maltese country-side on the wrong side of the road for two hours, blasting Macklemore, stuffed like sardines a clown car with three Brits who can't read a map.
If you ever get the chance to go to Malta, rent a car (or better yet, hitch a ride) and just get lost on the dusty roads. Bonus points if you roll down the windows, drive just a little too fast, and ditch the map; sometimes you have to get a little lost to find what you're looking for.


The next day, we went to the beach at Golden Bay. It's a half-moon inlet with fine white sands enclosed with rocky cliffs on either side that are overflowing with mimosas. And as we were walking, we met Evan, an American visiting his mom in Malta. And before we knew it, we were all running together through the flower fields. Sadly though, we were never able to meet up for dinner since we couldn't find him on Facebook (sorry Evan!). 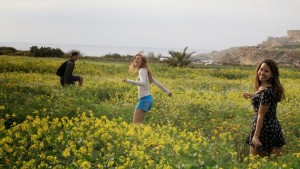 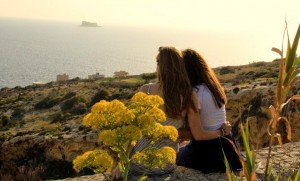 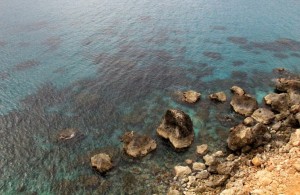 On our very last day, while sitting in the cafe taking Instagrams of our drinks like typical tourists, two men, one with a pristine English accent and a hearty laugh, the other bookish with graying hair and a quiet yet thick Maltese intonation, began talking to us, eager to rave about their country with tourists. It turns out they were both Maltese, one who had studied in England but had grown up in St. Julien's, the other a retired history lecturer. 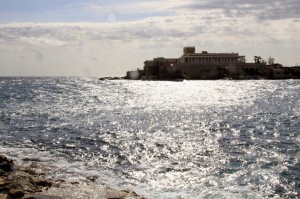 In just an hour, we were given a list of places to go, monuments to see, local beaches to check out, and two eager and willing tour guides. All under the cloud of a plane to catch in two hours. It was such a shame to have to leave our new friends. But that quick connection was incredible--just from a conversation in a cafe, we now have two tour guides in Malta, along with a place to stay should we ever find ourselves on its rocky cliffs again.
Moral of the story is that, while studying abroad, take every chance you can to talk to the people you meet, and keep up those connections. There is no better way to learn about a country from a local, and no better way to get lost than with fellow tourists. It's the people that make the experience, and there's always time for a little culture sharing. And who knows? You may see them again someday.

Lindsay Bayne is the Spring 2014 CEA MOJO in Aix-en-Provence, France. She is a junior at the University of Pittsburgh.