There are different types of treats in Granada. Obviously, the cuisine of Granada is one of the best treats for me. Over the course of two months, I’ve had the opportunity to taste traditional lunches and dinners of Spain. My favorite typical Spanish dinner is a tortilla. It is similar to an omelet in the United States, but it is made with potatoes and onions (instead of bacon and cheese, like it would be in the States.) It is also a lot thicker than an omelet in a U.S. diner.

I’ve also tasted typical dishes from Granada. My señora has cooked morcillo, chorizo, berenjenas con miel, and various soups and stews. The paella that my señora makes is additionally authentic and delicious, with peppers, rice, onions, and meat.  While all of my señora’s cooking is authentic food that any family in Granada would eat, the idea of tapas goes hand-in-hand with Granada as well.

Tapas are similar to appetizers in the United States, as they are small dishes of food. My favorite tapas so far have been pincho de cerdo  (grilled pork skewer,) and croquetas (potato croquettes). Depending on the tapas bar, you can choose your tapas, or the waiter selects them for you. While other cities in Spain all offer tapas, the tapas in Granada are free if you order a drink. Yes, free!
As far as bakery items go, it seems like I can’t walk a few feet without seeing another pasteleria (bakery or pastry shop). While there are cookies, cakes, and bread that look scrumptious, my favorite item has been a napolitana, which, in my best description, is a rectangular shaped croissant with chocolate inside. My friends and I have even embarked on a mission to find the best napolitana in Granada.

Of course, another treat that Granada has to offer is churros con chocolate. Again, it seems like every café in town offers them. For anyone that doesn’t know, a churro is a fried dough ring that is usually dipped in thick, hot chocolate. They are like heaven to me, since chocolate is one of my favorite foods. I feel like I’m going to gain weight just from eating so many of them. While the most  famous churros in Granada are Café Futbol’s, I’ve heard that other cafés compete with them to be the “best” in town. 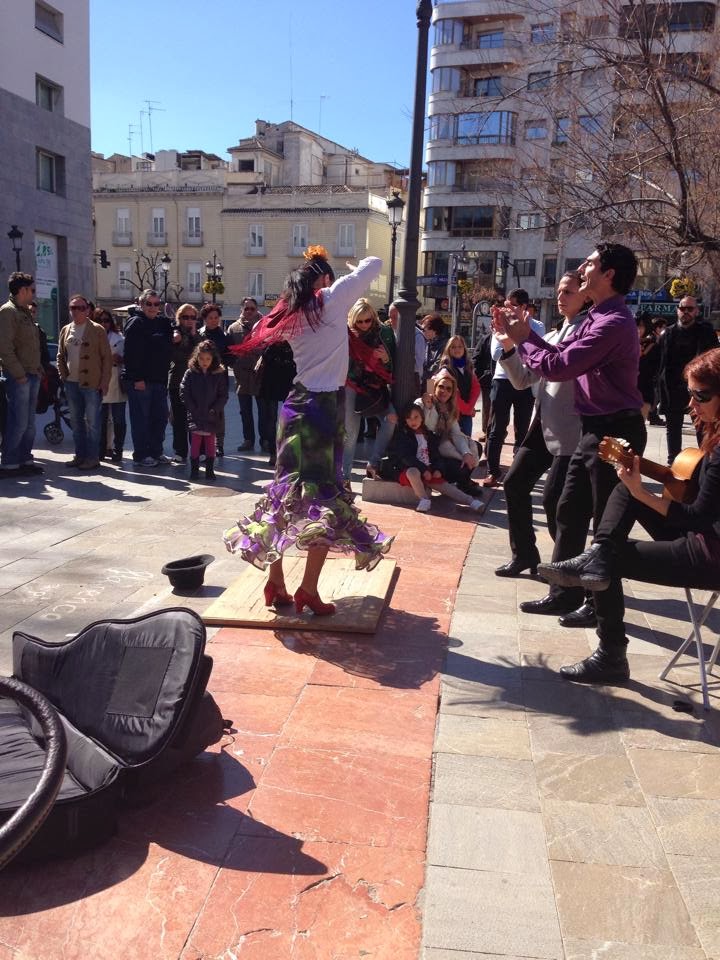 Other treats in Granada are everyday occurrences. One treat in Granada is street art, which I’ve learned is very different from “graffiti.” The street art ranges from scenes of everyday people, including a man walking his horse along a dirt road, to simple objects, like bubbles. They are usually full of color and just seem to flow effortlessly. Walking to and from school and discovering new street art is a joy.

I also have seen a free flamenco show while walking around town, as well as musicians performing. The free flamenco show was outstanding, as it was one flamenco dancer, the flamenco singer, and the guitar player. The dancer was wearing traditional flamenco dress, while only dancing on a wooden board that seemed to be the size of a small poster. It was definitely the most authentic flamenco show I have had the opportunity to see so far.


Treats in Granada seem to pop up everyday. Living here for five months is definitely a treat that I'm enjoying.
Mia Polizzotto is the Spring 2014 CEA MOJO in Granada, Spain. She is currently a junior at York College of Pennsylvania.
Read more about our CEA Content Creators.
Leave a comment
Newest on top Oldest on top
Load more comments
Thank you for the comment! Your comment must be approved first