The French Riviera in Five Courses: Exploring Cuisine in Nice

February 05, 2014
by CEA Content Creator
SHARE SHARE
Living in Antibes, you get the benefits of a smaller city (everything within walking distance, friendly people, and it’s difficult to get lost) while being close to a big, busy city: Nice. After class one Friday I took the train to Nice with three friends from CEA. We wanted to shop along Rue Jean Médecin because the sales are going on (in France, all stores have sales at the same time for about four weeks). However, the best part of our trip to Nice was our dinner.

I’d made reservations at a restaurant called Lou Balico, which our CEA guide had recommended as a good place to go for a typical Niçoise meal. My friends and I walked into the restaurant at 7:00 p.m. for our reservation (not very French, but we had a train to catch) and were seated right away. The waiter brought us croutons with herbs and garlic to munch on while we decided what to order. One of my friends ordered the Salade Niçoise, and my other two friends and I ordered the Menu Balico. 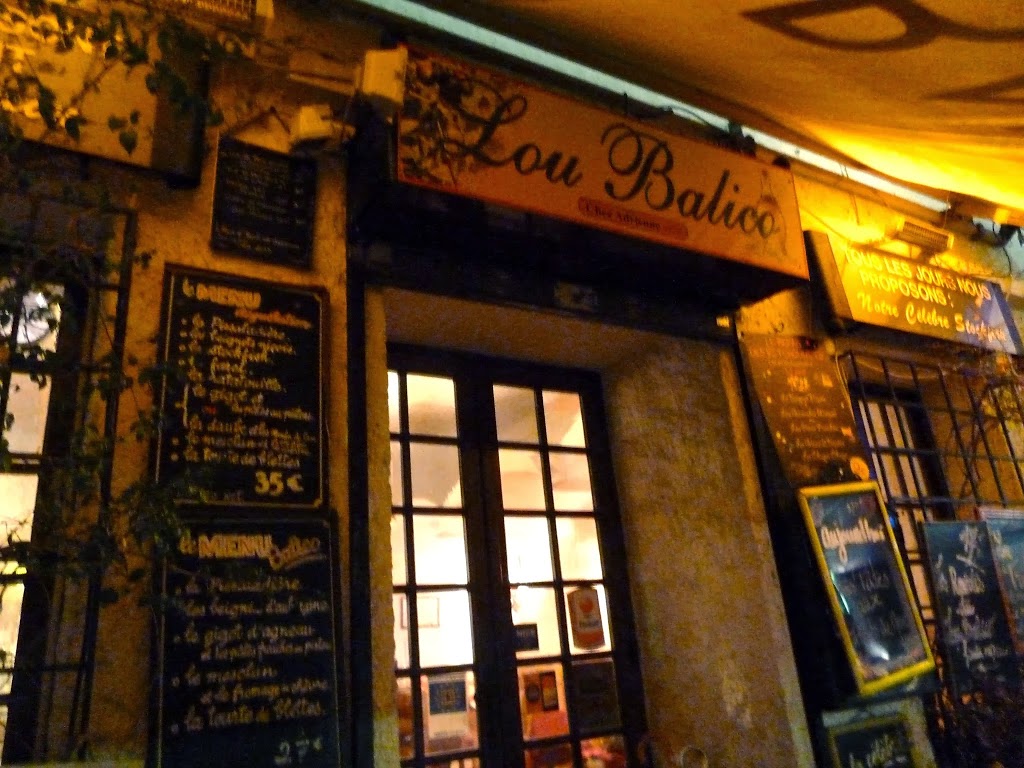 The entrance to Lou Balico

This five course meal began with pissaladière, a Provençal dish that is similar to a pizza. It’s made from onions, anchovies and olives served on a thin, rectangular piece of bread. Next we had les beignets d’aubergine (eggplant fritters). This dish was my favorite out of the entire meal. The eggplant was soft and fluffy, and was served with some sort of green sauce that made it even better.

Our main course came third: we had le gigot d’agneau avec la pâte fraîche au pistou (lamb with pesto pasta). There was so much food on the plate, but it was too good to leave anything uneaten! 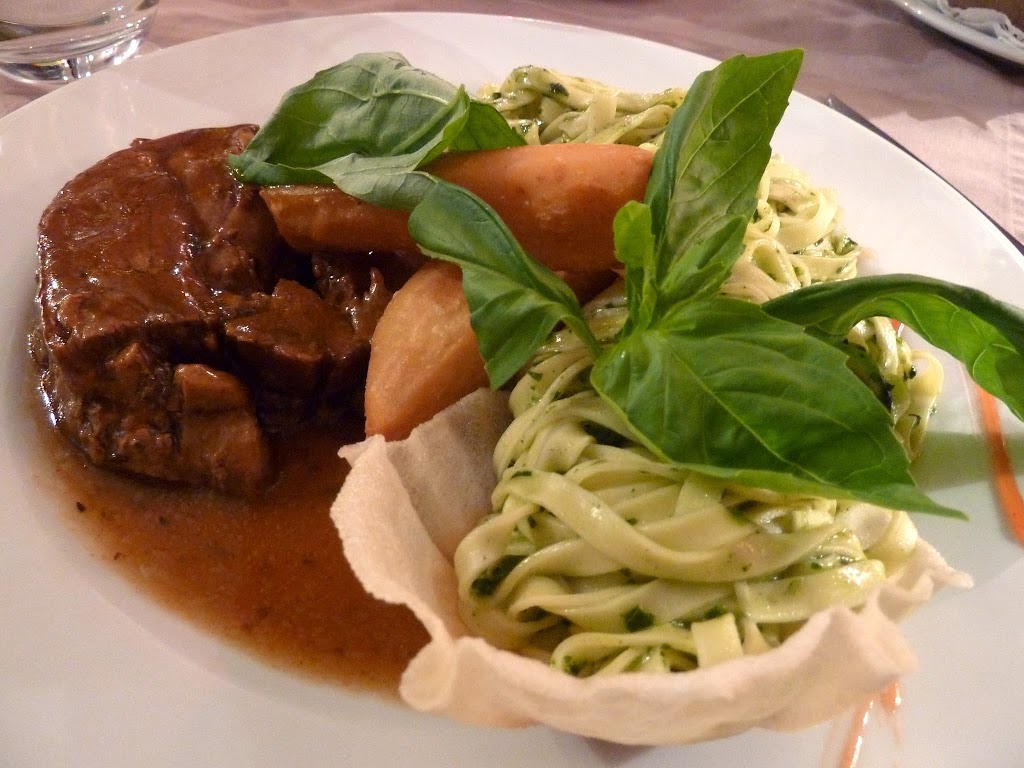 The fourth dish was a small salad with goat cheese in olive oil. My friends and I were given a bowl of tiny pieces of ham and a bowl of croutons to add to the salad, lettuce and cheese on our individual plates.

Lastly was dessert. We each ordered something different so we could share and sample multiple dishes. One was a bowl of three flavors of ice cream: caramel, coco (coconut), and cassis (blackcurrant; we all agreed this was the best flavor). We had crème brulée, which was burnt to perfection with a thin, crispy layer of sugar on top and a smooth, creamy layer underneath. And we had la tourte de blette. When the waiter described this dish to us, it didn’t sound like a dessert, because it has vegetables in it, but we tried it anyway. I’m so glad we did, because it was my favorite dessert! It was a small, bready dish with vegetables (I think spinach) and pine nuts in the middle, powdered sugar on top, and applesauce on the side. 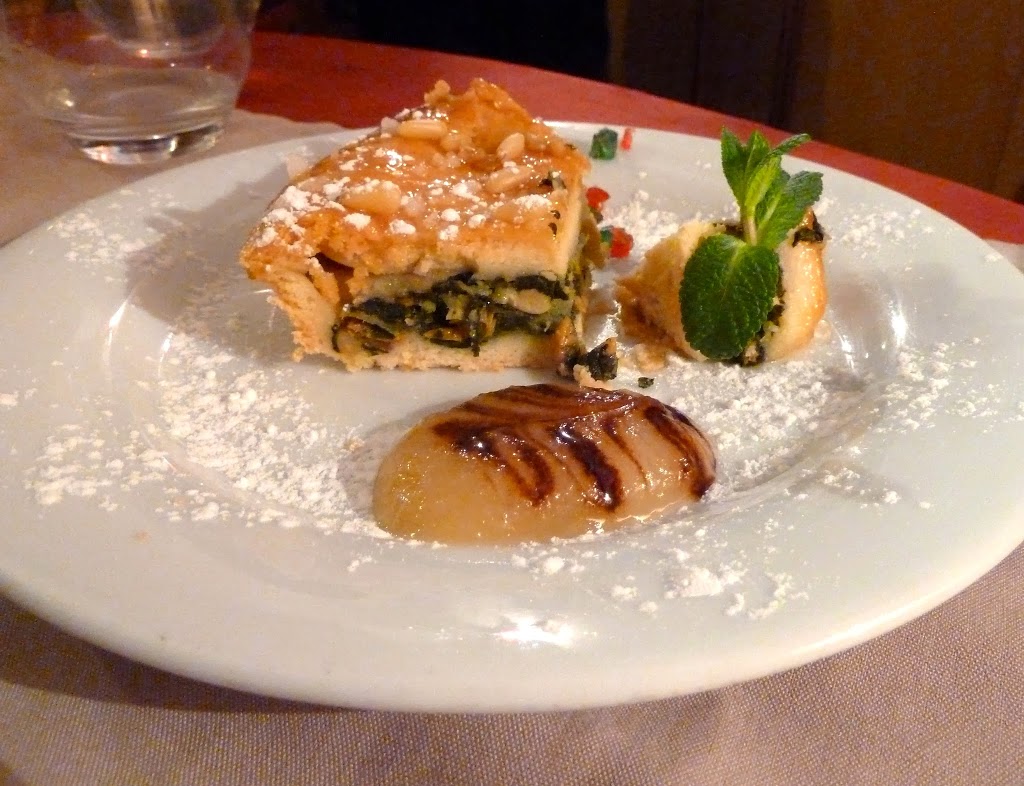 La tourte de blette
This meal was more than I usually spend on a dinner, but it was worth it. Don’t be afraid to treat yourself when people who know the area give you recommendations – they know what they’re talking about!
Lucy Havens is the Spring 2014 CEA MOJO in the French Riviera. She is currently a junior at Carnegie Mellon University.
Read more about our CEA Content Creators.
Leave a comment
Newest on top Oldest on top
Load more comments
Thank you for the comment! Your comment must be approved first