Why You Should Attend the Theatre while Studying Abroad in London

January 15, 2014
by CEA Content Creator
SHARE SHARE
One of my favorite parts about the great city of London, is everything it has to offer in the forms of entertainment. During my time studying abroad in London, I chose to take classes that I knew I would thoroughly enjoy, ones that would keep me immersed into the cultural of London. Taking hard and heavy courses would have left me not having time for other activities. I figured that while I am here in London, I should do a light load of school work and enjoy the things I love, such as acting, film, and theatre. 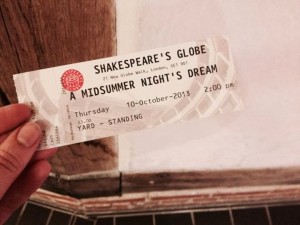 Currently, I am taking a class over London Theatre and Performance because my focus at University is to revolve my studies around those things that I love. Over the course of the past 4 months, I have tried to see as many productions of film and theatre as I can. Like other major cities, London’s theatre and film industry is thriving, so there are plenty of things to involve myself in.
Just walking throughout the tube stations and along the streets, there are advertisements for all the amazing productions running in London. Just the excitement of seeing all the posters drives my desire to see them all.

One of my favorite parts of town is The West End, where there are so many different kinds of theatres running the plays. Over the course of the past 4 months, I have seen about eight productions, and hopefully more in counting.

The plays that I have seen so far are……
All of which were were exceptionally good, except for two which were not necessarily my taste, Phantom of the Opera, and The Woman in Black. 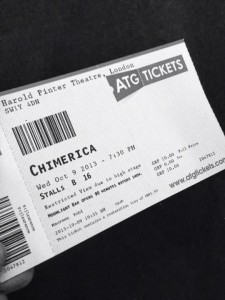 My favorite play has been Chimerica, which is a humorous/dramatic political show about a photojournalist who is searching for the unknown rebellious man in a picture he took during a Chinese tank invasion. In order to show the major set changes between America and China, the play made great use out of a large revolving cube with several different compartments. When one face of the cube was shown to the audience, there would be a restaurant scene, and then the cube would turn and a house setting would appear. The set was designed by Es Devlin who has been the creative director for many touring artists such as Rhianna, Kanye West, Jay Z, and Lady Gaga! Pretty amazing when considering such a harsh subject, and bringing modern art and design.
Extremely hilarious and entertaining, One Man, Two Guvnors and A Midsummer Night’s Dream were extremely interesting and high up on my recommended list of shows to go see. One Man, Two Guvnors is what people call a ‘celebration of British comedy’ full of one-liners and slapstick comedy while also making great use of audience participation. A Midsummer Night’s Dream is a Shakespearean comical spin on a ‘four person lovers quarrel’, with everyone falling in love with one another. It was performed in the new and improved famous theatre The Globe, in the South Banks of London. 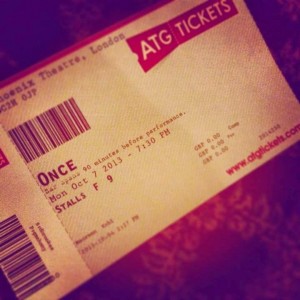 Last but not least are the Musicals! Of course, musicals captivate me more so than straight plays. The Light Princess, was a lighthearted fairytale type of story. Matilda, my second favorite play that I have seen here was a riveting story casted mainly with extremely talented children who stole the show by their singing and dancing skills! And then there's Once, a love story, who doesn't love a good love story!
Having seen all the plays I have here in London, has made me want to participate more in theatre when I get back to the States. I someday hope to participate in a production such as the inspirational ones I have seen here in London.
Laura Koch is the Fall 2013 CEA MOJO in London, England. She is currently a Sophomore at Georgia State in Atlanta.
Read more about our CEA Content Creators.
Leave a comment
Newest on top Oldest on top
Load more comments
Thank you for the comment! Your comment must be approved first