How Studying Abroad During Football Season IS Possible 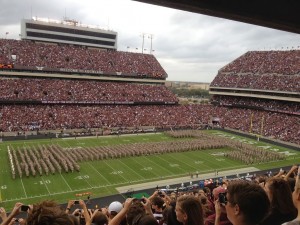 The south was forever changed because a man named Herty persuaded some students at Auburn University to try a game he had seen in the East. Not too long after this, the start of the South's oldest football rivalry was born, Auburn vs. Georgia. Football turns  the south into a collection of overly competitive states whose fans have great pride in their teams. Autumn Saturdays become reserved for trash-talking and earning bragging rights, as 22 men toss themselves at each other on turf fields in Oxford, Tuscaloosa, Baton Rouge, and many more! 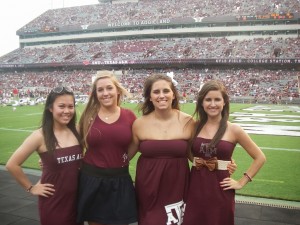 Football, especially Texas A&M football, has become a commodity I have grown to love since becoming a member of the Texas A&M class of 2014. I've literally been to EVERY single home game since I was a freshman. Making the decision to study abroad during football season was difficult...especially during my senior year.

I understand football, I love football, I live for Game Day. Needless to say, Chileans don't exactly share my love for football here, in fact I think the majority of people around the world don't even understand the game of football.

Instead, Chileans and other Latin Americans all share the love I have for football for fútbol! 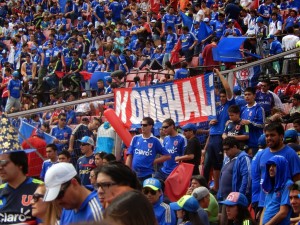 Although when I was younger I played soccer, I had never cared to keep up with the soccer brackets. My sport has always and will always be football. Living in Chile I have adopted a cliché "when in Rome" attitude - so attending a soccer game wasn't even a question! Attending a game was SUCH a surreal experience. After an entire semester of not attending a single football game I was SO excited for "game day".  Seeing these fans so passionate about their soccer team made me feel right at home, even if Kyle Field was thousands of miles away! I wouldn't have traded this soccer game experience for a Texas A&M national football championship! Worth every penny.
Fútbol 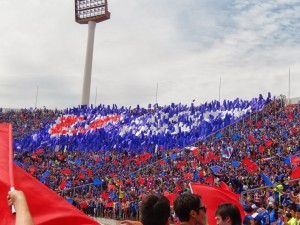 Where to sit:
For gringos, the game is best watched from the Tribuna sections. It's advised to avoid the galeria sections, especially games between Colo-Colo, Universidad de Chile (La “U”) and Universidad Catolica (La Catolica).

The galeria section is the location for those very religious fans. These teams are ‘the big 3' out of the 6 teams from Santiago, and these games attract HUGE support... double emphasis on huge! 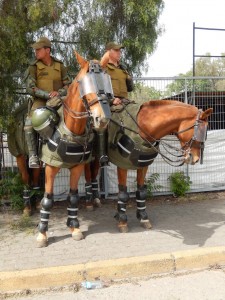 What NOT to do:
We chose to opt out of this warning and save a couple bucks by sitting in the galeria... BIG MISTAKE. Seats are not assigned for club games, only sections, and five minutes before the game started we had a flood of Chileans come and stand on top of the guard railing in front of our seats. Clearly we we're going to have to find new seats in a packed stadium.

We scurried and scrambled past a sea of blue La "U" shirts and found a few empty seats in the front row. WOW, right? THE FRONT ROW!? Not exactly, the view was minimal as the avid supporters were screaming for their team on top of the guard railing that separated the field and the stands, but whatever vive en Chile! It was still a blast and QUITE the cultural experience!
THE GAME DAY STADIUM: 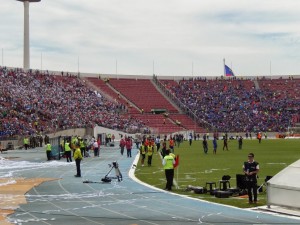 Buying tickets: The most reliable/convenient option to purchase your tickets as a foreigner is at the stadium ticket office before the game. For games between the big three, it is better to buy your tickets a few days in advance.

Ticket prices for club games will set you back about $5,000 Chilean pesos (US$10) for corner seats and the galeria (the section to avoid as a foreigner behind the goals), to as much as $22,000 Chilean pesos (US$44) for the privileged seats with the best view in the Tribuna (along the side of the field). 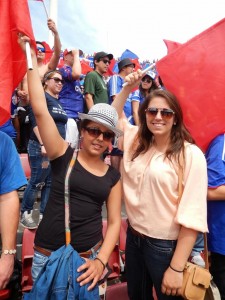 We planed a weekend exploring Santiago and purchased La Catolica vs. La "U" tickets at the stadium the Friday before the Sunday game. This was largely because the online daleticket system refused to accept my visa card, or any of my friends visa card, as a form of payment.

Warning: you'll need a copy of your passport in order to buy tickets as a foreigner! If you absolutely don't want to make the trek to the stadium and want to attempt to order tickets online then here is some helpful information: 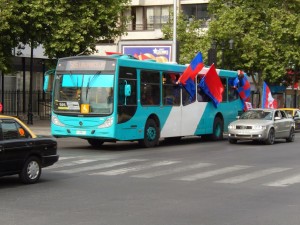 How to get to the stadium: All the club teams have their own stadium except U of Chile who rents the National Stadium for its home games. All the stadiums are easily accessed by metro. I highly suggest purchasing a bip metro/micro card for around $1300 CLP (~$2.50) especially if you need to take a bus while in Santiago - you MUST have a card. Cards are easily purchased at any metro counter and some connivence stores.

(1) Colo-Colo plays at the Estadio Monumental take the metro  to Pedrero station (2) U of Chile plays at Estadio Nacional, take the Metro to Ñuble (3) Universidad Catolica plays at San Carlos de Apoquindotake the Metro to the Los Dominicos station and take the red bus #C02.

If you have any other questions just ask around, Chileans were so helpful helping us gringos find our way through the GIANT city! I also asked my hostel owner a million times for directions and she was so helpful in finding information for me! If you can understand the six metro lines you can navigate the entire city of Santiago. If you would rather have a map ask any corner store for if they sell "MapCity" it's only about $4000 CLP ($8) and if a great substitute for not having a GPS!
THE METRO RIDE:


P.S. HERE IS A CHANT TO LEARN IF YOU MAKE IT TO A U OF CHILE GAME:
U-U-U-CHI-CHI-CHI-LE-LE-LE UNIVERSIDAD DE CHILE
¡Salud! Danielle Banks is the Fall 2013 CEA MOJO in Viña Del Mar, Chile. She is currently a senior at Texas A&M University
.
Read more about our CEA Content Creators.
Leave a comment
Newest on top Oldest on top
Load more comments
Thank you for the comment! Your comment must be approved first