December 26, 2013
by CEA Content Creator
SHARE SHARE
Just like we have a plethora of slang words in English, Costa Ricans have a slew of their own words and phrases that go right over many gringos heads (including myself for the first few weeks here).

When listening to bits of conversations around campus and among younger ticos, you will hear an abundance of tiquismos (Costa Rican colloquial expressions) such as mae, pura vida, chiva and many others. I believe that learning some of the local language is a part of integrating into the culture and for that reason I am going to introduce you to some of the expressions I’ve picked up during my stay here. For those of you who are planning to study abroad here, you will be the coolest gringo in town if you already have a grip on some of these words and phrases, so take notes.

Pura Vida (purr-ah vee-dah), which directly translates to “pure life”, is not only the way of life and national symbol for Costa Ricans, but it is also a phrase that can be used in almost any form: a greeting, response, and even a departure. You will be amazed by how many times pura vida can be used in one conversation. Even though tacky T-shirts and all souvenirs alike are littered with Pura Vida, I have come to realize that it is more than just a ubiquitous phrase, it reflects the relaxed and peaceful lifestyle of the Costa Ricans. 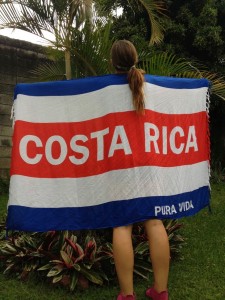 Chiva (chee-vah) is another word for “cool” used by many teenage ticos. The phrase ¡Que chiva! is also very common which means “how cool or neat”.

Mae (my) is used like “dude” or “man” between friends but can be used to refer to any person; for example, habia un mae en la calle (there was a guy in the street). This is extremely common among younger males in Costa Rica. I swear sometimes every other word out of their mouthes is “mae” this “mae” that.

Tuanis (too-ahn-ees) is said to be the Spanish adaption of “too nice” and it means “cool”.This word is very commonly used among the younger population and can also be seen on a lot of T-shirts (like the one I bought pictured below!). 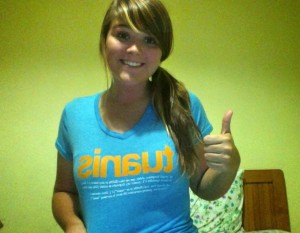 Macha (mah-cha) is a blonde female or foreigner. This word is commonly used by taxi drivers or guys on their “motos” calling out to us on the streets. They are trying to get your attention and they usually follow up with other piropos (catcalls).

¿Al chile? (All-chee-lay) means “Seriously?” which is the tico adaption of ¿En serio?

(Es un) queque (kay-kay)is the Spanish equivalent of the phrase “its a piece of cake” or if something is easy it is considered queque.

Pachuco (pah-choo-ko) is the name of the street slang in Costa Rica but can also be a person who has poor manners or uses socially unacceptable customs.

Pachuquismos (pah-choo-keez-mo) are the slang words or phrases commonly used but not limited among younger ticos, whereas “tiquismos” are Costa Rican expressions used by almost any tico or tica. Many pachuquismos you wouldn’t say in front of your grandmother yet some people consider it to be the second language of Costa Rica.


Emily Franks is the Fall 2013 CEA MOJO in San José, Costa Rica. She is currently a junior at DePaul University. Read more about our CEA Content Creators.
Leave a comment
Newest on top Oldest on top
Load more comments
Thank you for the comment! Your comment must be approved first