Exploring My Jewish Faith In Barcelona

December 16, 2013
by CEA Content Creator
SHARE SHARE
Sheer Edelman, a freshman from De Anza College, California shares her personal spiritual journey while studying abroad in Barcleona, Spain.
To be honest, one of my personal goals for studying in Spain was to draw closer to my religion and strengthen my sense of identity. I wanted to challenge myself to practice Judaism despite the more resistant environment and the fact that I was away from home. And now, looking back at my invaluable experiences throughout these three months, I feel that I have realized-perhaps even exceeded- my expectations. Studying in Spain proved to be an incredibly enriching experience that allowed me to connect to my Jewish roots by absorbing the land’s history, visiting different Jewish communities, practicing my religion in a deeper way, and most importantly- become an active part of the local Jewish community.
I was never too involved in my local Jewish community back home. I would go to synagogue about once a month and participate in some of their events, but I never felt like that community was my family. Here in Barcelona it was a completely different experience! Since this was my first time away from home, this Jewish community was all I had; it was the only connection I had to my religion and my home. And so for the first time I felt like I was part of a community, and this community became my Jewish family abroad. I tried my best to go to synagogue every week, and I spent every holiday and almost every Sabbath with them. We would pray together, eat together, celebrate together, and inspire each other. I slowly became accustomed to this community’s style of prayer and got to know many of the locals who came every week. They were all very open, warm, and welcoming. Women would greet me with a kiss on each cheek even if they didn’t know me. One elderly woman I had just met even invited me to sleep at her apartment the night of Yom Kippur- a holy day where one fasts and prays- so I wouldn’t have to walk all the way to my apartment and back on a fast day!
I also met people who really inspired me to strengthen my own faith. During one of the holidays, I met a woman of about fifty years old who grew up catholic, but recently left her religion and became a practicing Jew because she was drawn to the religion and felt Jewish inside. It made me think of the thousands of descendants of Jews who had stayed in Spain and were forced to convert in the Middle Ages. It was so inspiring to learn that although she couldn’t convert, she made the effort to come to synagogue every Saturday and celebrate the holidays together with the Jewish community. “How much more so,” I thought to myself, “as someone who grew up Jewish, should I be making the effort to come!”
This was my first time celebrating the Jewish holidays away from home and although I couldn’t help thinking of my family each time a holiday rolled around, being involved in the local Jewish community helped alleviate any feelings of home-sickness. However, the first night of Chanukah* was the first time I didn’t have the Jewish community to celebrate with (the community events were saved for the weekend), and it was the first time I felt a deep longing to be with my family. Since we always celebrated the first night of Chanukah with family and friends- lighting the candles together, eating, chatting, and singing in front of the flickering lights- the thought of celebrating it alone was unbearable. I decided that I wanted to share my traditions with my homestay family. That night, we all crowded around my little transportable menorah in their small dining room as I explained the story of Chanukah and elaborated on the deeper significance of the candles. I said three short blessings and then sang a prayer as I lit one candle for the first night. My home-stay mother, brother, and sister listened respectfully and watched me with curious eyes. I felt so grateful for having such an accepting family! It meant a lot to me to be able to share my traditions with them. 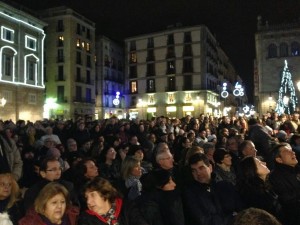 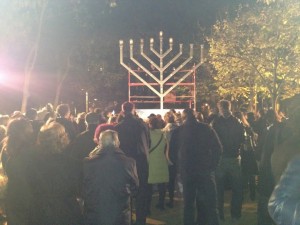 After that night, I didn’t feel lonely anymore. I would light candles with my homestay family during the weekdays, and on the weekend I attended the public menorah lightings. These public lightings take place all over the world to inspire both Jews and non-Jews to fight darkness by “lighting up the world” with good actions. Inspired by this message, I wanted to share the light of Chanukah with other CEA students. On Monday night- the sixth night of Chanukah- I went over to the apartment of CEA students Jenna Radin and Alana Kutinsky to make potato pancakes called “latkes”, which are a traditional food for this holiday. We peeled and grated the potatoes, mixed them with eggs, added some spices, and fried the pancakes in oil. Though it was our first time making them, it turned out quite a success! We set the table, lit the candles, and enjoyed some crunchy latkes together with everyone :) 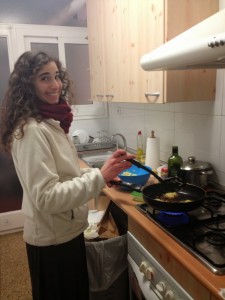