November 28, 2013
by CEA Content Creator
SHARE SHARE
As of November 20th, I officially only have one month left in Sevilla! It's hard to believe that I've been living here for almost three months because Sevilla definitely has become a home away from home. So, since I have become more of a "local" in Sevilla, I thought it might be fun to share some of the foods that I have discovered and enjoyed here.
Food 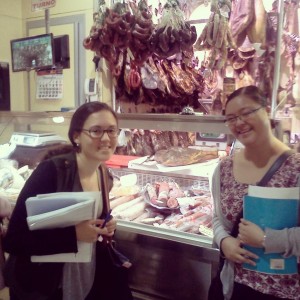 Jamón: I think ham is one of Spain's most prized foods, especially in Sevilla. From day one in my Food & Wine class, I knew that ham was the meat of choice for Spaniards. It comes in all shapes and sizes, ranging from little fat to more than plenty amounts of fat. For anyone who is planning to come to Spain, I will share the "secret" of the best ham to eat here: it's called jamón ibérico de bellota, which means Iberian ham (of acorns, which refers to the Iberian pigs' diet). 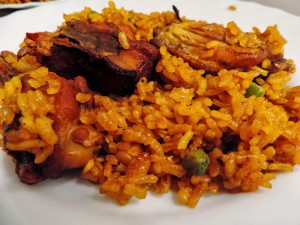 Paella: I think that this is one of the most well-known Spanish dishes (although I must admit, I did not hear about it until I was already on the plane and on my way to Spain). A common misunderstanding is that this rice dish is from Andalusia (southern Spain); however, paella actually originally comes from Valencia (eastern Spain).

During the dictatorship of Franco, the goal was to unify Spain - so, Franco created an idealized and "unified" version of Spain in which Castilian Spanish was the "official" language of Spain, flamenco and bullfighting were popular Spanish traditions, and paella was a common Spanish dish. While these are still true (Castilian is still one of the official languages of Spain), they have been preserved now because it is the average tourist's expectations of Spanish culture (even though not every region speaks Castilian Spanish, flamenco is from southern Spain, and paella is from Valencia). 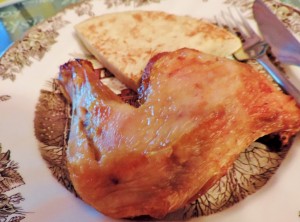 Tortilla de Patatas: Okay, so chicken isn't much of a surprise or very different from "American" chicken, but the Spanish omelette is definitely a common Spanish dish. It's a fairly simple recipe and I think it's delicious (although I wouldn't eat it every day). It is essentially an egg and potato omelette, and it's especially good if you pair it with some type of salsa (sauce) to add some more flavor. I have also seen bocadillos de tortilla de patatas, which is a Spanish omelette sandwich - I haven't actually tried it though, because it just seems like too much potatoes and bread in one sitting. 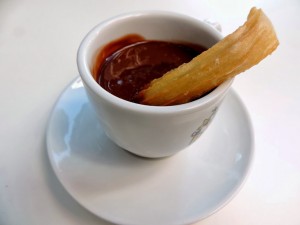 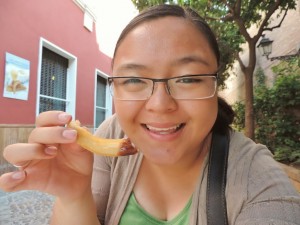 Churros con Chocolate: Yum. So, these churros are different than any I have tried in the U.S., because they are not coated in cinnamon sugar, but rather they are plain pieces of fried dough. But, dip them in rich, thick, warm chocolate, and you've got yourself a delicious... breakfast! Yeah, I was kind of surprised to learn that this is something that is more commonly eaten for breakfast. Personally, I'll stick to eating them at my self-declared snack time. Oh, and one serving of these should last you the rest of your life - it's that rich and delicious.
Tapas 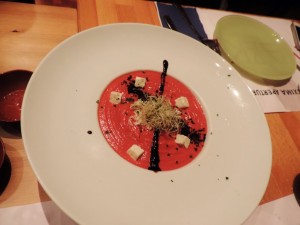 Salmorejo: Although I personally am not a fan of tomato soup, I thought that I should give salmorejo a try, because how often are you in Spain? Like gazpacho, it is essentially a cold tomato soup, but this one is actually thicker. One spoonful of it was enough for me, because it was so creamy, thick, and tomato-y, but if you are a fan of tomato soup, I would recommend this dish! (But maybe get a tapa - ie, smaller - version of it; we shared this entire bowl among 8 of us or so.)
Espinacas con Garbanzos: Unfortunately, I do not have a picture of this one, but it is my absolutely favorite tapa! It is cooked spinach with garbanzo beans - and it is quite delicious! I have also heard it is very simple and easy to make at home - healthy, too! 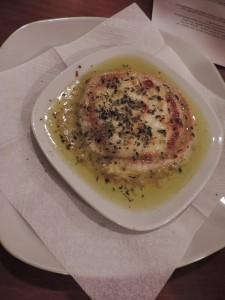 Queso de Cabra: Ooh, this is another one of my favorite tapas! Warm goat cheese served with crackers or little pieces of toast - it's kind of addictive...
Drinks 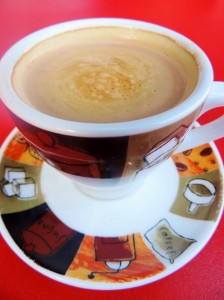 Café: Coffee! Not only is it popular in the States, but surprise, surprise, it is a very popular drink in Spain, too! There are many different types of coffee drinks here, but I will just explain a few of them. As mentioned in the picture above, café con leche is equal part coffee and milk (and it's my favorite coffee drink here). On the other hand, there is also café manchado, which is mostly coffee with a little "stain" of milk (perfect for anyone who prefers only a little milk with their coffee!). I have also heard (but not personally tried), that there is leche manchada, which is mostly milk with a little "stain" of coffee (so, I've been told it's more like "coffee-flavored milk" than coffee...). 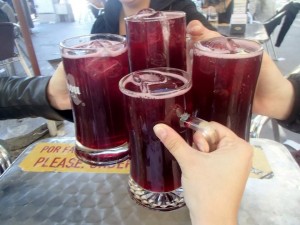 Tinto de Verano con Limón: Of course, wine is also a very common drink here in Spain. Now, I personally am not much of a wine drinker, but I must say that this drink has definitely caught my fancy. This is basically red wine mixed with Sprite or 7-Up and a slice of lemon. The name is tinto de verano, which means "summer wine," so I would guess that this is more of a summer drink, as it is served with ice and is quite refreshing. Be careful with these, though - they kind of sneak up on you, since it's harder to taste the wine and you don't necessarily realize how much you are actually drinking.
Miscellaneous Finds 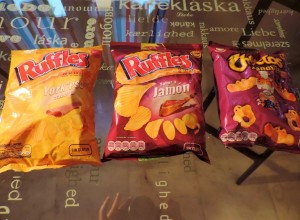 York Queso, Jamón, and Ghost-Shaped Chips: So I know this isn't exactly typical Spanish cuisine, but I thought this would be fun to share anyways. The bag on the left is "york queso," which I later discovered is a type of ham and cheese sandwich. Honestly, these chips just tasted like some type of cheese... The middle bag is "ham-flavored"! Kind of weird. But strangely, they tasted kind of good. At first, I thought they were just extra salty chips (have I mentioned yet that Spaniards put salt in everything?!), but then there's a subtle jamón aftertaste! And lastly, the ghost-shaped Cheetos, which did not really taste like Cheetos. But they were fun to eat! 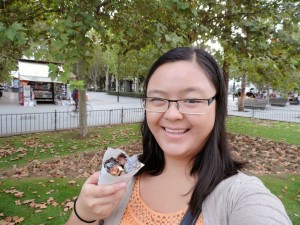 Castañas: Aw, these made me feel like it's Christmastime. I definitely wasn't singing about "chestnuts roasting over an open fire," though... Who, me? But anyways, I don't think I've ever really had these, despite what the song says about eating them at Christmastime. They were warm and much sweeter than anticipated. The hardest part about eating them was breaking through the shell and the fuzz, but it was fun, too!

Cookie Monster Donut: And last but not least, the most Spanish of all foods... The Cookie Monster donut! Just kidding, it's not very Spanish - it's from Dunkin' Donuts. But, he's just so cute that I had to share! It's a donut made of blue-colored shredded coconut and icing/frosting - absolutely delicious, though it was a little sad to eat him...
Anyways, I think it's been pretty fun to try all different foods from (or not really from) Seville/Spain. Food is definitely a major part of the culture here, especially tapas, which as I mentioned before are smaller servings of yummy food that are commonly served with una cerveza (a beer) or un vino (wine). Here in Seville, particularly during the hot summer hours, most Spaniards spend their evenings at outdoor cafes, eating tapas and enjoying their friends' and family's company.
Joy Bullock is the Fall 2013 CEA MOJO in Seville, Spain. She is currently a senior at Seattle Pacific University.
Read more about our CEA Content Creators.
Leave a comment
Newest on top Oldest on top
Load more comments
Thank you for the comment! Your comment must be approved first