November 25, 2013
by CEA Content Creator
SHARE SHARE
Recoleta, Palermo, and La Boca are three different barrios in Buenos Aires that each have unique personalities. Here are some things to do at each of the locations! Enjoy!

I am going to talk a little bit more, in comparison to the other places in this post, about a popular show that a lot of students, myself included, have enjoyed called Fuerza Bruta. In English, this means Brute Force, and that is basically what the show entails. There are a bunch of mini acts combined to create the whole show. Each act has a style of its own coupled with eclectic dance, music, and interpretations. 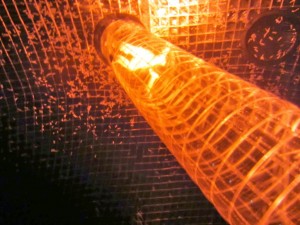 But back to the name; yes Brute Force, because the audience is a part of the show. The acts do not really take place on a stage but more so encompass the whole venue. You will get hit with sprays of water from the show and confetti will fall on you. Then, at the end of the show everyone will dance. And, that ya’ll is a sneak peak of why the show is called Fuerza Bruta.

This show is one of the most interesting shows I have been to, because I had never seen/experienced anything like it, and for the most part probably never will see or experience anything close to it again, unless I went back of course.

Getting there was fairly easy. You buy your tickets off of ticketek.com.ar (which is the website where you can buy tickets to pretty much anything). Next, you can go and pick up your tickets at a number of locations. The ticket price ranges depending on the day of the week but generally it is from $120-$160pesos. That is about $30 US dollars or less depending on exchange rates.

Fuerza Bruta is about 2 hours long and is located in Recoleta at the Recoleta Cultural Center (Centro Cultural Recoleta). 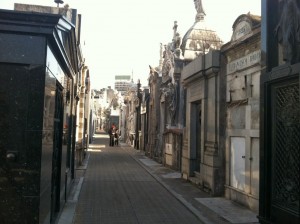 The cemetery in Recoleta is a very beautiful place. All the graves are above ground with intricate designs. It is a pretty big cemetery and good for a day time weekend stroll. I spend a couple hours here and only saw a portion of it. They also give tours here so you can learn the history about the famous, influential, wealthy, and intriguing people who are buried here. 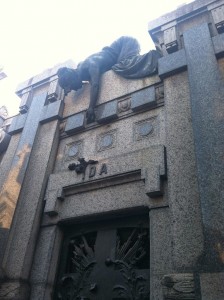 Palermo is one of Buenos Aires biggest barrios. Palermo Hollywood is where a lot of the nightlife is and Soho is known for its shops, fashion, and cool restaurants. A lot of students like living in Palermo, because there is a lot of stuff to do here. 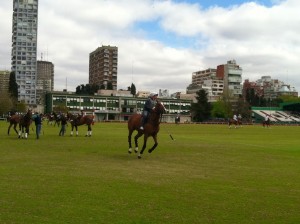 Also, in Palermo is the Polo stadium called Campo Argentino de Polo. If you search around you can find a free Polo match to go and see. That is what my friends and I did and we enjoyed it. I recommend doing this if you ,like us, no nothing about Polo and just want to go and check it out. 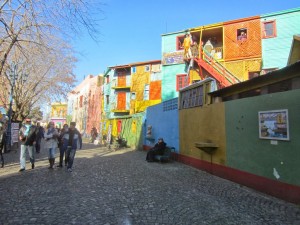 La Boca is known for its colorful architecture. The original buildings were made out of old ship paint and materials, which is how it got its distinctive look. This barrio is also where the Boca Junior soccer stadium is located at. It is a cool place to walk around and enjoy the interesting buildings.

Maya Sykes is the CEA Fall 2013 MOJO in Buenos Aires, Argentina. She is a junior at the University of Oklahoma.  Read more about our CEA Content Creators.
Leave a comment
Newest on top Oldest on top
Load more comments
Thank you for the comment! Your comment must be approved first