So far nobody that I know has ever been above homesickness when they've been away from their friends and family, and I experienced my first bout of it last week.

I go to college a mere two hours away from all of my immediate family, so being so far away from everybody I've ever known my whole life was something I knew would be hard. I was prepared to be insanely homesick, but despite having a yearning for my Dad's pasta sauce and my Grammy's baking, homesickness hasn't been too big of an issue; it's more that I wish that everyone could just be here with me to experience all of the greatness that Facebook pictures and the most vivid descriptions just can't quite capture.

Finding ways to relate my new home here in Alicante to Los Angeles has really helped with the transition. The beach was the magnet pulling me to choose Alicante; it is gorgeous and the sun is out everyday. 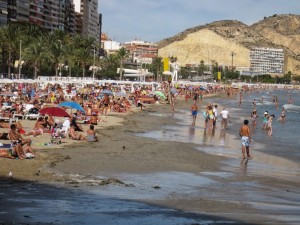 Although it is now October, people are still going to the beach and some of the harder- core beach- goers are still enjoying the chilly Mediterranean. I'm not much of a tanner, but I'm at the beach at home nearly everyday for volleyball. I've been playing for quite some time and although I play at my college at home, I'd never been so thankful that I play until I played my first game here at Playa Postiguet. At first I was definitely shy and nervous but like all Spaniards, they were easy- going, friendly and inviting. I have met so many locals, tourists, and other study abroad students from other countries through playing here and it has been a definite highlight of my trip so far.
Along the lines of meeting people, being active socially has personally helped me avoid homesickness a lot. There's no time to really get caught up in missing what you have at home when there is so much greatness in the present time that you're experiencing. Meeting Spaniards and other foreign students has been fairly easy for us in the CEA group, however, I do know people who haven't yet seized the opportunity to get acquainted with the locals here. It is more than understandable, but I highly highly highly encourage making the effort (I also encourage homestays, but that's a blog in itself)!

Anyone can sign up for a Spanish course in school, so for me, the point of studying abroad is mainly for cultural immersion. A huge part of cultural immersion for me was having to break out of my comfortable American bubble and become somewhat vulnerable to an unknown culture. Having to knowingly put myself into slightly uncomfortable situations where I was surrounded completely by Spanish, instead of just having an hour of class (which was "Spanglish" to start with), was painful and talking to my family on the phone in English was like music to my ears. Then things started to become familiar. So much was happening and so many new things started coming into my life that the unfamiliar, new situations had started to become normal. 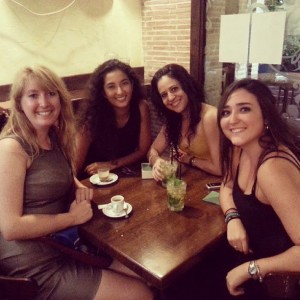 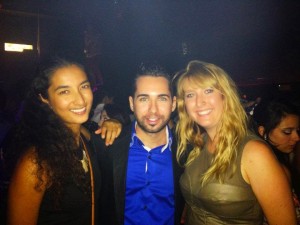 Just as awesome as meeting people from all over the world, is sometimes something so simple as feeling like you have a place where you can fit into somewhere familiar. Belonging to something comfortable and then being able to walk out your door to join Spanish friends has been an incredibly great experience.

My Dad at home is my rock, the person I got to when I need to talk and although we still talk at least twice a week, I have developed relationships here in a way that I haven't ever before. I'm more of a reserved person when it comes to putting my business out there, but when you are thousands of miles from home, having to trust people in a shorter amount of time becomes a lot more important, and I have developed awesome friendships with the CEA group that's here with me. 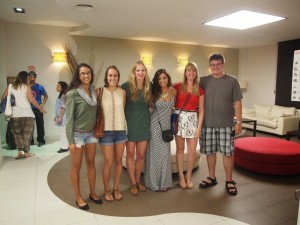 Keeping in contact with family has been very helpful, and the apps "Viber" and "WhatsApp" have so been the most reliable texting and calling apps that I've used (they work as long as you have a steady source of WiFi).
At first, the new experiences are no doubt going to be hard and overwhelming but then things are going to start to settle down, and you'll be wishing you could stay for even longer!!!
¡Hasta luego!
Kiana Fukuda is the Fall 2013 MOJO in Alicante, Spain. She is currently a sophomore at California State University, San Marcos.
Read more about our CEA Content Creators.
Leave a comment
Newest on top Oldest on top
Load more comments
Thank you for the comment! Your comment must be approved first