Rome-ing the Provence Region: Part I

November 08, 2013
by CEA Content Creator
SHARE SHARE
We took the same route that the Romans took 2,000 years ago. Asphalt had been slopped over the roads but the view was all rolling hills, cliffs, and rows of empty grape bushes that had been picked clean earlier in the year.

Our travel group was taking a weekend trip to the Provence region of France. Our chauffeur, Michel, drove us to the town of Arles first where we could explore the Saturday market. It was about two hours from Antibes and we were not disappointed.

One of my favorite things about Europe is the prevalence of markets that are full of fresh produce, baked goods, cheeses, preservatives, and pretty much anything you could want. Organic, locally grown and produced foods are usually only available at farmer's markets where I live and those are not an every day occurrence. Arles had one of the best markets I had been to since I arrived in France. It is more of a social even than a serious business venture. It's set along one of Arles' main streets, one side for foods and related goods while the other was for...well...pretty much everything else. I explored the food first, of course. I bought a baguette for €.60 and tried every free sample in combination with it, lingering at the cheese stand a little longer than the rest.

Across the street I perused the colorful clothes, bags, accessories, pottery, sunglasses, wooden boxes, ornaments, and everything else you could imagine. The sun was shining and for the first time in 2013, it felt like fall. 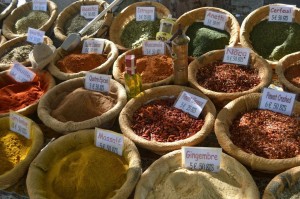 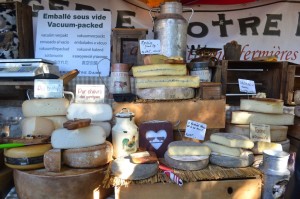 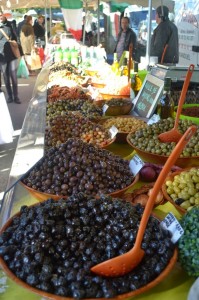 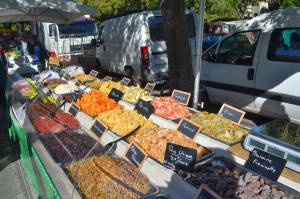 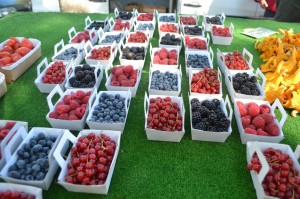 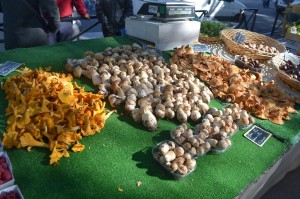 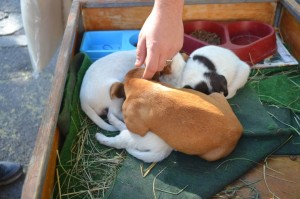 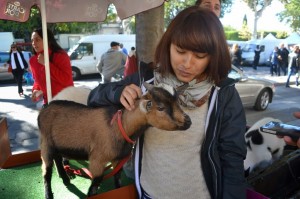 The Roman ruins were less lively than a marketplace but much more majestic and stately than anything we see in our modern world. I did not always appreciate historic monuments until I started thinking about how long they have survived in the world. While the technological advances we make are impressive in another way, I can't help but laugh about how easily and frequently we crack the screens of our iPhones. 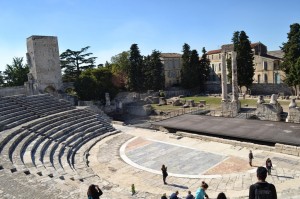 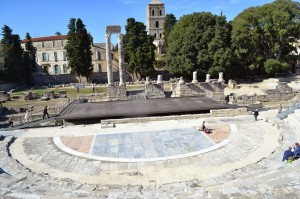 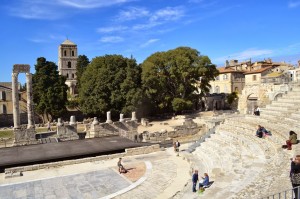 The same thoughts accompanied me to the Roman amphitheater. This stadium had been the focal point of savage, bloody entertainment. While no physical traces could be seen with out naked eyes it was easy to imagine gladiators battling out in these grandiose remains of the past. 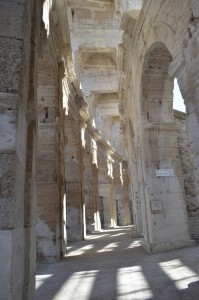 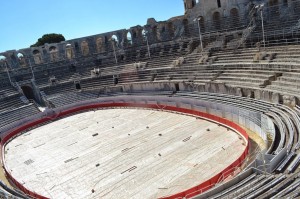 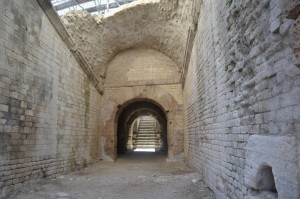 Arles was an important city to the impressionist painter Vincent Van Gogh, who was most productive during the time he spent here. From this point on, every picturesque moment I experienced in this town was just a testament to his fascination with it.

I loved being able to see what inspired one of my favorite paintings: Le Cafe de nuit.
Our last piece of history before retiring our Saturday was Les Baux de Provence. Sadly, my camera battery did not last through this excursion. Just one of the incidents that can occur during travel. But with so many cameras I still manage to have some pictures of myself exploring les Baux de Provence. As soon as we walked up the fort, the view was obviously spectacular and I walked - rather quickly - to the edge. Everything I see in France is elegantly beautiful but brushed with a coat of strength and command. This fort was the perfect replica of France for me. Set high on a plateau, one can't help but feel rather insignificant looking down at the surroundings of tiny houses , olive trees, and the Alps that are forever on the horizon. So much has happened in this spot long before we, our parents, or our grandparents were born. Down below we escaped the sun and wind into the quarry for a light show of famous paintings. Works were projected on the walls and floors of this huge cavern while music played. It would have been eerie had I not been in such awe. Chagall and Matisse were stretched across every wall. You couldn't stand in one place but you wouldn't be able to catch everything before it changed again even if you tried.
By the time we made our way to Avignon, I was exhausted. Dinner was delicious, filling, and wonderfully French. The three course meal was accompanied by wine and ended with a chocolate caramel mousse that I had no room to eat. After a brief walk and a drink at an Irish pub, it was off to bed for me. Tomorrow would be our second full day of exploring the Provence region.
Victoria Zawitkowski is the Fall 2013 CEA MOJO for the French Riviera. She is currently a junior at Virginia Commonwealth University.