November 06, 2013
by CEA MOJO
SHARE SHARE
Yet another four years have almost come to pass, which means that we are right around the corner from
the FIFA World Cup 2014!!!
I must confess, prior to attending this match, I would not have considered myself to be one of many dedicated, die-hard soccer fans.
However, just one amazing match later, I have transformed into a roaring, cheering onlooker, screaming in the same manner as those who have been fans since they were infants,
and I find myself already anticipating the finals taking place this coming June in Brazil! 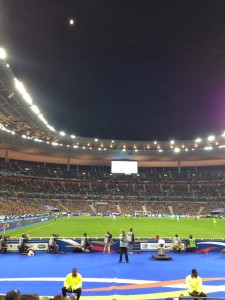 There is something so dramatic about walking into a stadium packed with loyal fans under a perfectly cool, clear night sky----the stadium lights illuminating every inch of Le Stade de France.
One can't help but become immersed in all the chaotic cheering and flag waving. 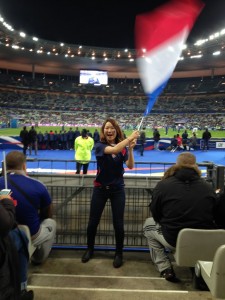 I am clearly no exception. 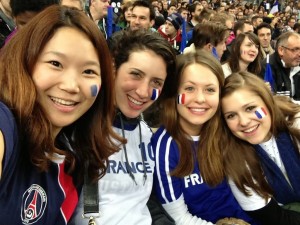 Like many a sports match, painting the face is a joyful ritual which, although seems like such a simple gesture, truly enhances the experience of really engaging yourself in another culture. 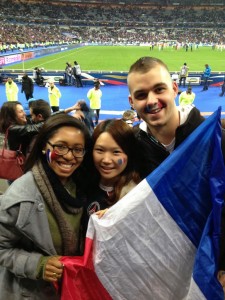 It also gives you a chance to break out of your artistic shell and paint not only flags on your cheek but perhaps,
the French flag as a mustache, as modeled by Mr.Cody Haupt above. 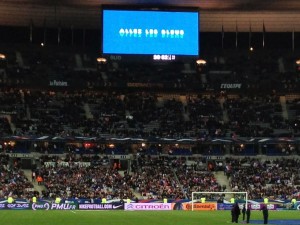 By the end of the match, I realized that you don't have to possess a natural liking to sports in order to enjoy, or even become a sports enthusiast. It's the atmosphere of the arena, the pride and devotion of the French (and even Finnish!) fans, and the extent to which you're able to interact with, and feel as though you're truly part of a larger entity of such loyal citizens.
Upon my arrival to Paris, one of the largest differences I saw between the European and American culture was America's lack thereof, precisely because of what our history teachers had perpetually taught us over and over again----
America is a huge, melting pot.
On the contrary, European countries such as France, have a more defined outline of their cultural ways.
This had led me to believe that it would be far more difficult to feel integrated into the French culture.
However, after seeing a representation of France's own melting pot from within the crowd of blue,white and red painted faces, it's clear to see that the unity of a nation doesn't have to come from the blatant stereotypes of physical appearances or perfecting the cultural mannerisms----
but rather from the flexibility of your mind and the position of your heart for a country.
Allez Les Bleus!
Monica Park is the Fall 2013 MOJO in Paris, France. She is currently a senior at the University of Michigan, Ann Arbor.