The Five Senses of Morocco

Upon my arrival in Tangier, Morocco, my initial thought was, “This doesn't look like Africa.” But then I realized that my expectations of Africa were solely based on images I had seen in the media or things that I had heard from other people’s experiences in Africa. After attempting to disregard any preconceptions I had about Morocco, or Africa in general, I tried to allow myself to observe and learn as much of the culture as I could.

This is where the Mediterranean meets the Atlantic Ocean.


I found that Tangier did not appear too different from Seville with the exception that women were pretty much fully clothed from head to toe and some of the men were dressed in traditional Moroccan garb. 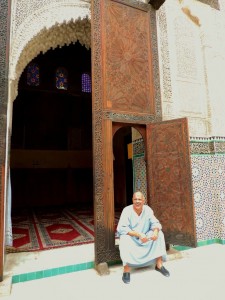 Our tour guide Tahmi, dressed in a kaftan, a traditional Islamic robe.


However, as we disembarked from the bus at our first major stop in Meknes, I became overwhelmed with the amount of sights, smells, and sounds of Morocco. To attempt to describe everything I observed, felt, and experienced would take much longer than a simple blog post. So, I thought I would take you through a brief walk-through of the “five senses of Morocco” that I experienced in the few short days that I spent there.
Sounds
One of the things that our tour guide first told us when we were on the bus in Morocco was that most people there spoke multiple languages, including: Arabic, French, Spanish, English, and possibly even Italian. 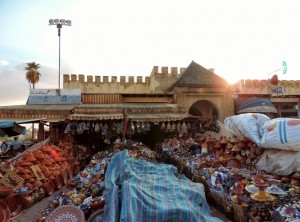 As we walked through the market in Meknes, I found that there were so many different sounds to take in: different languages being spoken, people having everyday conversations, vendors shouting to get your attention, animals, cars, children playing in the streets, music permeating the air, etc. My senses were on overload, especially after hours of traveling at early hours in the morning, but I actually enjoyed listening to the different sounds of Morocco.

Touch (Feel)
While I didn't go around Morocco touching everything in sight, it was still interesting to compare the way the streets felt under your feet to the way it felt when riding on the bus. The main highways were paved, but for the most part, we tended to be in the center of the cities we visited, which meant we were walking on broken cobblestone or simply a dirt road with rocks and bumps and all. Our bus ride back to Tangier was also very windy and bumpy, which meant many people (myself included) felt a little carsick. 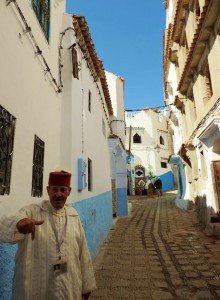 Our tour guide in Chefchaouen. Notice the street behind him is made of stones. It's not the smoothest pathway!

Also, we visited a cloth factory in the Old Town of Fez and they showed us how to wrap a traditional turban around our heads. This is me, Joy (the author).

I knew that Morocco is an Islamic country, but it was actually pretty cool to visit after learning more about the history of Seville and the Arabic/Islamic influences that existed there, too. One of the main attractions of Seville is the Cathedral (world’s third largest Catholic cathedral) and La Giralda, the bell tower right next to it.

As you can see from the two pictures, the bell tower/minaret in Seville is very similar to the minaret in Morocco. The one in Seville stands there today as a remnant of Islamic influences from the 12th century (a mosque used to stand right where the cathedral is today in Seville). A minaret is located right next to the mosque and is used to call Muslims to prayer five times a day.

The smells were strongest when we walked through the market in the oldest part of Fez, dating back from the 9th and 10th centuries. I think I could smell every type of smell that a person could think of: a mixture of spices, warm bread baking, smoke from cigarettes, tangy smells, sweet smells, bad smells, good smells. It was quite overwhelming for my nose, actually. At any given moment, you didn't really know what you were going to smell.

At one point, we visited the oldest tannery (leather factory) in Morocco – and it smelled awful. We thought that our tour guide was joking when he said they were going to give us “gas masks.” Turns out he was only half joking, as they handed us fresh mint leaves to help mask the smell of the tannery. It was all worth it, though, because after the tour, we saw the finished products, which were absolutely gorgeous!

Mint leaves to help mask the smell of the tannery

Of course, we tried some delicious food while we were in Morocco! One night, we went to a dinner and a show, where I tried many types of Moroccan foods. 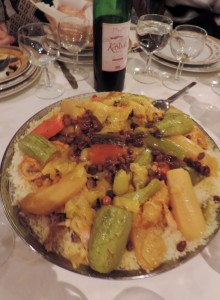 Cous cous with chicken, lentils, and lots of yummy veggies! 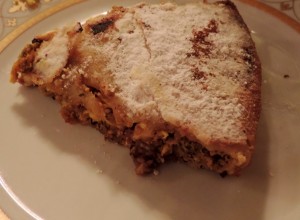 Pastilla - a Moroccan dish that is both sweet and savory. It has crushed nuts, cinnamon, sugar, shredded chicken, and other spices. Each bite you take is unexpected - it could be entirely sweet, entirely savory, or a mix of both. I really enjoyed trying it.

Joy Bullock is the Fall 2013 CEA MOJO in Seville, Spain. She is currently a senior at Seattle Pacific University.