When Life Doesn’t Give you Limón...Go to Jacó!

October 14, 2013
by CEA Content Creator
SHARE SHARE
Hello readers! I am so excited to be making my first post while in San José, Costa Rica! It has been a great week of adjusting to my new surroundings, making friends, starting classes, and especially brushing up on my español!

You may not be aware of the climate in Costa Rica this time of year, but it is their “low season”, also known as the rainy season. I’ve tried to not let the rainy and gloomy afternoons bring me down, but I was certainly looking forward for our first excursion to Puerto Viejo, located in the province of Limón on the coast of the Caribbean. I packed my swimsuit and sunscreen in preparation of a weekend of sunbathing, snorkeling, and swimming. Unfortunately there was a roadblock in my highly anticipated excursion.

Due to the excessive rain, the route to the Caribbean experienced a landslide and we were unable to drive there, causing us to postpone this excursion. My type A personality immediately took over and my inner sun-worshiper was in a frenzy. Where were we going to go this weekend instead?! Luckily there were a couple of guys in the early start program that suggested we go to Jacó, a beach town two hours away by bus. Since we already had our bags packed we immediately went to the bus station and headed onward to Jacó!

I had heard about Jacó from a friend before I arrived to Costa Rica and I have to say I was a bit skeptical about taking the trip. Jacó is known for prostitution, and drug activity with subpar beach. I pushed my skepticism aside and went with an open mind because “Pura Vida!” (Pura vida meaning “pure life”, Costa Rica’s motto and lifestyle...which has become the new “YOLO” for us gringos). 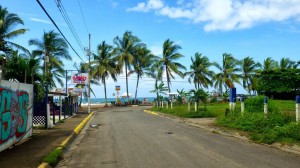 To my surprise we were able to find an amazing hostel located about a minute away from the beach! It was surrounded by palm trees, hammocks, plenty of surfer dudes, and fellow travelers. Not to mention it only costed $12 a night. That night we enjoyed some fresh fish tacos and went out to a club for drinks and dancing. The next morning I was awoken by the sun streaming through my window and the sounds of the surfer guests getting ready to hit the waves. We ate a quick breakfast and headed to the beach! Despite the dark rocky sand, the beach was very enjoyable. We spent hours playing in the waves, passing around a football and sunbathing. I was in heaven. 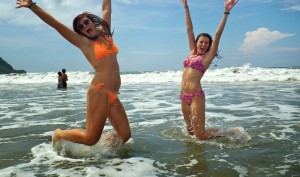 Later in the afternoon the girls went to a surf competition in Playa Hermosa, located a few minutes away by taxi. The view was breathtaking and not to mention the talent of the competing surfers. I think I fell in love with this country while watching the sunset and sipping on a piña colada with my new friends. I was truly at peace and experiencing the “Pura Vida” lifestyle. 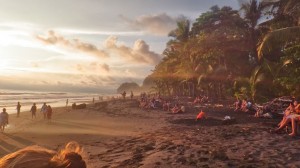 The rest of our weekend consisted of hitting up the local bars and clubs, dining at sodas (Costa Rican versions of ma & pop restaurants), lounging on hammocks, spending time at the beach, and most importantly getting to know each other. I left Jacó completely amazed by how I could get so close to a group of people within only a matter of a week. It makes me look forward to the next 11 weeks that I get to spend with such an incredible and down to earth group of people.

Emily Franks is the Fall 2013 CEA MOJO in San José, Costa Rica. She is currently a junior at DePaul University in Chicago, IL.
Read more about our CEA Content Creators.
Leave a comment
Newest on top Oldest on top
Load more comments
Thank you for the comment! Your comment must be approved first