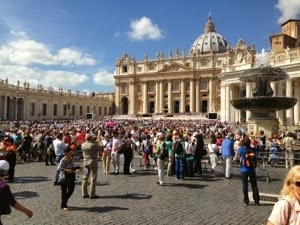 Recently, we have been learning about the apostolic foundations of the Church and the New Testament. The Gospels that we have been studying these past weeks all have their roots in the preaching of the apostles. Their witness, oral testimonies, and martyrdoms are the earliest legacy of the Church we know today. And studying in Rome gives us the chance to get to know the two “chief apostles”, Peter and Paul, in a special way. 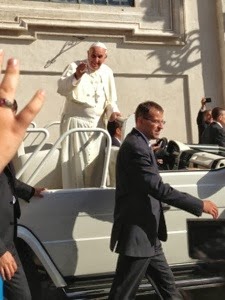 One of the earliest titles for the Bishop of Rome is “the successor of Peter and Paul”. This early title is a concrete expression of the spiritual presence of these two apostles who “founded” the Church at Rome by the word of their testimony and the shedding of their blood. The current successor to Peter and Paul, is, of course, the beloved Pope Francis. All sorts of attendance records at papal events have been broken through his popularity – especially among the Italians themselves. His direct, simple, language and down-to-earth gestures and examples have inspired tens of thousands to flock to his Wednesday Audiences, Sunday Angelus, and other outdoor functions. 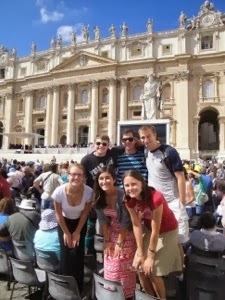 Last week, a delegation of Providence College students were among the huge crowd for the Wednesday Audience.

Attending a Wednesday Audience is a very unique experience. Although open to all, you do need a ticket if you want a seat. Tickets are free, but you must show up very early to get inside the Square since it’s open seating. The Audience begins with the Pope riding in his “Popemobile” around the Square to be close to the people. Pope Francis has the custom of making several passes through the Square so that as many people as possible can see him up close. Our P.C. delegation got up early so that they could get seats near the aisle where his Popemobile would pass. 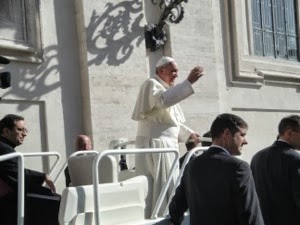 The Audience consists of prayers, Bible readings, a short talk by the Pope, and then greetings and blessings to all who are present, in several languages. At the final Blessing, the Pope also blesses any medals, rosaries, or other mementos that those present have brought for his Blessing. 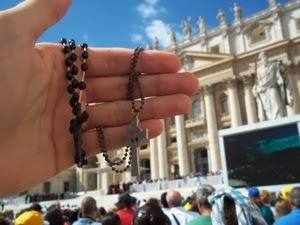 Here are some their reflections and impressions:

“It was amazing that we were able to attend the Papal Audience this week. We knew we wanted barrier seats, so we could be close to the Pope when he came around, and that we did- in addition to being in the 7th row. Seeing him and hearing what he had to say was not only relatable, but inspiring. I find it very fitting that Pope Benedict XVI declared the “Year of Faith” before he announced his retirement, and Pope Francis was definitely the right person to replace him, especially at the right time. His efforts to engage the world and welcome others back into the church have been inspirational, and hearing his words live from him make that very evident. It was amazing to see St. Peters Square packed with pilgrims, visitors, etc. to listen to him speak. The crowd was excited and lively, and it was great to see that much excitement over the Pope in person. It was truly an amazing experience.”

Joseph Day (’15) even delivered a letter to the Pope!

”St. Peter’s was filled with pilgrims from all over the world, all brimming with an excitement and joy that Pope Francis mirrored. He was all smiles as he waved to the crowds and kissed innumerable babies. We were right up against the barrier, just a few feet from him when he passed by. He looked at us and smiled at us. I was able to give, through a one of his guards, a letter that I’d written him. It was a moment of so much joy for us and for everyone there. It reminded me again of how the Church is a place of joy.” 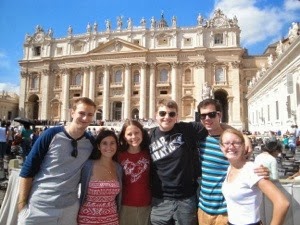 Dan Gagnon (’15) was impressed by the universality of the Church present:

“The Papal audience was one of the best experiences I’ve had since being in Rome. We arrived very early and got seats in the front corner of the audience so that we would be able to be close to the action. Hearing the priests translate the Pope’s speech into so many different languages was a definite reminder of how people came from so many countries just to be present there at St. Peter’s.”


Dr. Aurelie Hagstrom is currently serving as the Providence College Faculty Resident Director for the Providence College & Center for Theology & Religious Studies. You can find the original version of her blog post on the 'The Pope Francis Effect' blog here: http://blogs.providence.edu/rome/2013/09/24/the-pope-francis-effect/   Read more about our CEA Content Creators.
Leave a comment
Newest on top Oldest on top
Load more comments
Thank you for the comment! Your comment must be approved first