La Diada and the Human Chain

Walking around Barcelona on September 11th is the best way to understand the Catalan spirit. I was very excited to take a small group of students around important spots in the city such as the Cathedral, Plaça Sant Jaume and the Ciutadella Park so that they could experience the strong political movement for Independence from Spain up close. At first, from the looks on their faces, I could see that they did not know what to expect. In Catalonia, September 11th is not a day of grief but of celebration. 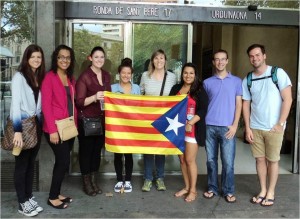 Every street was full of waving flags. Neither the rain nor the wind stopped the multitude. Five minutes left…four, three, two, one…until the clock ticked 17:14. At that moment we heard a clear and loud shout “Independència!” which was audible along the 400 kilometres of human chain through the Catalan territory. We all witnessed, first-hand, a historical moment for this nation. After that moment, the students asked me many questions like the importance of the year 1714, when Barcelona was besieged and defeated in the War of Succession. Also, they asked about the reluctance of the major part of Spain to let Catalunya be independent. It was interesting to leave my pride as a local aside and discuss these controversial topics. Moreover, they learned the origins of the anthem and the Catalan Independent Flag (la senyera), which is hung on many balconies in the students' neighbourhoods. I do not know if Catalunya will achieve Independence or not but it was a special experience for me to share this historical event with them.  - Alicia 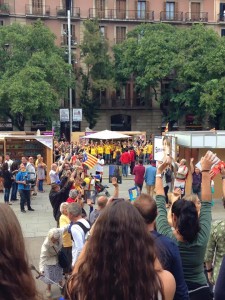 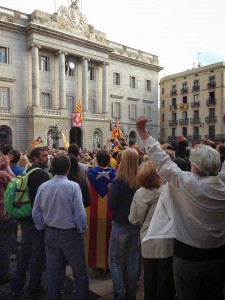 Before September 11th I didn’t know how strong Catalonian culture was. When I was applying to study abroad back in New York, other students told me that “Barcelona didn’t have a lot of culture and it was very Americanized.” After participating in La Diada, I now realize that was totally wrong. A few other students and I met up with Alicia and she took us through the Gothic Quarter with the Cathedral, the famous arch way with the gargoyles and Plaça Sant Jaume, an area I had never seen before and now love. She explained the various signs, history and significance behind La Diada, something I would have never grasped on my own as I do not know much Spanish or Catalan and have very little historical knowledge of the region. From what I saw it was a very peaceful demonstration and it was the first time I saw anything like that in person. I really liked the sense of pride that I saw displayed in various parts of the city like Ciutadella Park and Arc de Triomf. I had no idea that Catalonia wants to be its own country by next summer and that Catalans don’t like to be identified as Spanish. Being around so much national pride made me reflect on my background and how my perception has changed since I arrived in Barcelona. I was born and raised in New Jersey but my grandparents came from Italy, Portugal, Spain and Austria. I had implicit pride as an American but I didn’t understand how “different” I was until I came here and started absorbing another culture. I am so glad I decided to participate in this activity and look forward to learning more about the Catalan culture throughout this semester. - Adam 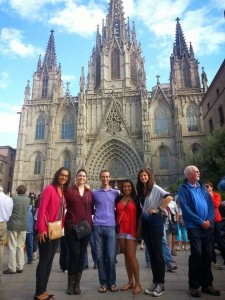