The 90 Day Border Hop: A CEA MOJOs Perspective on Crossing the Border

The majority of students who study in Costa Rica pass the ninety-day visa limitation during their stay. Since traveling here is inexpensive most students find the simplest solution to be hopping the border for a weekend. There are two obvious choices to renew your visa. You can travel north to the culturally rich country of Nicaragua or head south for the breath-taking beaches of Panama. Each choice holds unique treasures, and it’s a matter of personal preference.

Here are a few tips for making the ninety day border hop.

I personally decided to head north to Nicaragua; my itinerary included two nights in Leon Nicaragua and one night in Granada. After a nine hour bus ride to Managua and another hour and a half on a second microbus we arrived in Leon. Managua was not the safest of places, so I suggest you get to the bus station quickly and head to your next destination. It’s important to ask for the microbus terminal; they cost a few dollars and left every few minutes. In Leon, we grabbed a bicycle cab to The Bigfoot Hostel. This was an experience in its own right. 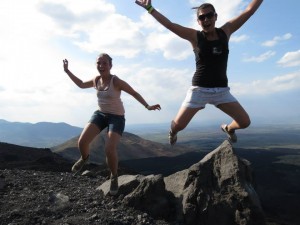 Bigfoot Hostel is known for the invention of volcano boarding. It was a stereo typical hostel with a laid-back vibe and numerous exciting travel stories to go around. It was only six dollars a night for dorm style living. With hostels be prepared to have purely basic amenities and some of the best traveling interactions you can get. After a night of exploring the beautiful city of Leon, we were ready for an adventure. A little under thirty people crammed into an open air converted military vehicle to head to one of the most active volcanoes in Central America. After a long hike up and enjoying the beautiful views we plunged down on our sleds. It was thrilling, but I will let the video do the talking for me. 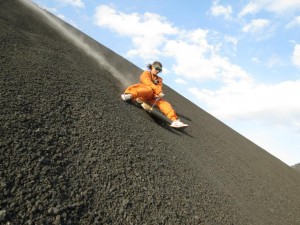 After another night at Big Foot, we caught an early bus to Granada. This city sits on Lake Nicaragua. It was full of impressive architecture and interesting artisan markets. We didn't have a hostel booked so it took a little searching. We eventually found a very decently priced place with a lot of fans in the dorms. This may sound silly, but it was nearly 100 degrees every day so you learn to appreciate the little things. A night of relaxing with fellow travelers rounded out our trip to Nicaragua. The next day was filled with ten hours of traveling back to San Jose.

Another example of the amazing architecture in Nicaragua. These buildings can be found everywhere in Granada and Leon

If you intend to do the ninety-day border hop just understand the challenges you might face and go with an open mind. Whether it is the sandy picturesque beaches of Panama or boarding down an active volcano in Nicaragua. Either choice holds its own experience.

The most important thing is to come in with no expectations because you may be pleasantly surprised by the things you never expect.


Lindsey Jolliffe the Spring 2013 CEA MOJO in San José, Costa Rica Read more about our CEA Content Creators.
Leave a comment
Newest on top Oldest on top
Load more comments
Thank you for the comment! Your comment must be approved first