A Place to Call Home in Barcelona 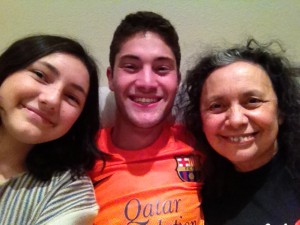 ¡Hola! My name is Todd Kovin, I'm from the Northwest Suburbs of Chicago, Illinois and I am a sophomore accounting major at Miami University in Oxford, Ohio. I chose to live with a host family during my semester abroad in Barcelona for the following reasons – friends who studied abroad recommended it, I wanted to improve my Spanish speaking ability, to be with locals who could answer my questions about where to eat and what to see and most importantly to have a place to call “home.” I'm a very adaptable, sincere, and clean person, so I knew I would get along with whomever I was placed. Although I was very excited to live with a family, I wasn’t completely confident in my Spanish proficiency. I had only taken a couple of years in high school and my second semester as a freshman in college.

I live with my host mom Norma and my 15-year-old host sister Jazmin. Norma works as a social integrator and speaks Spanish, French and English. Jazmin goes to school and loves movies, books and swimming. She can speak Spanish, Catalan, Italian and English. Being from America I think it is impressive to speak two languages, let alone four. Although they speak English, we keep it to a minimum because they want me to learn and improve my Spanish. I only use English when I forget the Spanish word for what I am trying to say. They are very good about making sure I understand what they are saying and asking so my concern about my level of Spanish fluency ended up not being a problem. One of the best parts of being a homestay student is that all of my meals are included. I am very open to trying new food but I do have two limitations which are no ketchup and no mayonnaise, which my family has fully respected. The food is amazing and everything Norma cooks is delicious. There are very few things that beat great, home-cooked meals.

During the first couple of weeks in Barcelona, I did something with Norma that I would have never done in a million years. I was walking home from class and I saw her right outside the metro stop. She said she was on her way to an event and asked if I wanted to come. At this point in the conversation, I was very confused. Of course I said yes, because I did not want to be rude. We got on the metro and she started explaining in more detail where we were going. I slowly started to piece together that we were going to a concert. Meanwhile, I still had my backpack from classes, and it was 8 pm. I hadn't eaten dinner yet, so I was starving. She gave me my ticket when we arrived at the Palau de la Música, a beautiful concert hall that was declared a UNESCO World Heritage Site. I found out that it was a classical music concert. Nothing against classical music, but I would never purposely go to a concert where it was playing. There was a female pianist, a male viola player, and a male cello player. They were amazing. The music they were playing happened to be famous Catalan music. As I am not from here, I didn't know that at first, but I had never heard anything like it. I was extremely happy that I said yes because I was able to experience something that I wouldn’t have ever done on my own.

When I tell other students that I'm living with a host-family, their first reaction is, "Wow, that's really cool. I'm so jealous. I wish I had done that." I'm not even exaggerating. I laugh at it a little bit because they had the exact same opportunity I did during the sign up period. My Spanish has improved immensely and I understand it to a good degree. I am able to have fluent conversations with every Spanish speaking person I talk to. If you want to become fluent, it is definitely possible, but you have to work hard. I'm sure it will benefit me in the long-run and maybe give me opportunities to work internationally.

I couldn't be happier that I chose to live with a host family – this has easily been the best decision I've made in coming to Barcelona. After the first couple weeks, I started to feel really comfortable. That's what it should be. You're living with a host FAMILY. Although you aren't at home, it is a very homey feeling. I can't thank them enough for making me feel like a part of the family. I highly recommend this option to anyone who wants to be immersed in the culture and have people to go to for anything you need. Read more about our CEA Content Creators.
Leave a comment
Newest on top Oldest on top
Load more comments
Thank you for the comment! Your comment must be approved first