December 28, 2012
by CEA Content Creator
SHARE SHARE
While studying abroad in Paris, I joined a soccer team called WISP (Women’s International Soccer Paris), and in order to play on their team for a 5v5 competition, I needed to obtain a doctor’s certificate for competitive soccer. The WISP captain told me that the team sometimes ran races together, so I should also receive a medical certificate for competitive running.
A couple of days after I acquired the medical note, there was a 5k (about 3 miles) and 10k (6.2 miles) race for breast cancer happening that weekend. Some of my teammates were going to run the 5k, and I decided to join. After the race, however, I felt inspired by my captain, who has run many marathons, to run a 10k since I’ve never run more than five kilometers before. She told me about the Corrida de Noel Santa Claus race that happened to be the Sunday just before I left Paris, so I had to do it.
I began training and felt rather successful first running six kilometers, then seven, then eight, and I even ran ten a couple of times. My favorite run started from my home, to Nation, to Porte de Vincennes, to Chateau de Vincennes and a little through Parc Floral, and then back home. The first half was always difficult, but the way home was a breeze.
I felt confident enough to run the Santa Claus 10k, and when December 16, 2012 finally rolled around, I was anxious but excited. I arrived at the event which was out in Issy-Les-Moulineaux, and I saw millions of Santa Clauses. This picture was during the warm-up just before the race. Everyone was dancing and following along to the people on stage. 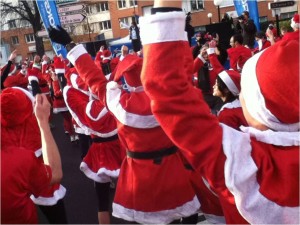 Although this was Santa Claus-themed, there were other costumes as well:
Some pirates… 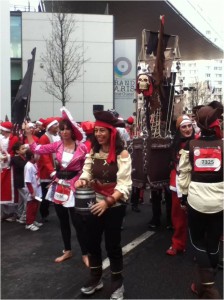 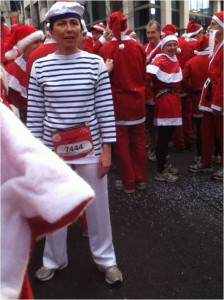 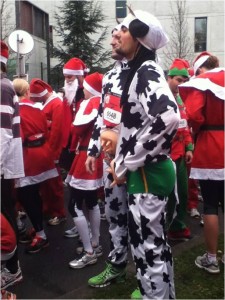 The race was difficult especially because I had to climb a humongous hill, twice. It was terrible, but I enjoyed the entirety of the race and completed my very first 10k in an hour. At the finish, I received a medal, along with refreshments with all the runners.

Although I struggled on some of the tougher parts during this race, I would definitely run it again and encourage anyone to run while living in Paris. It can be difficult sometimes with all the people and crowded streets, but I discovered new places that I probably wouldn't have seen otherwise and gained a better sense of direction in Paris. I no longer felt like Paris was a large, unknown city, but an adventure for me to explore.
I felt comfortable, like I was home.

Tara Maher is a student at California Polytechnic State University - San Luis Obispo. She just completed her Fall 2012 semester at CEA Paris.
Read more about our CEA Content Creators.
Leave a comment
Newest on top Oldest on top
Load more comments
Thank you for the comment! Your comment must be approved first