"Health for All" comes to CEA Paris

Students taking Communication & Global Competence at the CEA Global Campus in Paris were in for a rare treat last week.

Elon alumnus, Jack Dodson, along with faculty advisor Dr. Thomas Arcaro were in Paris to support Turkey's bid for the 2020 World Expo. Mr. Dodson, director of the documentary Health for All, had been invited by the Turkish delegation to show an excerpt of his 50-minute documentary given its resonance with that country's bid. 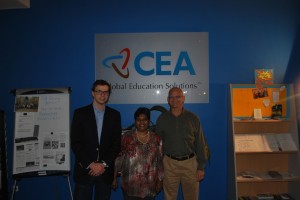 Jack's documentary grew from a project undertaken during his undergraduate studies at Elon University, under the auspices of the Periclean Scholars Program directed by Dr. Tom Arcaro.

Prior to arriving in Paris, Jack reached out to local schools in hopes of screening his film to new audiences - and students in the COM340 course were the first audience to do so. Following the screening students quizzed Mr. Dodson about his project and the cultural barriers he had to overcome to see it through. 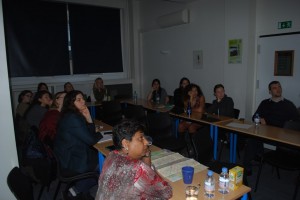 Check out this link for more information on Mr. Dodson's project: http://www.healthforallfilm.org/
The COM340 students had the added pleasure of speaking with Dr. Shobha Arole, Director of CRHP, one of the Indian healthcare providers highlighted in Mr. Dodson's documentary. Dr. Arole was also in Paris as part of Health for All's participation in the Turkish bid. She spoke to CEA students about healthcare in India and how CRHP serves as a pillar in providing and expanding healthcare access to Indians. 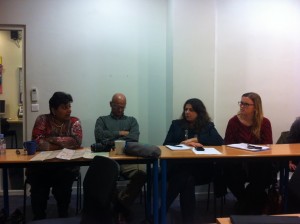 Many thanks to Jack Dodson, Dr. Thomas Arcaro and Dr. Shobha Arole for coming to CEA!