Becoming a casteller in Barcelona. 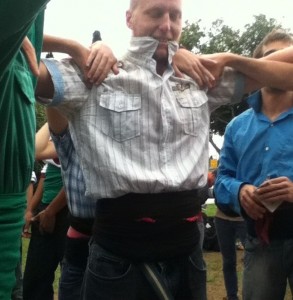 I wanted to study abroad in Barcelona to improve my Spanish and grow as a person. I knew that I would live with a host family and take Spanish classes but I never would have guessed that I would become part of a Castellers Colla (a Human Tower team). Castells is one of the most important cultural symbols of Catalunya and was declared an Intangible Cultural Heritage of Humanity by UNESCO in 2010. Human towers are formed by castellers standing on the shoulders of one another making several levels. Each group is identified by its colored shirt and traditional music is played before, during and after the performance.
I found out about my colla (team), the Arreplegats de la Zona Universitària, during an open-house of clubs at the Universitat Pompeu Fabra. Most colles in Catalunya are made up of people from all age groups (including small children); however my colla is exclusively university age students. We meet for two hours twice a week for practice. Given that the tradition of Castells is so important in Catalunya, I have learned a lot about the Catalan culture and people through my friends in las Arreplegats. The majority of people living in Barcelona are bilingual. In my colla, most of them speak Catalan as their first language and Spanish as their second (or as they call it, “Castellano”). My Spanish speaking ability has significantly improved through constant, forced Spanish-interactions with my fellow Castellers. They have also taught me about Catalunya’s oppression from the late dictator Franco, the extremely current issue of Catalunya attempting to separate from Spain, and even how Catalunya has revived itself since Franco’s fall from power in 1975. 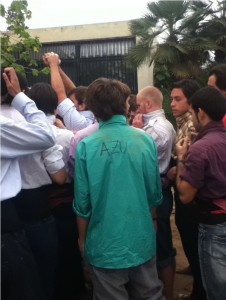 If I was speaking to a prospective student about getting involved with Castellers, I would tell them that if they are just looking for a way to spend a few hours with local students every week, this is NOT for them. If you want to do that, join an intercambio. Castellers is so much more. I grew to appreciate these people like a big family. I received help with Spanish homework and I have helped other people with their English more times than I can remember.
In the beginning of this semester, some serious personal issues occurred in my life and my friends in Castellers were there for me. Like I said, this semester has been one of the most difficult in all of college for me, but I have grown exponentially as a person and now have a wider world view of things. I have seen first-hand how globalization has changed the jamón (ham) industry, making it one of the most exported products in all of
Spain. I have eaten escargot and discovered I actually do like mushrooms cooked into my dinner. I have also discovered how 21 year old guys in Europe make jokes about the same things as 21 year old guys in the United States. I attribute all of these to my experiences in Castellers. 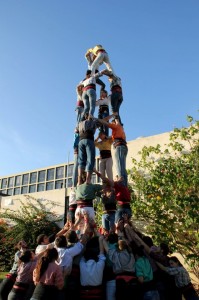 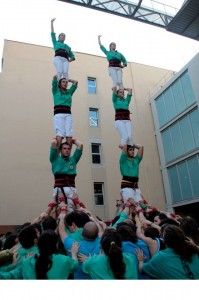