People are always telling me Prague is one of the most walkable cities in Europe and it's true- I've done about twice as much walking here as I do in Nashville, and I don't own a car in either location! If you're up for a hike, you can get to almost every tourist site on foot. If you only have a weekend, I'd recommend getting a tram pass and taking a few shortcuts, but my topic this week is a walking tour, so walk we shall!

This tour will hit three major locations: Josefov (Jewish District,) Old Town Square, and Charles Bridge/Lesser Town. According to Google Maps, it's 1.6 km or a little less than a mile, but remember that Prague has lots of twisty-turny streets. I may have looked like a complete tourist a few times, but my keychain compass has stopped me from getting totally lost. So put on your walking shoes and we'll start in Josefov.

The Jewish District of Prague is one of the best-preserved in Europe. The reason for this is that the Nazis wanted to save an area as a museum of the "soon-to-be-extinct" Jewish race, so when they found important Jewish artifacts around Europe, they brought them here. You could honestly spend all day in this neighborhood, with a single ticket that lets you into most of the synagogues (note: men may need to cover their heads or rent a 5kc (25 cent) yarmulke) and the Old Jewish Cemetery, the oldest surviving Jewish burial ground in Europe. Since in Jewish tradition, bodies are not to be disturbed once laid to rest; the newer corpses were buried in a layer on top of the older ones, and the older headstones were brought up to the new level. The result is a mishmash of gravestones from the 1600s onwards, including a few Jewish historical figures.

Take your pick of the synagogues- the ones covered by the joint ticket are Pinkas, which has a Holocaust memorial and exhibition of art drawn by children in concentration camps, Spanish Synagogue which has exhibits about Jewish history, and Klausen and Maisel synagogues, which also feature various exhibits. The only one that requires a separate entrance fee is the "Old-New Synagogue," where Rabbi Low's golem (see wikipedia for more information, it's not related to Gollum from Lord of the Rings) supposedly still lurks.

Once you're done there, head to Old Town Square. On the way you'll pass a statue of Kafka sitting on top of an empty suit. Unfortunately I can't explain that one. Old Town Square has some amazing churches and historical sites: if you go downstairs in the Old Town Hall, you can see what Prague looked like in the Middle Ages, in an excavated basement. The opposite direction, up the clock tower, is equally interesting. The view looks like this: 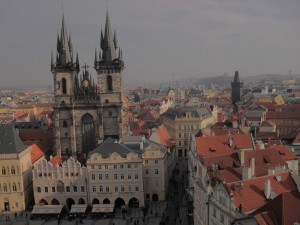 The big church here is the church of Tyn, where Tycho Brahe is buried. The square also has St. Nicholas' church, where a huge crystal chandelier gifted by a Tsar is displayed. Off to the right you can see the Powder Tower which has another lovely view, but you have to climb a precarious spiral staircase to get there. 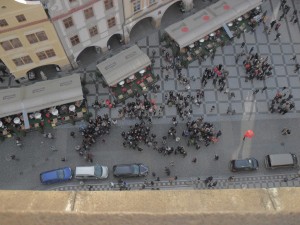 Don't look down! Or do. The ants, I mean people, here are gathering to see the astronomical clock. Every hour on the hour, the 12 apostles pop out, move around a little bit, and a golden rooster crows. And the crowd goes wild. The most fascinating thing about this for me is that it's been working for over 600 years with only a few part replacements or repairs.

After you've had your fill of Old Town Square, head across the Charles Bridge. Warning: it may take some navigating to get there, but it's worth it. The Charles Bridge is one of the most famous sites in Prague and it's fabulous. Unfortunately due to its fame and fabulous-ness, it's almost always packed with tourists, so the best times to see it are early in the morning or just after sunset. 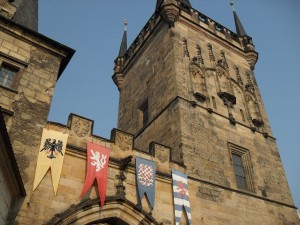 The Lesser Town end of the Charles Bridge, in semi-early-morning light. No Instagram necessary for great pictures here!

Just across the Charles Bridge, you find yourself in Lesser Town. This is where the CEA offices and Anglo-American University are located. Just around the corner from the bridge is the Lennon Wall. Sometime during the Communist occupation of Prague, someone snuck out at night and painted John Lennon's face on this wall. It became a symbol of free speech and love, and is now a legal site for graffiti, so there are layers and layers of paint. There will always be at least one Lennon face for photo opportunities, of course. 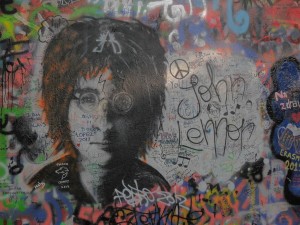 If you're tired, now's a good time to go a few blocks to the CEA Prague office, which conveniently enough is my topic for next week! See you then! Na shledanou for now!

Dorothy McQuaid is the CEA MOJO for Prague this Fall. Her mild-mannered alter ego is a senior Marketing major at Belmont University in Nashville, TN.
Read more about our CEA Content Creators.
Leave a comment
Newest on top Oldest on top
Load more comments
Thank you for the comment! Your comment must be approved first