Meeting the Consul General of the United States to Barcelona

November 02, 2012
by CEA Content Creator
SHARE SHARE
This week a group of CEA study abroad in Barcelona participants had the opportunity to meet with Tanya C. Anderson, Consul General of the United States to Barcelona, as part of the mentorship component of our Career Development Seminar.  Ms. Anderson spoke at length about her career in the Foreign Service, highlighting her work with cultural programs and media relations in Morocco and Egypt.   She went on to describe her posting to the Philippines, where she sought means of maximizing the impact of limited aid budgets in South East Asia by cooperating with other countries’ aid agencies.  She also spoke about her key role in ensuring the efficient coordination of reconstruction projects in Iraq and how her knowledge of Arabic enabled her to better understand the needs of the local population.
The Consul General’s talk shed light on different facets of diplomacy, from how the State Department depends directly on Congress for resources to fund its initiatives and the complex political interplay this implies, to the role of cultural initiatives in building bridges with local populations, to the challenge of getting media outlets to report on positive humanitarian projects supported by the US abroad.  A charismatic and empathic public speaker, the Consul General portrayed her profession as both challenging and rewarding and left the participants with a clearer vision of the reality of a career in the Foreign Service.

We would like to thank the Consul General and the staff at the Consulate General of the United States in Barcelona for making this event possible.   We also wish to thank both our Career Development Mentor, Professor David Caminada, for arranging this enriching encounter, as well as his journalism students from the Universitat Pompeu Fabra for their participation. 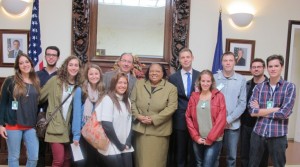 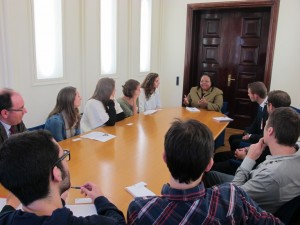